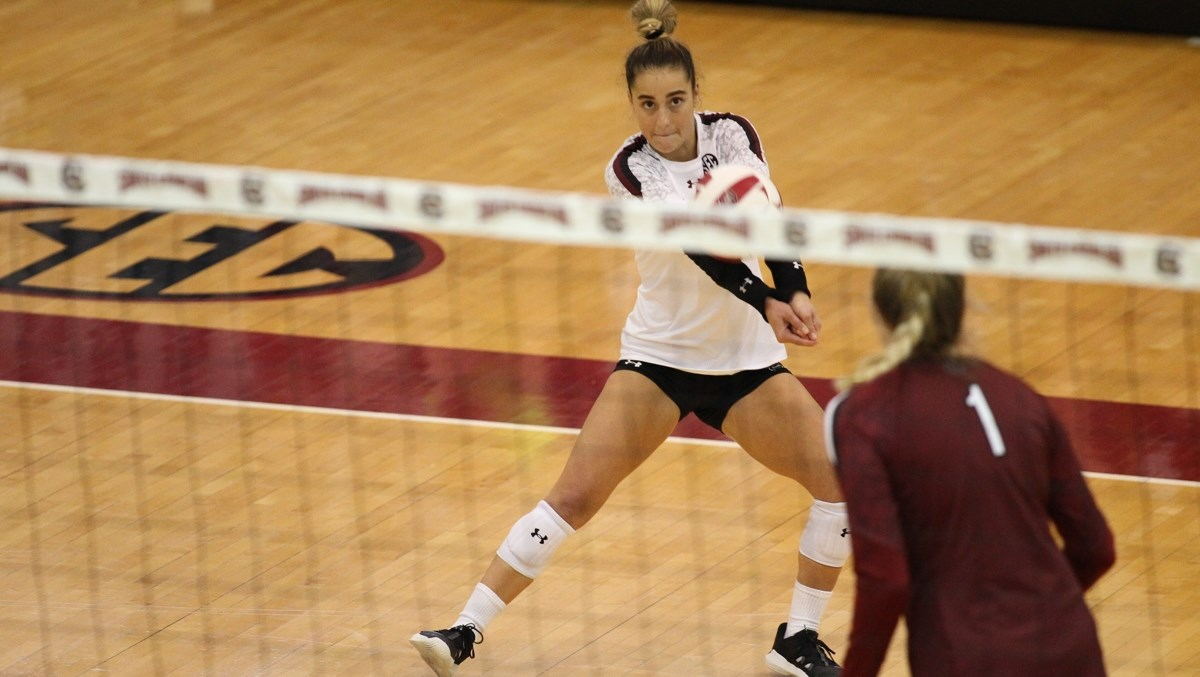 COLUMBIA, S.C. – The Gamecock volleyball team wrapped up the non-conference season Sunday night at home, defeating High Point (8-8) in four sets, 25-19, 26-24, 17-25, 25-18. Mikayla Shields led the team with 12 kills, and freshman Holly Eastridge put away a season-high 10 kills to lead the offense. After three wins this weekend, South Carolina begins its conference season with an 8-4 overall record.

SET ONE: South Carolina benefited from an error-prone High Point offense in the opening game, winning 25-19 despite hitting just .182. The Panthers committed eight unforced attack errors in the game, and coughed up a early lead because of it. Leading 15-12, High Point committed five errors on the attack and two on serve from that point on to allow the Gamecocks to close the set on a 13-4 run. Shields, Mikayla Robinson and Britt McLean all accounted for three kills in the set, and Robinson added a big solo block late to put the home side up 1-0.

SET TWO: The Gamecock offense put away a match-high 17 kills in the second set, and needed all 17 in a tight 26-24 decision. South Carolina built a modest 12-9 lead early and were able to string it along until the Panthers were able to run off a 5-1 burst late to take a 23-22 lead, their first of the entire set. The run was boosted by a trio of errors by the Gamecocks, but Jess Vastine helped the team reverse the negative trend with a pair of kills at 23-23 and 24-24 to give the team set point opportunities, and a High Point attack error would end the set at 26-24.

SET THREE: High Point dominated play in the third set, out-hitting South Carolina .308 to .056 for a 25-17 win to make it a 2-1 match. The Panthers had four blocks in the set, leading the Gamecocks to nine total attack errors, and the visitors built a 12-5 lead early. Strong service from Courtney Koehler helped to pare the lead down to one, 12-11, but High Point would not give up the lead and pulled away again with nine of the next 12 total points for its lone set win of the night.

SET FOUR: The offense’s struggles from the third would be erased in the final frame, as South Carolina committed no unforced attacking errors and hit .344 in a 25-18 win to clinch the match. The team’s right side attackers would shine brightest in the fourth, as Shields and Eastridge combined for seven of the team’s 14 total kills in the set and committed just one error between them. It would be a tight set early on, but Addie Bryant served the team to a 6-1 run that broke a 12-11 score into a comfortable 18-12 advantage and the Gamecocks rolled from there. Shields put down her fourth service ace of the night to set up match point, and Robinson followed with the kill for the final point.

UP NEXT: The team remains home next weekend as it opens the SEC season with matches Friday and Sunday. First is Georgia (8-3), winners of five straight heading into SEC play, on Friday at 7 p.m., airing nationally on the SEC Network. Sunday, the team hosts Auburn (6-5) at 1:30 p.m.