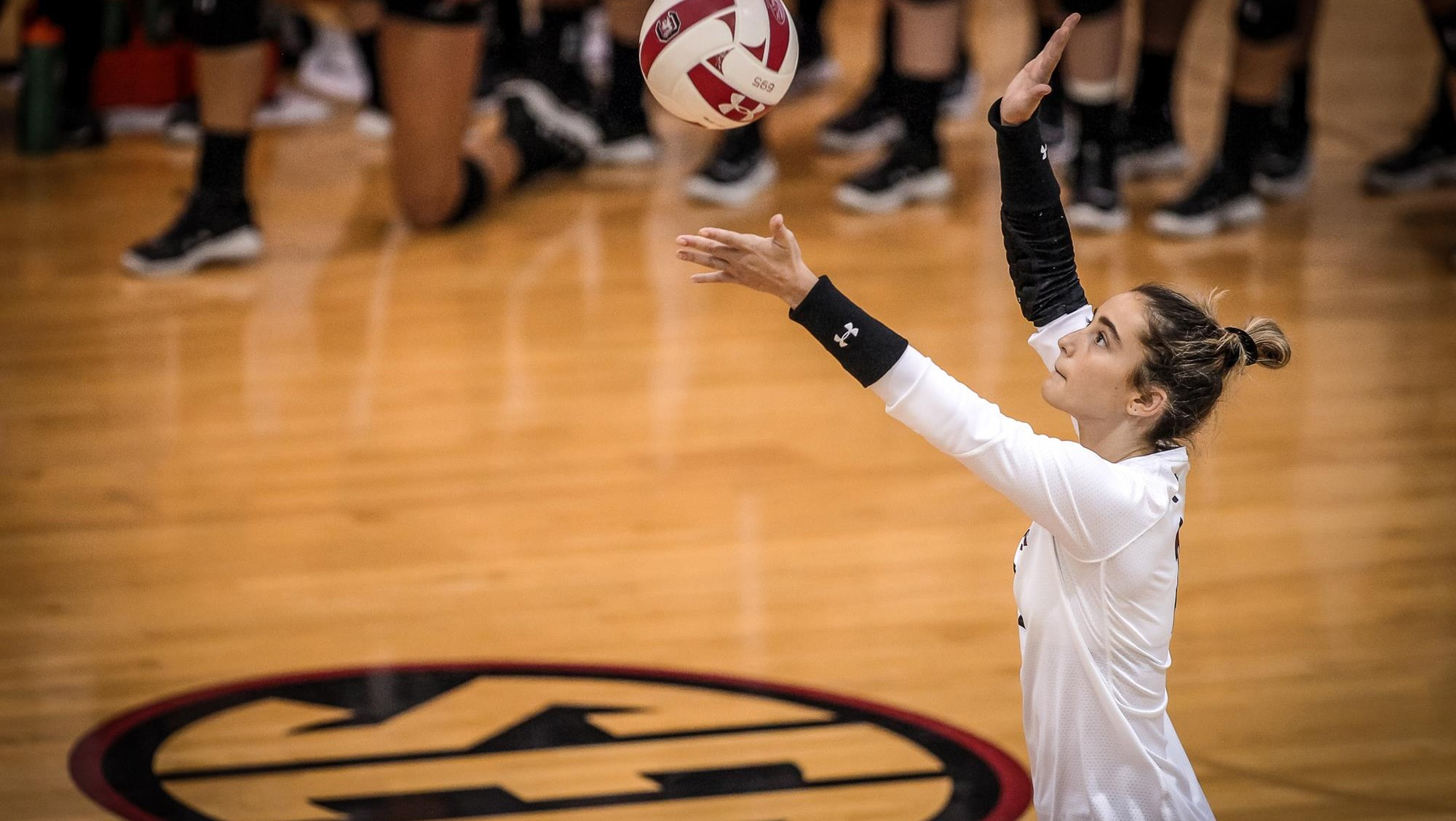 The team hosts Georgia Friday at 7 p.m. and Auburn Sunday at 1:30

COLUMBIA, S.C. – Fresh off an undefeated weekend at home to close non-conference action, the South Carolina volleyball team begins Southeastern Conference matches this weekend. The Gamecocks (8-4) host Georgia (8-3) Friday at 7 p.m. and Auburn (6-5) on Sunday at 1:30. Friday’s match will air nationally on the SEC Network, Sunday will be broadcasted on the SEC Network+ online streaming service.

General single-game tickets are on sale, $5 for adults and $3 for youth, with two ticket specials available for this weekend. Anyone attending Friday’s match with Family Weekend wristbands can get into the match for free, and as part of Teacher Appreciation Night, all University faculty or staff can get $1 tickets for themselves and one guest. Fans can also purchase season tickets at the General Admission rate for adults ($25) or youth age 17 and under ($10), or the VIP season ticket. Contact the South Carolina Ticket Office at 800-4SC-FANS (800-472-3267) or CLICK THIS LINK for more information.

A reminder, students attending matches at the Carolina Volleyball Center should note that their entrance to the facility has changed for 2019. Instead of entering through the Park Street side of the gym, students should now enter at the top of the building, located by the Blossom and Assembly Street intersection. Ticket holders should still plan to enter via the Park Street entrance.

Please refer to the PARKING MAP for a bird’s-eye view of the Carolina Volleyball Center and surrounding areas.

SCOUTING GEORGIA
Georgia comes roaring into the SEC season, winning five matches in a row to cap the non-conference portion of its season. Four of those five wins came against Power Five conference opponents, most recently with 3-1 wins over North Carolina State and Georgia Tech last weekend at home. On offense, Rachel Ritchie remains a focal point, leading the team with 3.23 kills and 8.35 attacks per set. Freshman Kacie Evans has complimented her from left side, averaging 2.81 kills, and senior Meghan Donovan runs the show with 11.41 assists per set, second best in the SEC. On defense, Georgia ranks last in the SEC for blocks, but does put tremendous pressure on opposing offenses with a service attack that ranks second in the SEC with 1.67 aces per set.

SCOUTING AUBURN
Auburn suffered some key losses to the roster after the 2018 season, losing its starting setter, both middle blockers and a freshman outside hitter to transfer over the summer. Added to that, the team also graduated Brenna McIlroy and her 1,288 career kills as well, but the team still put together a solid non-conference season with six wins entering SEC play. The emergence of two pin hitters – Enija Bidzane and Val Green – have helped the team’s offense, as the two played in just three matches combined in 2018 but currently rank first and second in total kills through 11 matches. On defense, the Tigers hold opponents to just a .174 hitting percentage and rank fifth in the SEC for digs, thanks in large part to libero Payton White’s 4.20 per set.

EDWARDS ENJOYING STRONG START TO SENIOR CAMPAIGN
Year four has started well for middle blocker Claire Edwards, who is on an early pace for a career year on offense and defense for South Carolina. Through 12 matches, Edwards already is averaging highs for points per set (2.44), aces (0.23), blocks (1.12) and hitting percentage (.353). Her efforts were recognized by the SEC on Sept. 9, when she earned Defensive Player of the Week honors from the conference after putting down 17 total blocks in 10 sets at the UCF Challenge tournament. It was not just her defensive prowess that helped the team in Orlando, though, Edwards also had eye-popping efficiency on offense in the three matches. She averaged 2.30 kills per set out of the middle and hit .463, committing just four attack errors total for the tournament.

SHIELD BEARER
Last season, Mikayla Shields became the fifth junior in the program’s 47-year history to make it to 1,000 career kills in three seasons or less. Overall, she is 15th member of the program ever to reach 1,000 kills, and the fourth-fastest (making it in her 80th career game). The last Gamecock to reach 1,000 kills was Juliette Thévenin in 2012. Currently, Shields ranks sixth overall for career kills (with 1,282) in the overall program record book, and third among rally-scoring-era attackers. She is 11 kills away from passing hall of famer Heather Larkin (1994-97) and entering South Carolina’s all-time top five.

It isn’t just her production that has been impressive, Shields is also in rarified air when it comes to efficiency. During the Gamecock Invitational tournament (Sept. 20-22), she passed 3,000 career attacks, something only six other members of the program have achieved. Despite the historic workload, Shields still maintains a career hitting percentage of .289, good for seventh in program history (with a minimum of 1,000 attacks). Among those six other hitters with over 3,000 attacks, only program legend Lori Rowe (1983-86) also ranks in the top ten all time for hitting percentage.

MISS 3,000
Senior Courtney Koehler has rocketed through the record book as she begins season four running the offense. Against Charlotte on Sept. 10, she surpassed Taylor Bruns’ record for most assists in the rally-scoring era (since 2001), and against High Point on Sept. 22 she passed 3,000 career assists. Only five other Gamecocks in the program’s 47-year history have reached 3,000. Scratching the top three marks from the sideout-scoring era will be a challenge, but Koehler is now 225 assists from jumping Jodi Thompson (1991-94) for the number five spot in the program’s all-time history.

HOME-COURT ADVANTAGE
The Carolina Volleyball Center has been one of the toughest venues in the country over the last three seasons. Of the program’s top ten crowds all time in the CVC, nine have come since 2016 and three of the top five came in 2018 alone. Last season, the Gamecocks went 11-2 in the CVC – its highest home win total since 2008. Through four home matches this season, the average attendance of 1,230 ranks 32nd in the NCAA and sixth among SEC schools.

VASTINE GROWTH BOOSTS LEFT SIDE ATTACK
Junior Jess Vastine saw her role expand greatly in head coach Tom Mendoza’s first year leading the program, developing more into a six-rotation left side attacker. Now in her second year with the defined role, the Wittmann, Ariz. native has made another big jump in production across the board. Already with a new career high for service aces in a season, with 14, Vastine is also on pace for personal bests in kills, and digs. Vastine also leads the team’s serve receive defense with 272 receptions and a .952 reception percentage.

REPLACING ACES WILL BE KEY FOR 2019

Despite bringing back all six position players for the fall, South Carolina will have to replace a key member of last year’s tournament team. Libero Aubrey Ezell graduated as the program’s third-ranked contributor for service aces, pitching in 212 during her four years on campus, including a career-high 75 last fall. Her career total was double that of any other member during the program’s rally-scoring era, and she guided 2018’s team to its highest combined ace total since 2006 (173). With her departure, the team is looking for who can help fill her shoes. Of the six starters returning this year (Edwards, Koehler, McLean, Robinson, Shields, Vastine), only Shields and Koehler have a career ace total above 60.

Through 12 matches, South Carolina is on the wrong side of both serving statistics – aces and errors. Entering Friday, the team has been out-aced 75-55 and committed 21 more errors on serve (115-94). Against Pitt on Aug. 31, the team recorded zero aces for the first time since Nov. 11, 2016 that the team went without an ace in a match – a span of 67 matches.