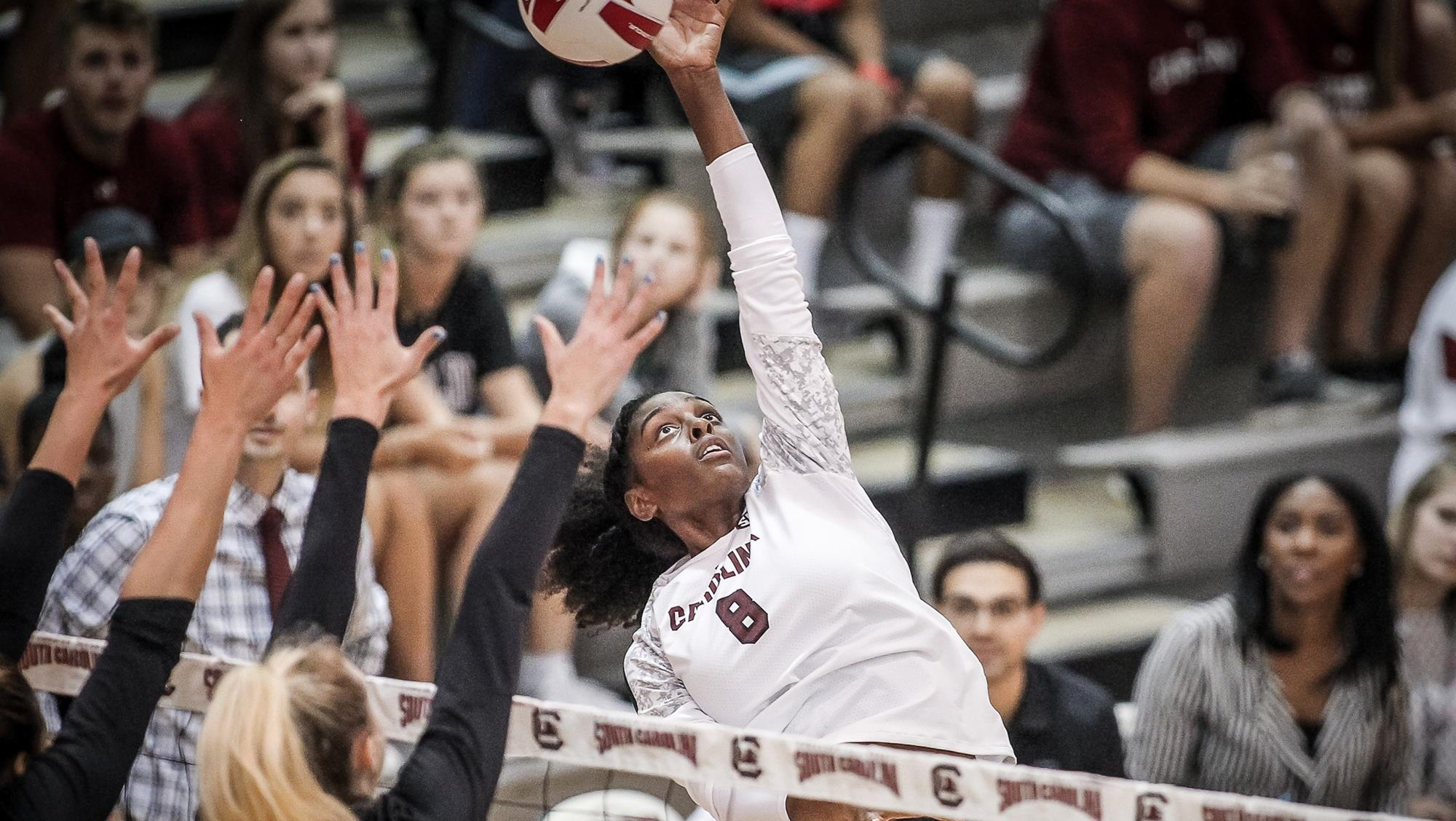 SET ONE: South Carolina was able to pull away from a tight early score to win the opening game, 25-22. Georgia held a 12-10 lead and were able to expand it out to 18-15 before the Gamecocks would rally. A kill from Mikayla Shields a block fromClaire Edwards and Jess Vastine sparked a 4-0 run that flipped the scoreboard to 19-18, and Mikayla Robinson sealed the win with a big solo block at 24-21 and her third kill of the set at 25-22.

SET TWO: Georgia copied the South Carolina recipe from set one to get a 28-26 win that evened the match. The Gamecocks pushed out to an early lead, 15-11, but the Bulldogs scored nine of the next 12 points to take back the lead. The visitors would be denied set point at 24-23 and 25-24, but were able to use back-to-back attack errors from South Carolina to get the win at 28-26. Both teams struggled offensively, each hitting under .100 as a team, but the Bulldogs won the battle of attrition with a 14-10 kill advantage despite 12 total attack errors.

SET THREE: The teams traded off early runs to begin the third set, but Georgia quickly took control with an 8-2 burst that turned a 5-2 Gamecock lead into a quick timeout from the home side, now down 10-7. Georgia was able to string the lead along until late, when South Carolina had a glimmer of hope that it could steal away the game. Trailing 23-20, the Gamecocks used a pair of Shields kills, a block from Courtney Koehler and Robinson, and a service ace from Alicia Starr to tie the set up at 24, but couldn’t close out the comeback bid in a 27-25 loss to fall back 2-1 in the match.

SET FOUR: South Carolina responded with its strongest all-around effort of the night in the fourth set, dominating offensively and defensively in a 25-19 win to send it to five. The Gamecocks out-hit Georgia .312 to .161 and recorded four blocks in the game, breaking out of an 8-all tie with a 4-0 run behind the serve of Claire Edwards and never looking back. Shields led the team with five kills in the set.

SET FIVE: Another strong start for the home side in the fifth had the crowd of over 1,400 fans energized, but the two sides again would trade momentum swings early. A 5-1 start to the set for the Gamecocks forced an early timeout from Georgia, but it would answer back with a 6-2 run of its own to even the set a 7-7. Addie Bryant served Carolina a 5-0 run immediately after, keeping the Georgia offense out of system and inducing four attack errors in that span, but the Bulldogs closed the set with an 8-1 run in a 15-13 win.

NEXT UP: The team remains home to cap week one of conference play, hosting Auburn Sunday at 1:30 p.m. The Tigers lost in three sets at Florida Friday night. The match will air on the SEC Network+, with Derek Scott and Paul MacDonald on the call.