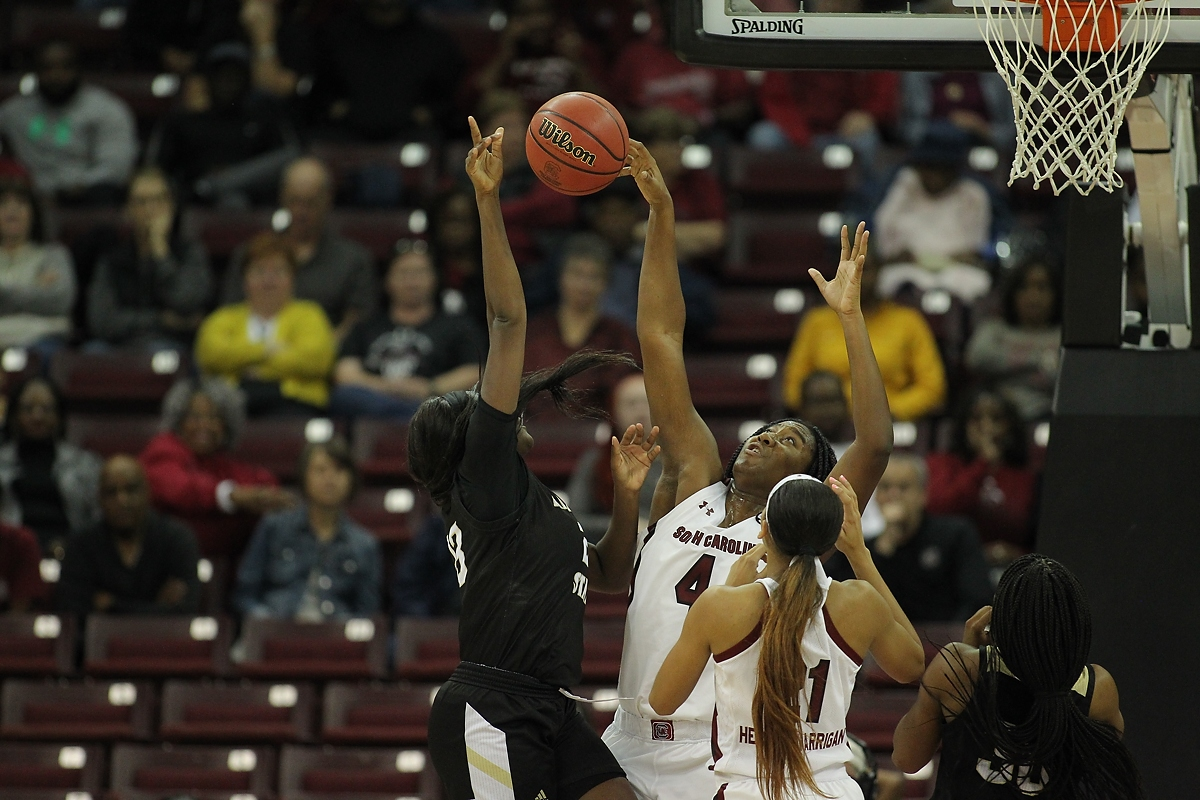 COLUMBIA, S.C. — No. 8/10 South Carolina women’s basketball handled its business against the Alabama State Hornets, winning 103-43 at Colonial Life Arena on Tuesday night. Freshman Aliyah Boston got her college career started with a triple-double scoring 12 points, pulling down 12 rebounds and blocking 10 shots. It is only the seventh triple-double in program history, and the first by a freshman.

Senior Mikiah Herbert Harrigan and freshman Zia Cooke tied for the team scoring lead with 13 points each. Harrigan tallied five rebounds as well, while Cooke finished with two steals. Boston’s 12 points tied for third on the team tonight, while senior Tyasha Harris poured in 11 and dished out a team-high four assists. Freshman Olivia Thompson joined in on the impressive debuts scoring 10 points, and junior LeLe Grissett rounded out the double-digit scorers with 10 points and seven rebounds.

Carolina opened the game on a 10-0 run fueled by five quick points from Boston. The Hornets got on the board with 5:15 left in the first and rattled off an 8-2 run to make it 12-8, but back-to-back buckets from sophomore Destanni Henderson put an end to the surge and helped Carolina close out the first quarter with a 17-11 lead.

After trading buckets in the opening moments of the second period, freshman Brea Beal drained a three, the first field goal of her career, to kick off a 15-5 run to close out the half. Four other Gamecocks added to the surge with Henderson and Herbert Harrigan each hitting a three, four quick points from redshirt-freshman Laeticia Amihere and a jumper from Cooke with two seconds left on the clock to send the Garnet and Black into the break with a 42-24 lead.

The Gamecocks came out on fire in the third. Boston opened the frame with a jumper, followed by a bucket from Herbert Harrigan. After an Alabama State bucket at the 9:20 mark, Carolina clamped down and scored 20 unanswered points to take control of the game and head into the fourth with a 79-33 lead. Carolina outscored the Hornets 39-9 in the third.

Entering the fourth, Boston had already broken the record for blocks in a game by a freshman with her ninth denial in the third, and, with just over a minute into the fourth, she notched her 10thh, securing the triple-double and tying the program single-game block record. Carolina kept its hot hand in the final frame, helped by Thompson entering the game and tallying 10 points in just seven minutes on the court. The Gamecocks used 24 points off the bench in the fourth to cruise to a 103-43 win.

Entering tonight’s game only six Gamecocks had tallied triple-doubles in program history, and none of those came from a freshman. Boston changed that, with her 12-point, 12-rebound, 10-block outing.

The Gamecocks pulled away in the third quarter, outscoring Alabama State 39-9. Carolina shot 57.1 percent from the field in the third and kept that rolling into the fourth, when the Gamecocks shot 66.7 percent.