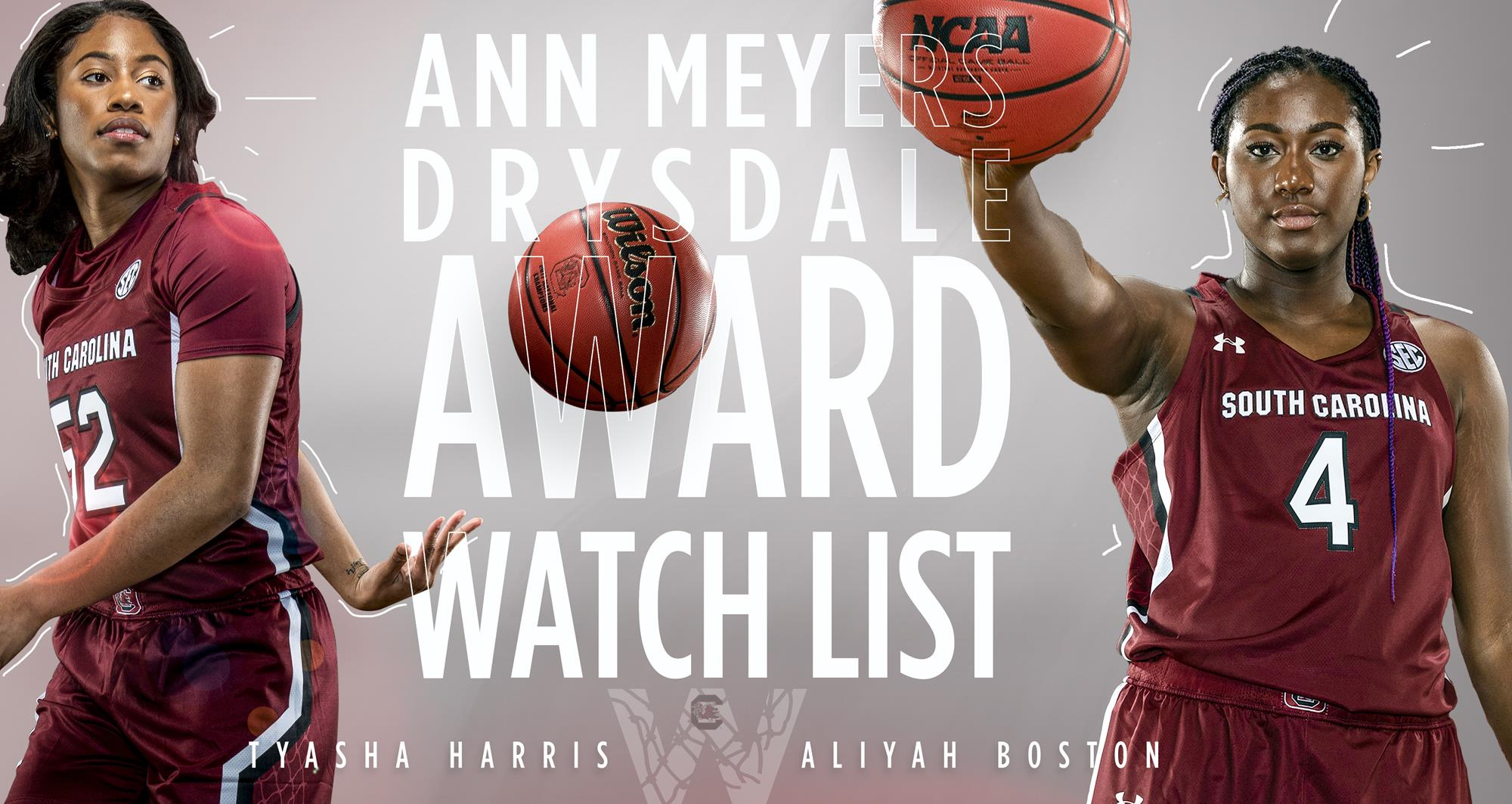 Share
COLUMBIA, S.C. – South Carolina women’s basketball senior guard Tyasha Harris and freshman forward Aliyah Boston are two of the 35 players named to the 2019-20 Ann Meyers Drysdale Award Watch List, the U.S Basketball Writers Association announced today. It is the fourth national player of the year watch list for Harris this season, while Boston makes her debut and is the only freshman on the list.

Also on the watch list for the Nancy Lieberman Award, which recognizes the top point guard in the country, Harris leads the SEC with 4.9 assists per game and is scoring a career-best 11.2 points per game so far this season. She has four games of five or more assists, including a season-high seven in the Gamecocks’ win over then-No. 2/2 Baylor (Nov. 30), and has scored in double figures in six of her nine games. Shooting 37.0 percent from 3-point range, she is second on the team in long-range accuracy. In her career, Harris is one of four Gamecocks all-time to amass 1,000 points and 500 assists in her career. She is currently third in program history with 557 career assists.

Boston exploded onto the college basketball scene with the NCAA’s first triple-double in a career debut and has not slowed down. She has four double-doubles in nine games and is the only Gamecock to score in double figures in every game this season. Her 73.0 percent field goal shooting ranks second in the country, and her 3.1 blocks per game are seventh. Boston has earned SEC Freshman of the Week honors in three of the season’s four weeks and was named USBWA National Freshman of the Week this week following her Paradise Jam Reef Division MVP performances, which included a 20-point, 13-rebound outing against then-No. 2/2 Baylor (Nov. 30).

The 2019-20 Ann Meyers Drysdale Award winner will be presented at the 2020 NCAA Women’s Final Four in New Orleans, along with the Tamika Catchings Award honoring the women’s freshman player of the year. The winner will also be honored at the annual USBWA Awards Luncheon at the Missouri Athletic Club in St. Louis on Mon., April 13, 2020.

No. 6/7 South Carolina is back on the road this weekend, heading to Philadelphia to take on Temple at 3 p.m. on Sat., Dec. 7. The Gamecocks return to Colonial Life Arena for the first time in five games on Sun., Dec. 15, to face Purdue at 2 p.m.