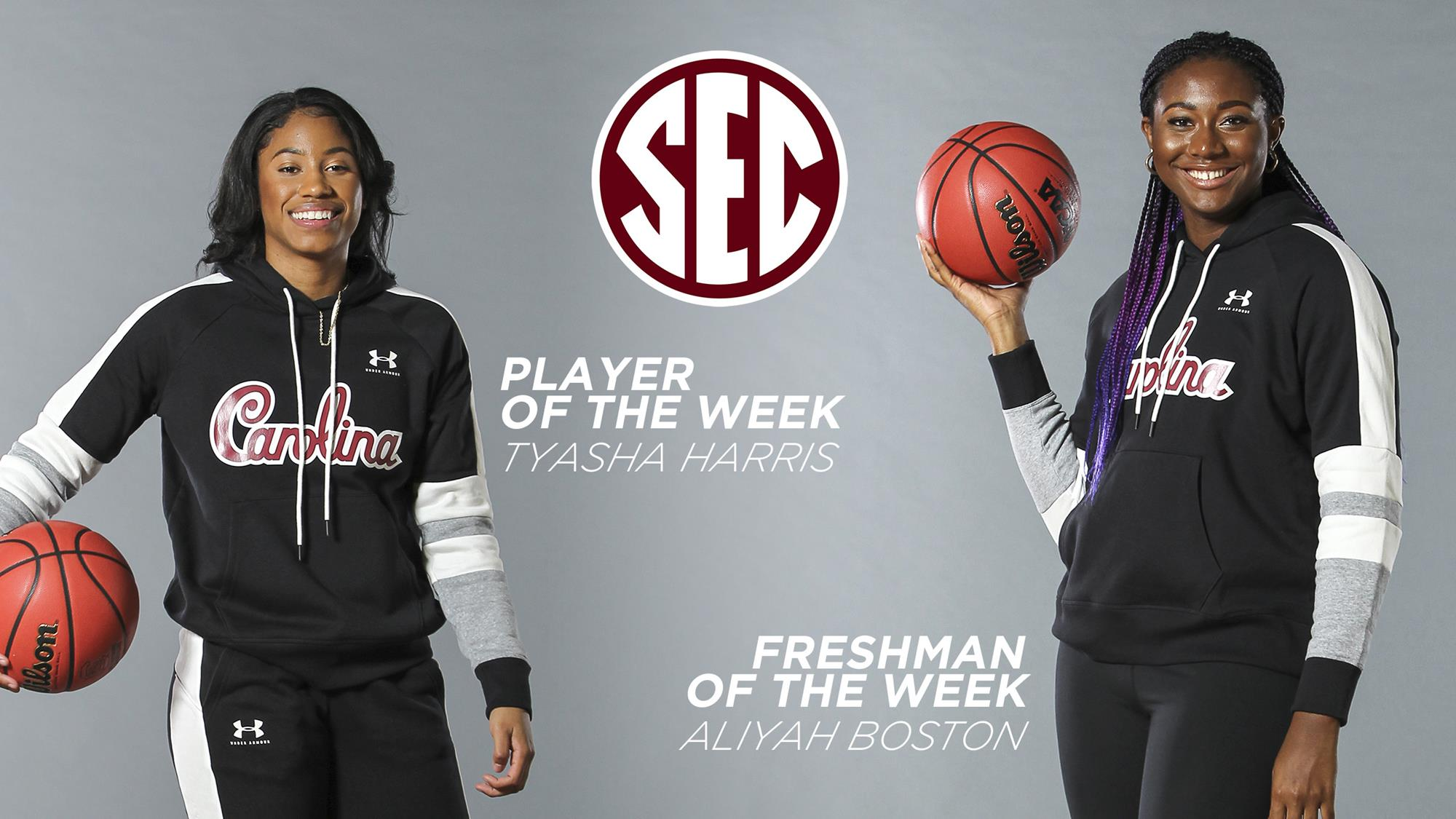 COLUMBIA, S.C. – After leading South Carolina to a pair of wins over ranked opponents, senior guard Tyasha Harris and forward Aliyah Boston captured SEC Player and Freshman of the Week recognition, respectively, the league office announced today. It is Harris’ second selection in the last three weeks and Boston’s fifth on the season. The USBWA also named Boston its National Freshman of the Week for the second time this season.

Harris averaged 14.0 points and 8.0 assists over the two games, notching her 10th career double-double with a 19-point, 11-assist effort against No. 5/6 UConn on Monday night – putting her hands on 67.1 percent of the Gamecocks’ offense. Continuing her mastery of guiding a young Gamecock team to the No. 1 national ranking, she leads the SEC in assists per game (5.5) and assist-to-turnover ratio (2.6), including a turnover-free 40 minutes against the Huskies. She posted six points and six assists in the second quarter alone, and had a personal 10-2 run to close the first and open the second quarter against the Huskies. In Thursday’s game at No. 25/- Arkansas, she had six points, five assists and four rebounds in the first half to guide the Gamecocks to a 13-point halftime advantage.

Boston netted her ninth and 10th double-doubles of the season last week, her fourth back-to-back double-double outings of the season. In her first consecutive double-doubles against ranked opponents, she averaged 15.5 points and 13.5 rebounds, including 6.0 offensive rebounds per game, and blocked 4.5 shots per game. Boston dominated at No. 25/- Arkansas, scoring 10 of her 18 points against the Razorbacks off her offensive rebounds and nearly reaching her double-double by halftime (12 pts/9 rebs). Her seven blocks against the Razorbacks was one shy of the program’s record for blocks in an SEC game. Against No. 5/6 UConn, Boston reeled in nine of her 12 rebounds in the first quarter as the Gamecock defense, which included her two blocks and two steals, allowed just two points on 1-of-16 shooting in the opening period.

The No. 1/2 Gamecocks continue a four-game homestand on Thu., Feb. 13, against Auburn. Tipoff at Colonial Life Arena is set for 7 p.m. with the game airing on SEC Network.