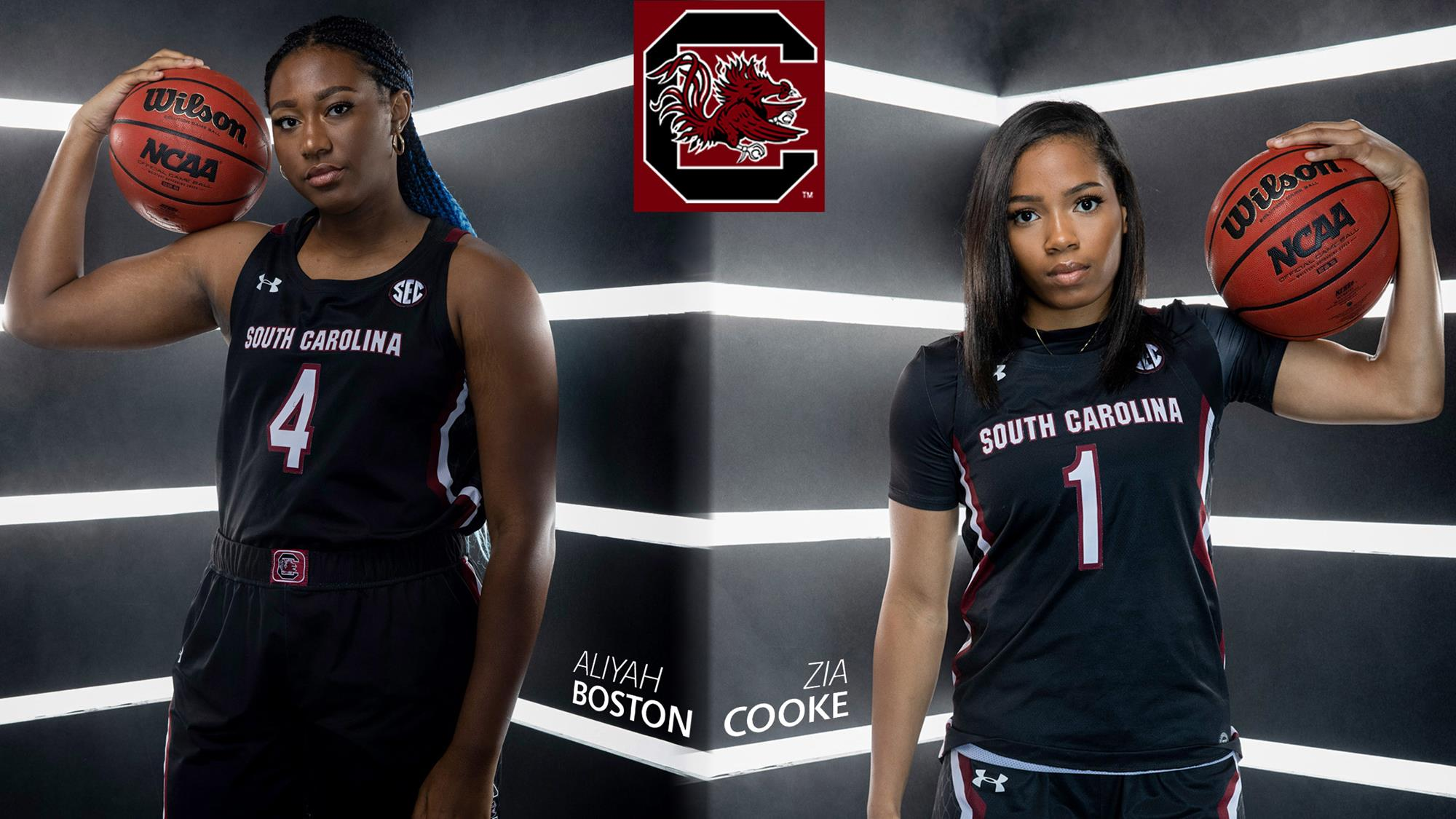 Share
COLUMBIA, S.C. – South Carolina women’s basketball sophomores Aliyah Boston and Zia Cooke were named to the John R. Wooden Award presented by Wendy’s Women’s Midseason Top 25 Watch List, announced last night on ESPNU. They are the Gamecocks’ top two scorers this season and are two of the nine SEC entries on the list, more than any other conference.

Boston is averaging 12.8 points and 10.5 rebounds on the season, registering six double-figure scoring and four double-digit rebounding games already. Her 10.5 rebounds per game rank 27th in the nation and are third in the SEC. She is one of two SEC players to average a double-double AND rank among the league’s top 10 in blocked shots as her 1.6 blocks per game come in sixth.

Cooke has been the most consistent performer for the Gamecocks this season, scoring in double figures every game and shooting 51.4 percent from 3-point range. She is fourth in the SEC in scoring both overall (18.8 ppg) and in SEC play (22.0 ppg). She has led the Gamecocks in scoring four times, including a pair of 20-point outings. Cooke is sixth in the SEC in made 3s per game (2.3) and ninth in free throw percentage (.813). Cooke is second on the team in assists, handing out 3.0 per game, including four games of four or more assists.

Chosen by a preseason poll of national college basketball experts based on their performances during the 2020-21 season thus far, the players on the list are considered strong candidates for the 2021 John R. Wooden Awards Women’s Player of the Year presented by Wendy’s. Players not chosen to the preseason or midseason list are still eligible for the Wooden Award National Ballot. The National Ballot consists of 15 top players who have proven to their universities that they meet or exceed the qualifications of the Wooden Award. Voters will rank in order 10 of those 15 players when voting opens prior to the NCAA Tournament and will allow voters to take into consideration performance during early round games. The Wooden Award All-American Team will be announced the week of the Elite Eight round of the NCAA Tournament. The winner of the 2021 John R. Wooden Award will be presented by Wendy’s following the NCAA Tournament in April.

The Gamecocks opened the season 3-0, including a win over #21/20 Gonzaga last weekend to clinch the title at the Women’s Bad Boy Mowers Crossover Classic. #1/1 South Carolina hosts #8/8 NC State at Colonial Life Arena on Thu., Dec. 3, at 7 p.m. The game will air on ESPN2.