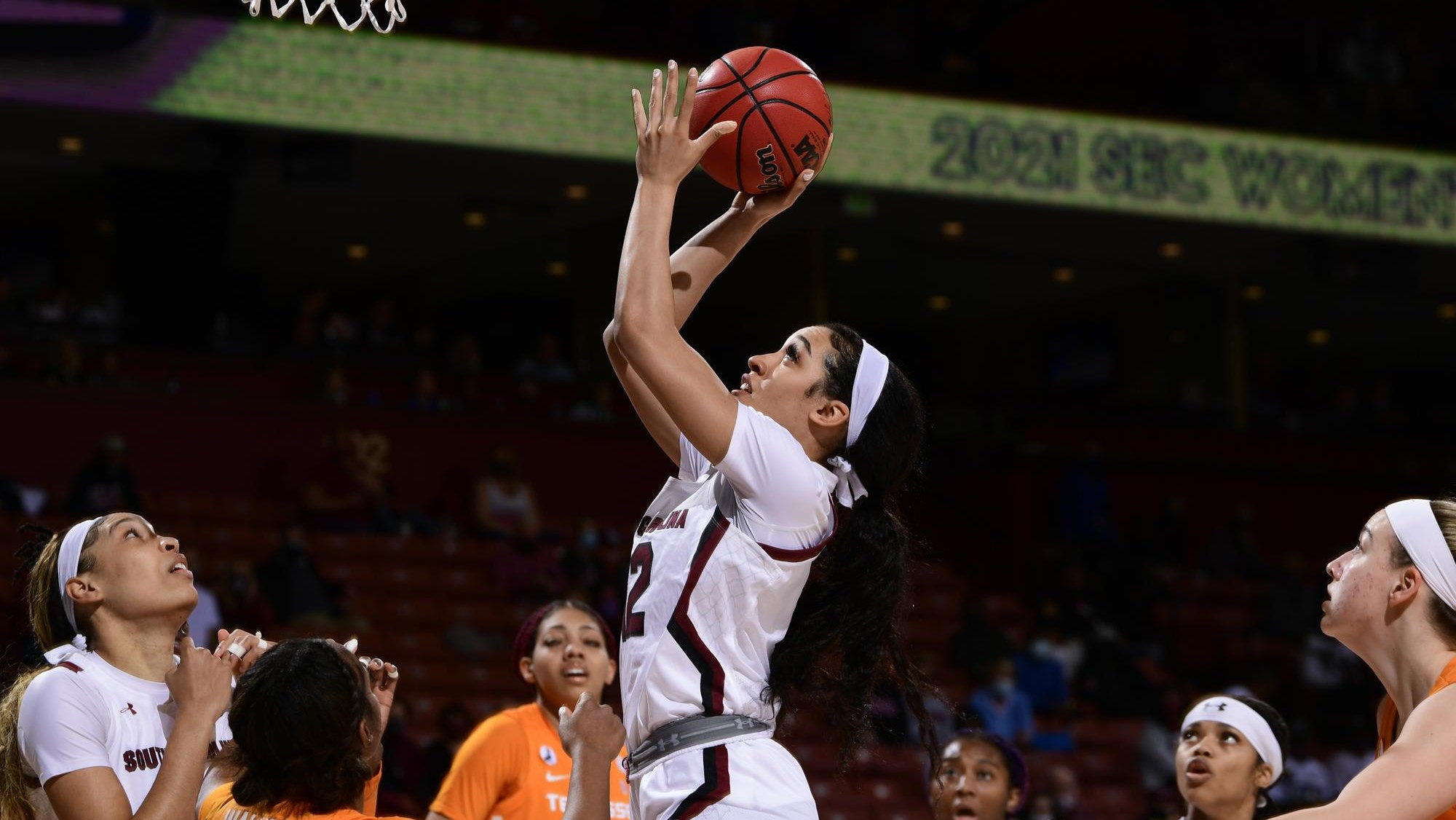 GREENVILLE, S.C. (AP) Zia Cooke scored 17 points and Aliyah Boston had 15 points and 11 rebounds as No. 7 South Carolina rolled past No. 14 Tennessee 67-52 Saturday night and into the SEC Tournament title game for the sixth time in seven years.

The defending champion Gamecocks (21-4) will seek their sixth tournament crown since 2015 on Sunday against No. 16 Georgia, which beat top-seeded and No. 2 Texas A&M 74-68 in the other semifinal.

This semi was never close once South Carolina took off on a 19-2 burst to close first quarter for a 29-13 lead.

Unlike the first meeting between these teams – Tennessee rallied from 16 down to hand South Carolina its first SEC loss in two seasons – the Gamecocks kept the pressure up throughout.

Tennessee (16-7) was trying for its first finals appearance since 2015. That year it lost the title to upstart South Carolina, the beginning of Gamecock dominance over the SEC that doesn’t appear to be ending yet.

Boston and Cooke made that clear with their play throughout this one.

Boston, the 6-foot-5 low-post powerhouse, showed off her outside game with a pair of 3-pointers to go along with three assists, two blocks and a steal.

Cooke also had a pair of 3s and continually buzzed through the Tennessee defense for baskets.

South Carolina took control with its early run. The Lady Vols were in front 11-10 on Rennia Davis’ 3-pointer midway through the period when the Gamecocks took off on their game-breaking surge.

South Carolina, though, isn’t always comfortable playing from way ahead.

The Gamecocks led at Tennessee 37-21 on Feb. 18 before the Lady Vols rallied for a 75-67 victory. And in Friday’s quarterfinals, South Carolina opened a 27-point lead on Alabama in the first 15 minutes, then saw the Crimson Tide cut things to seven points in crunch time.

The Gamecocks weren’t going to let this one slip away. Destanni Henderson hit a jumper to start the third quarter and Boston followed with her second 3.

The Lady Vols appeared to be dragging a bit after a hard-fought, 77-72 win over Mississippi on Friday night, coming from six points down in the fourth quarter.

Davis, who had 33 points and 14 rebounds against Ole Miss, finished with nine points on 3-of-12 shooting.

Jordan Walker and Jordan Horston had 11 points each to lead the Lady Vols. Tennessee was held to its fewest points of the season.

Boston’s double-double was her second straight in the tournament and 27th of her career.

Tennessee: The Lady Vols used to own this event, winning 17 times between 1980 and 2014. Now, their run of missing the finals has grown to six straight years. Tennessee will have some work ahead to prepare for what they hope is a deep NCAA Tournament run.

South Carolina: While the Gamecocks have a 13-game win streak over Georgia, the Bulldogs are showing patience, versatility and their own ability to regroup quickly as they did to defeat Texas A&M.

GAMECHANGER
Trailing 11-10 at the 4:38 point of the first quarter, sophomore Aliyah Boston drained a three to jumpstart a 19-2 run over the final 4:18 of the quarter that put the Garnet and Black in front for good. Senior LeLe Grissett accounted for four points in the run, while sophomore Zia Cooke scored the final six points of the quarter herself.

KEY STAT
The Gamecocks won the turnover battle on Saturday, 18-13, and capitalized on those to the tune of 19 points, eclipsing the six points off turnovers tallied by the Lady Vols.