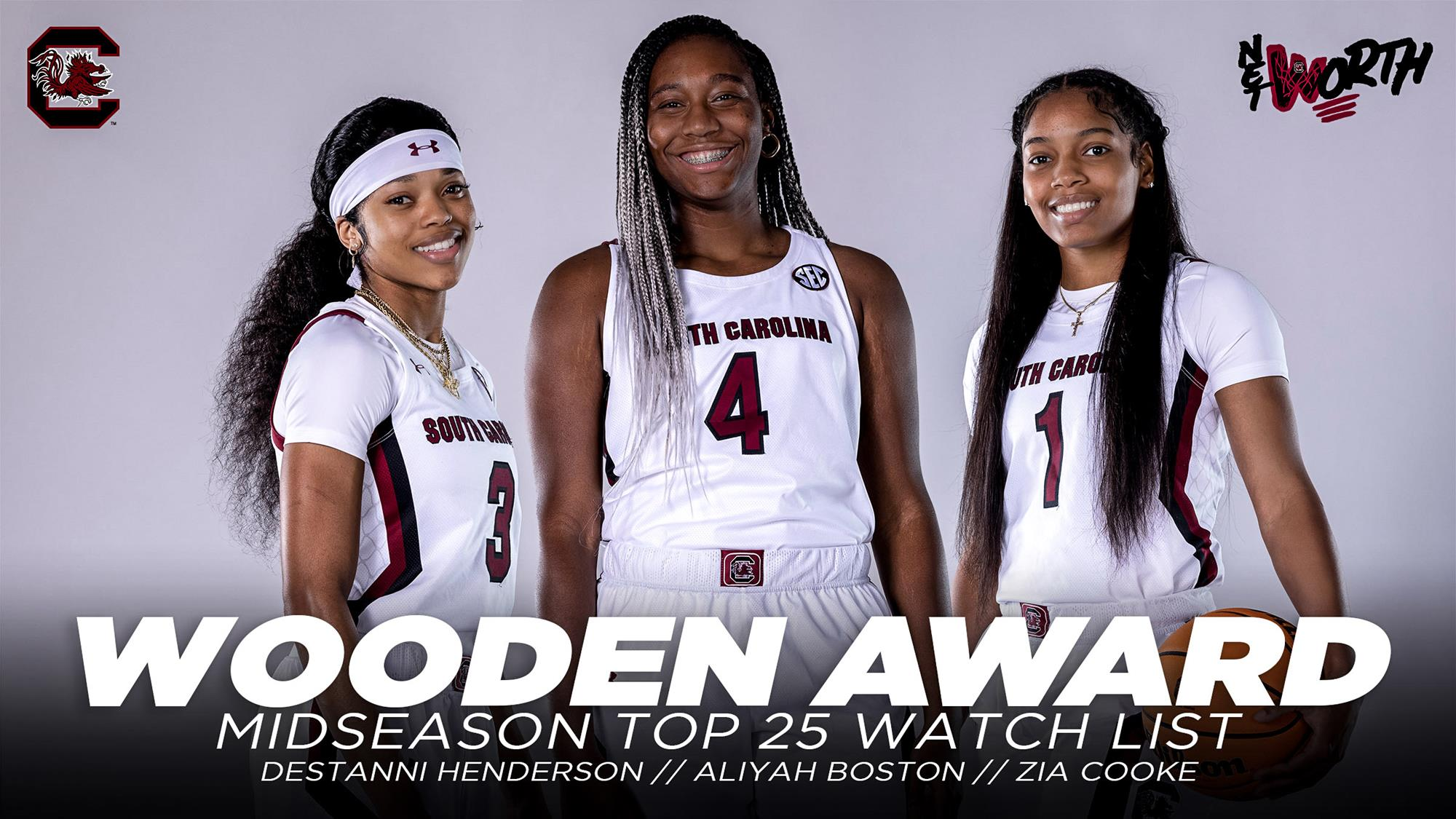 Share
COLUMBIA, S.C. – South Carolina women’s basketball boasts a trio on the John R. Wooden Award presented by Wendy’s Midseason Top 25 Watch List, the Los Angeles Athletic Club announced today on ESPNU. Aliyah Boston, Zia Cooke and Destanni Henderson are among the seven SEC players on the list, the most of any league. The Gamecocks are the only team to have three entries.

A finalist for the award last season, Boston continues to be a frontrunner for national player of the year honors with 16.9 points and 10.4 rebounds per game. The 6-foot-5 junior is sixth in the country with eight double-doubles this season, including a current streak of seven straight. Her .575 field goal percentage is 25th in the nation, and she is 10th in blocks per game at 3.1. Her rebounding average is 22nd in the country, and she is 23rd in defensive rebounds with 7.1 per game. Boston’s scoring and rebounding lead the Gamecocks and are among the top 10 in the SEC. She has scored in double figures 12 times through 14 games, including a team-high four 20-point outings. In six games against ranked opponents, she is pouring in 16.5 points and 11.7 rebounds per game.

Cooke was part of the 2021 Wooden Award Late Season Top 20 and earned Preseason All-America honors entering this season. She is second on the team in scoring at 11.8 points per game and leads the team with a .727 free throw percentage. The junior guard has scored in double-figures nine times through 14 games, including a pair of 20-point outings. She was the top scorer in three of the Gamecocks’ six top-15 wins already this season.

Henderson is making her debut on the national player of the year watch list scene this season after a junior season that saw her lead the SEC in assists per game. The senior point guard is currently second in the league with 5.3 assists per game, and her 2.3 assist-to-turnover ratio is sixth. She has handed out five or more assists eight times in her 10 games played, including at least seven in each of the three games following her return from a left leg injury. Henderson is the team’s top 3-point shooter, hitting 40.0 percent from behind the arc, and she is handy on the glass as well with 4.3 rebounds per game, highlighted by a 14-rebound effort against Mississippi State on Jan. 2. Defensively, she is a tireless ball hawk who ranks ninth in the SEC with 2.0 steals per game.

The players on the Midseason Top 25 Watch List are considered strong candidates for the 2022 John R. Wooden Award Women’s Player of the Year presented by Wendy’s. The National Ballot will consist of 15 top players who have proven to their universities that they meet or exceed the qualifications of the Wooden Award. Voters will rank in order 10 of those 15 players when voting opens prior to the NCAA Tournament and will allow voters to take into consideration performance during early round games. The Wooden Award All-American Team will be announced the week of the Elite Eight round of the NCAA Tournament. The winner of the 2022 John R. Wooden Award will be presented by Wendy’s following the NCAA Tournament in April.