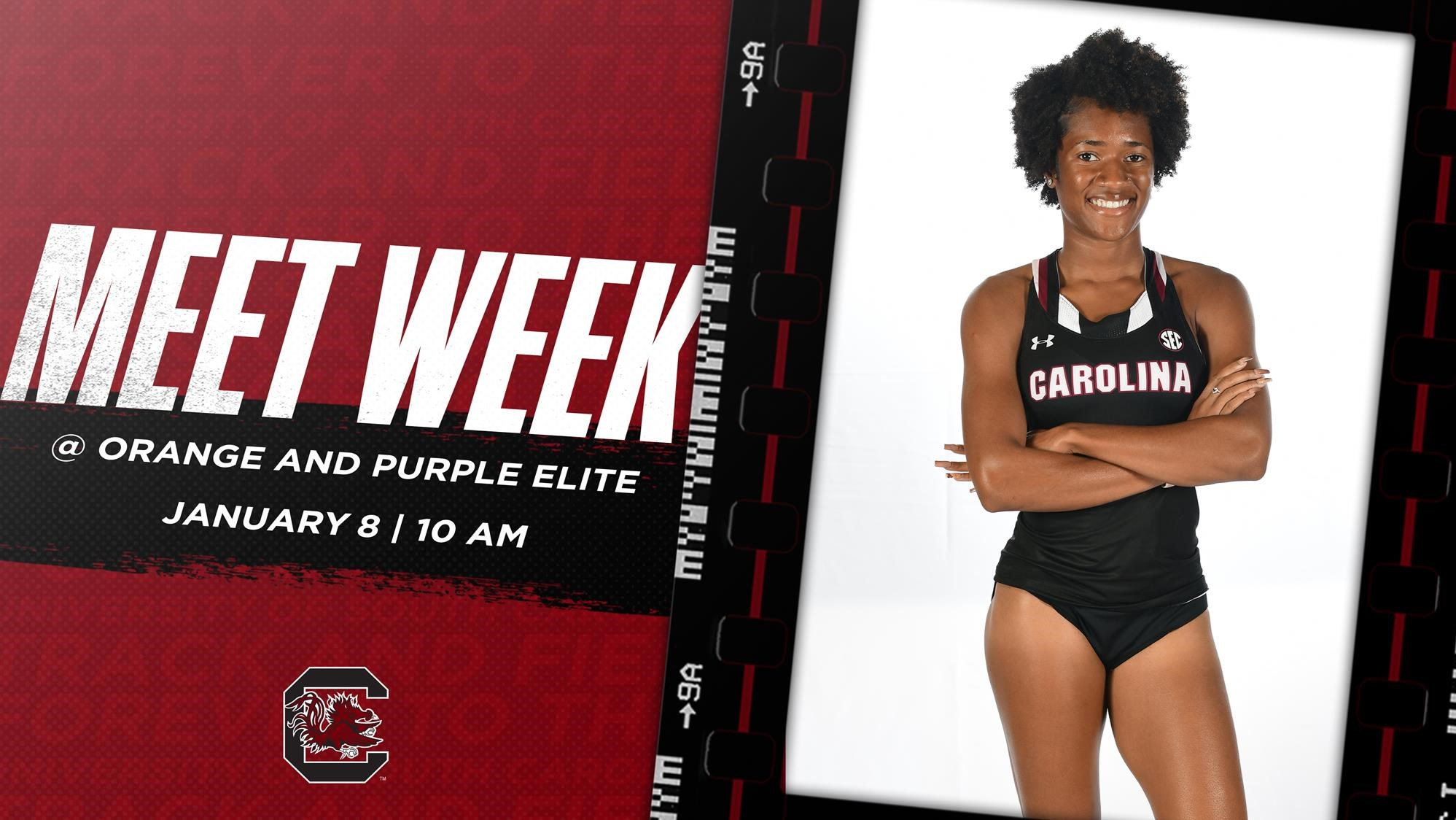 COLUMBIA– The South Carolina track and field squads kick off the new year with a trip to Clemson for the Orange and Purple Elite on Saturday. It is the second straight trip to Clemson to start the 2022 season. The Gamecocks kicked off their season at the Clemson Opener on Dec. 3.

Coming into the new calendar year, the Gamecocks have six top-five performances in the country, including top marks from William Spencer Jr. and the women’s 4X400-meter relay team. Several Carolina athletes are set for their season debuts as well in Clemson.

Last Time Out
The Gamecocks opened their season on Dec. 3 at the Clemson Opener with a limited competition roster.

Jayla Jamison, a true freshman for the Gamecocks, made her collegiate debut in style. She ran a time of 7.30 in the 60 meters, a time that immediately put her at No. 7 in school history in the 60 meters. Jamison’s time was also the collegiate lead at the time of her performance. She now sits at No. 2 in the country in the women’s 60 meters.

William Spencer Jr. also threw down a nation-leading performance in the men’s 400 meters. He ran a time of 47.14 to win the event and claim the NCAA lead. His time still stands as the top time in the country heading into 2022.

Destinee Rocker showed she hadn’t lost any momentum from her Second Team All-American season in the 60-meter hurdles in the 2021 campaign. She ran a time of 8.18, which was just .05 second off her PR in the event. She is at No. 2 in the country in the event.

The women’s 4X400-meter relay team also threw down an NCAA-leading time in the first competition of the new season. The team of Jahnile Registre, Alysia Johnson, Stephanie Davis and Angel Frank ran a time of 3:37.52 to win the event and claim the NCAA lead.

Head Coach Curtis Frye on the Meet
On the feeling he has headed into 2022
“Anytime we start track meets, I’m excited. I’ve been getting this excited feeling since I was 14 years old. It’s the same feeling I get when I get ready to go to a high school or college track meet. Somebody’s got to go through that feeling whether it’s me or someone else. It could be in high school, college or getting ready to qualify for the NCAA Championships. From having expecting to score at Nationals to scoring to becoming an NCAA champion, the steps are a little bit like life. That journey through middle school to hgh school and breaking from class to class. All of those are phases. As someone who has been in sports as long as I’ve been in sports, it gives me the same chill in your spine or tickle in your stomach that this is a new group and you’ve got to feel the anticipation they have and the fear in their eyes. Fear is natural and I’m just going to let them know the guy next to them is having the same fear.”

On what he is looking for from his athletes at the Orange and Purple Elite
“Our results is based on the answer to this: ‘Did you go home and practice? Did you do the workouts the coaches gave you?’ We also look at how we are compared to the December meet for some. Then for some people, it’s their openers and that gives some evaluation. It’s a quiz. You’ve got a final that’s coming up six weeks from now.”

On managing expectations early in the season
“We manage them. That’s why we have fall workouts that give us indicators after each cycle of work. If you go home for six weeks and didn’t work, then you go in the wrong direction. It’s how far in that direction did you go? It’s an evaluation. How quickly can we change the painting? We’ve got canvas, but we’ve still got to have quality paint.”

Ringing In the New Year On Top
The Gamecocks brought in 2022 with a handful of top marks in the country after just one weekend of competition.

Carolina owns six top-five marks in the NCAA as the schedule gets underway in the new year.

Phenomenal Freshmen
The Gamecocks have a young core of student-athletes and added to that core with their freshman class.

On the men’s side, the sprints class brings in Prescott Jefferson, a Columbia native. Anthony Greenhow Jr. and Dominic Dutton add to an already talented group. Carson Lenser brings versatility as a multis athlete and Jaden Price-Whitehead adds to the strength of the jumps group. Rogerio Amaral, a Portugal native, already showed he will contribute in the distances, winning the Clemson Opener’s 3,000 meters.

On the women’s side, a strong group of sprinters help reinforce the Gamecock roster, which saw the women’s 4X400-meter relay teams finish as First Team All-Americans indoor and outdoor in 2021. Jayla Jamison, Jahnile Registre, Aaliyah Pyatt and Tierra Frasier add a strong quartet in the sprints group. Lily Weeks and Syrah Ghijselings contributed during the cross country season and figure to do the same on the track.

Back on the Track
Saturday’s action on the track marks the second meet of the season and the first of the 2022 calendar year.

The Gamecocks have 18 meets left on the schedule for the 2022 campaign. Seven of Carolina’s competitions come at home. Four meets are slated at the Carolina Indoor Track and Field Complex. Three consecutive home weekends round out January with the indoor home finale set for Feb 18.

Three meets are set to take place at the Sheila and Morris Cregger Track this spring. Weems Baskin returns on March 25-26 and then two consecutive weekends in April wrap up the Carolina home slate.

SEC meets are hosted by Texas A&M (indoor) and Ole Miss (outdoor) in 2022. The NCAA Indoor Championships return to the Birmingham Crossplex and the NCAA Outdoor Championships will be in Eugene, Oregon, for the second consecutive year.