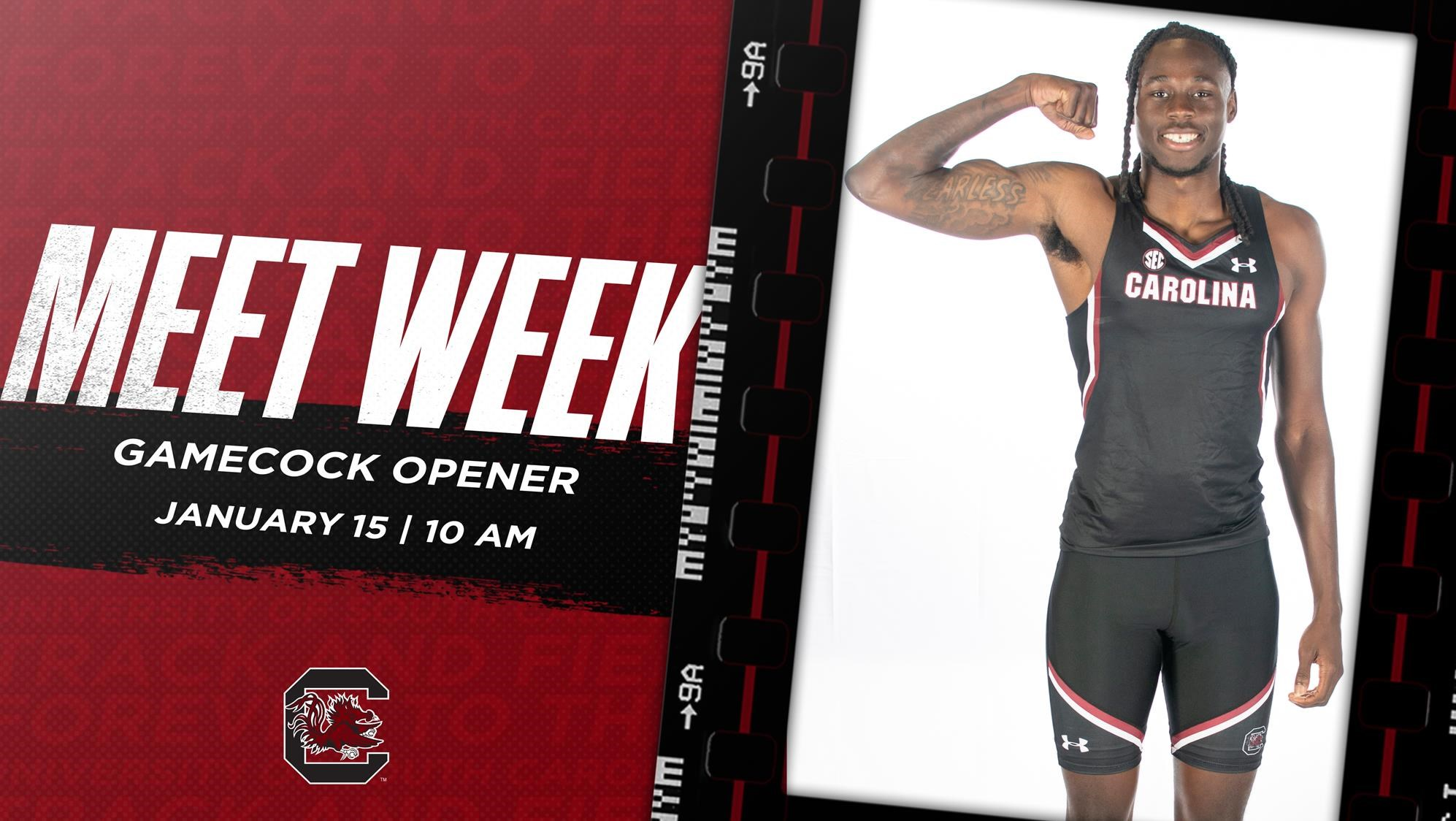 COLUMBIA– The South Carolina track and field teams return home for the first home track meet of the season. The Gamecock Opener marks the first of seven home meets for South Carolina, a slate that includes four indoor home meets. The Gamecocks are coming off a trip to Clemson for the Orange and Purple Elite where they grabbed 11 event victories.

Spectators are allowed at the Carolina Indoor Track and Field Complex. Tickets are $10 for adults, $5 for kids 17 and under and children 2 and under are free. Tickets are cash only and seating is limited. Masking will be required and fans will be restricted to non-team areas.

Fans who can’t make it to the Carolina Indoor Track and Field Complex can follow along with updates on Twitter @GamecockTrack. A full recap will be posted on Twitter, Facebook and GamecocksOnline.com. Live results can be found here.

Meet Schedule
Field events start the Gamecock Opener at 10 a.m. with the women’s weight throw. Track events are set to kick off at 11 a.m. with the men’s 60-meter prelims.

Last Time Out
The Gamecocks took a trip to Clemson for the Orange and Purple Elite and grabbed 11 event victories.

Head coach Curtis Frye said he was impressed with Anthony Greenhow, Jr.’s performances at the Orange and Purple Elite. Greenhow Jr. ran in the 60 meters and took second with a time of 6.82. Greenhow Jr. also ran the 200 meters in a solo heat. He ran a time of 21.18 for the 10th-best performance in school history.

Angel Frank ran a personal best in the 200 meters. She ran a time of 24.37 to win the event. Jackson Marseille won the men’s high jump. He cleared 2.08m/6-9.75 to open his season at the Orange and Purple Elite. EJ Richardson, Jack Mensch, Christian Lewis, Carson Lenser, Pearl Nagbe, Shaianne Sipsey and the women’s 4X400-meter relay team also earned event victories at the Orange and Purple Elite.

Head Coach Frye on the Meet
On his thoughts heading into the Gamecock Opener
“I’m always excited to compete at home and host a meet. There’s no place like home. To have one of the world’s fastest facilities and get our kids used to it (is great). We like to consider our guests as an extension from their home. Track needs a crowd and needs people that get something out of it. Of all the teams attending this meet, no one is a newcomer. We used to run on a square track around the football practice facility (when it was in that spot). They would come and run on our square track so they could get their meets in. When we look at our history as a whole, those people still support what we do so we can line up and have quality efforts. They come from all over and from Division I, II, III and NAIA with Power Five schools. They know they’re going to get a fair call. I think that’s why we continue to support the sport of track and field in South Carolina and in this region of the country and we have a large home schedule. Then we get some big schools like Ohio State and North Carolina State and other schools who need to get a qualifying mark, but along with that, we don’t shut the door on the people who were there when we were building the blocks. For our kids, we want to be polite hosts, but we also want them to be a force. We should have a lot of performances where our kids get some confidence. There will be a lot of people here that are great competitors and there will be moments where our kids will shine. We’ve got three meets in a row with home meets where we can have our kids be comfortable and also making mechanical changes. That’s an advantage of being at your home track, but you don’t want to be at home too much because then you get too comfortable and there could be fear in being in a hostile environment. If there’s anything you can teach losing, you can teach twice as good winning. Confidence is an incredible stimulus.”

“We are so excited and proud of Anthony,” Frye said. “Anytime you can get national attention for any of our athletes is great. It’s a good start for him. For him as a freshman to run his first college 200-meter race and run a personal best means something is going right.”

Greenhow, Jr. ran two impressive races on Saturday at the Orange and Purple Elite on the campus of Clemson. The Powhatan, Virginia, native finished as the runner-up in the 60 meters, clocking in with a time of 6.82 seconds. The freshman followed up that performance with a time of 21.18 seconds in the 200 meters. That time puts him at No. 10 on the Gamecock all-time indoor performance list in the 200 meters.

Home Sweet Home
The Gamecocks open their indoor home slate on Saturday with the Gamecock Opener.

The kick off of the Carolina home schedule is the first of seven meets in Columbia for the Gamecocks, including four inside of the Carolina Indoor Track and Field Complex.

The Gamecocks have three home meets in a row and four within six weeks of each other in the indoor season.

When the action moves outdoors, the Gamecocks have three meets within five weeks of each other.

Gamecocks On the National Stage
Through two weekends of competition, South Carolina athletes own eight top-10 marks in the country and added two top-10 marks at the Orange and Purple Elite.

Anthony Greenhow, Jr. ran the third-fastest time in the country in the 200 meters. The true freshman won USTFCCCA National Athlete of the Week honors for his weekend which included the nation’s third-best 200-meter time, running a time of 21.18.

Angel Frank ran the eighth-best women’s 200-meter time in the country when she ran a time of 24.37 at Clemson on Saturday. Frank’s time also set a new personal best.