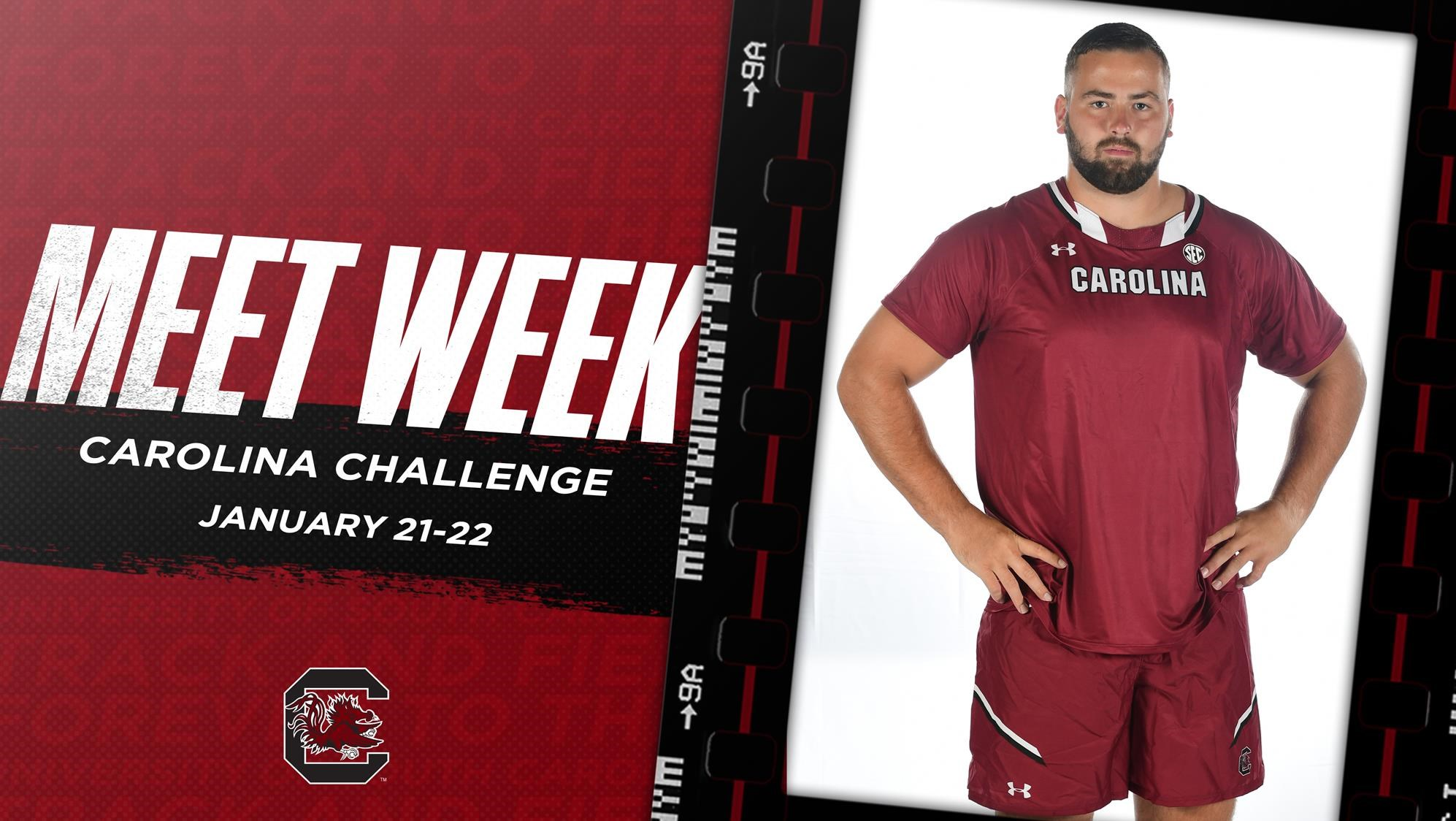 COLUMBIA — The South Carolina track and field teams take to their home track for the second week of a three-week homestand. The Carolina Challenge features two days of action, marking the first multi-day meet of the season for the Gamecocks. South Carolina is coming off the Gamecock Opener, which saw 13 event victories and four top-10 NCAA marks. Anthony Greenhow, Jr., Evan Miller, Stephanie Davis and the women’s 4X400-meter relay team have top-10 NCAA marks.

Spectators are allowed at the Carolina Indoor Track and Field Complex. Admission is free to Friday’s portion of the meet. Tickets for Saturday are $10 for adults, $5 for kids 17 and under and children 2 and under are free. Tickets are cash only and seating is limited. Masking will be required and will be restricted to non-team areas.

Live results can be found here. Fans who can’t make it to the Carolina Indoor Track and Field Complex can follow along with updates on Twitter @GamecockTrack. A full recap will be posted on Twitter, Facebook and GamecocksOnline.com.

Meet Schedule
Friday’s action is set to begin at 10 a.m. with five different field events. Track events on Friday are slated for a 10 a.m. start with the men’s 5,000 meters.

Saturday’s schedule has been condensed to avoid inclement weather and the road conditions that might occur with the weather. Saturday’s action is slated to kick off at Noon.

Stephanie Davis ran the No. 2 time in the NCAA in the 400 meters. She ran alongside three former Gamecocks who all have competed at the Olympics (Wadeline Johnathas, Natasha Hastings and Aaliyah Abrams) and finished third among the group with a time of 52.69.

Anthony Greenhow, Jr. ran under 21 seconds in the 200 meters in just his second ever collegiate 200-meter race. He ran a time of 20.89 in the event to capture a win and the No. 3 time in the NCAA this season.

Coach Frye on the Meet
On his thoughts heading into the Carolina Challenge
“We’ve got another step, another test. Our athletes get to see some other competition with some great teams from around the country coming in. University of Miami, Ohio State and East Carolina are all teams we’re excited to have. Some other teams are having COVID issues, so that’s disappointing, but we’ve been through that ourselves. That may hold us back a little, but performance-wise, teams that came had great performances. We had 20 teams here instead of 25. COVID is having a bearing on track and field just like it is with football and basketball. Our kids are paying closer attention. Our University is paying attention and having our kids be more careful on campus. In athletics, our trainers are doing an outstanding job. Earlier in the week, our kids went out to volunteer in the community for Martin Luther King Day. What have you done lately? Not what you’re talking about, but what have you done lately to make an impact on society? I’m proud of our kids academically and athletically. Stephanie Davis and Anthony Greenhow, Jr. had great performances last week. We look forward to equal competition this week.”

On Stephanie Davis’ 400-meter performance at the Gamecock Opener
“That was a confidence booster for her. She ran with three Olympians (Wadeline Johnathas, Natasha Hastings and Aaliyah Abrams) and two Gold medalists (Johnathas and Hastings) and Stephanie had been at the Olympic Trials. She trains with those three often. She is blossoming into the young lady I thought she could be when she originally came to school here. Right now, she’s No. 2 in the country (in the 400 meters).”

Gamecocks On the National Stage
Through three weekends of competition, South Carolina athletes own eight top-10 marks in the country and added four top-10 marks at the Gamecock Opener last weekend.

Evan Miller also ran an impressive 200-meter time of 21.05 to put himself at No. 10 in the NCAA in the event. South Carolina is one of three teams to have multiple top-10 men’s 200-meter times.

Stephanie Davis ran the No. 2 time in NCAA in the women’s 400 meters. She ran a time of 52.69 and finished as the top collegian at the Gamecock Opener. Davis ran alongside Olympic Gold medalists Wadeline Johnathas and Natasha Hastings  as well as Tokyo Olympian Aaliyah Abrams. Davis took third in her heat filled with Olympic talent.

Freshmen Making Waves
The Gamecocks are seeing big contributions from their freshmen class early in the 2022 season.

Anthony Greenhow, Jr. was recognized as USTFCCCA National Athlete of the Week on Jan. 11 for his performances at the Orange and Purple Elite on Jan. 8. The Powhatan, Virginia, native followed up his national attention by running the third-fastest time in the NCAA in the 200 meters. He won the Gamecock Opener’s 200 meters with a time of 20.89.

Jayla Jamison is another impact freshman for the Gamecocks. She opened the season with a blazing fast time of 7.30 in the 60 meters at the Clemson Opener on Dec. 3. That time still holds at No. 10 in the NCAA this season and moved her into No. 7 all-time in school history in her collegiate debut.

The Gamecocks freshmen class has made an impact through three weekends of competition and figure to play into Carolina’s success later in the year as well.

Home Sweet Home
The Gamecocks have their second consecutive home competition of the season and have seven home meets slated for 2022.