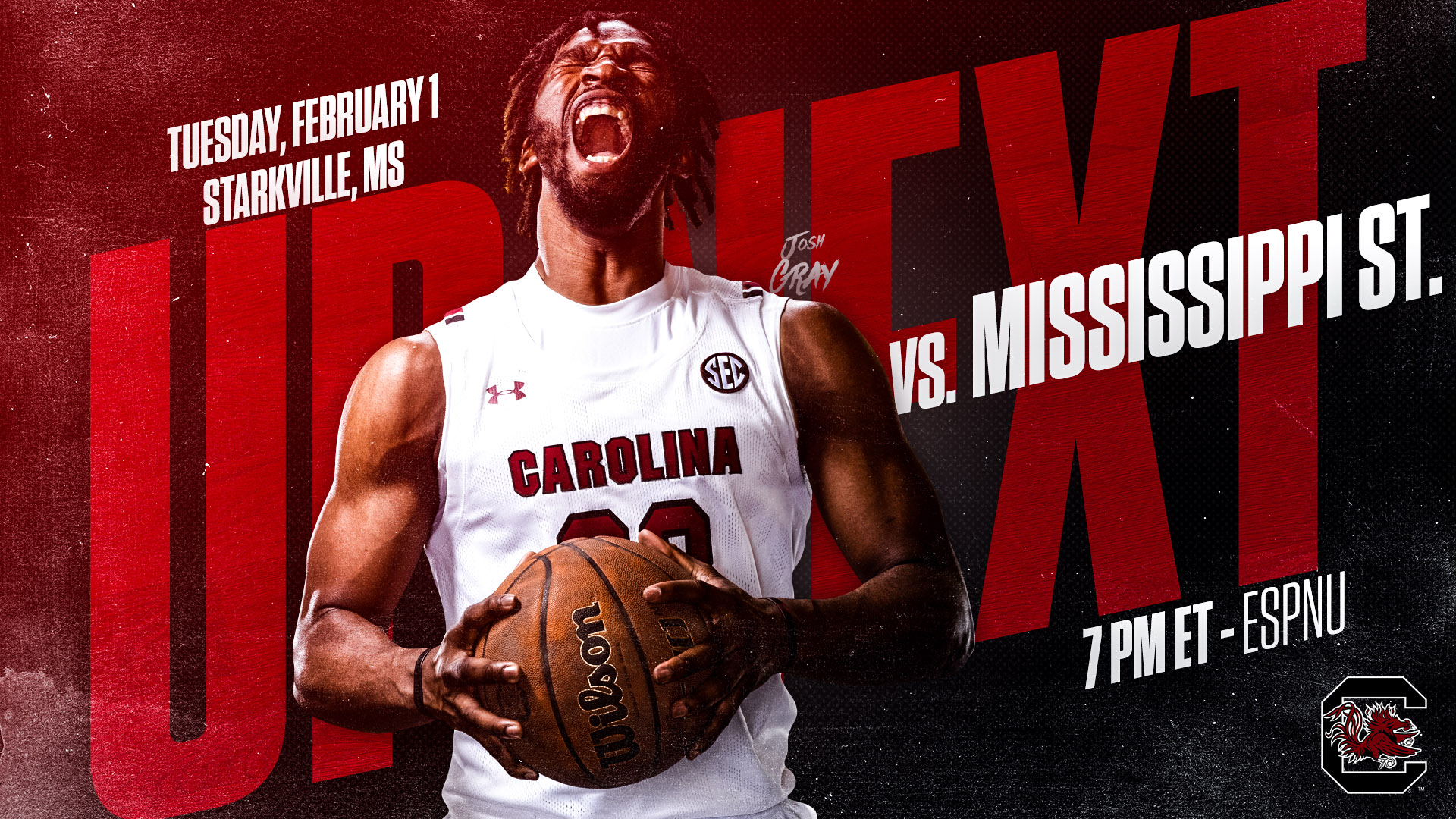 STARKVILLE, Miss. — South Carolina (13-7, 4-4 SEC) is moving on to the second leg of its two-game road trip with a matchup at Mississippi State (13-7, 4-3 SEC) on Tuesday night at 7 p.m. (ET). The Gamecocks have a three-game win streak in tow heading into the matchup at Humphrey Coliseum.

Kevin Fitzgerald (pxp) and Jimmy Dykes (analyst) are on the call remotely for the ESPNU broadcast.

Carolina stayed over in College Station for two days before traveling to Starkville today. The team will have logged 1,845 air miles over the five-day trek in league action.

SCOUTING MISSISSIPPI STATE
> MSU is fresh off two tough back-to-back games last week with trips to No. 5/7 Kentucky and No. 14/14 Texas Tech on Saturday in the SEC/Big 12 Challenge.
> The Bulldogs have one of the best rebounding margins in the country at +7.5, which is second in the SEC and 18th nationally.
> They’re 41st nationally in both steals (170) and steals per game (8.5).
> Iverson Molinar leads the team in 11 different offensive categories and his 18.1 points per game are third in the SEC (66th nationally). He’s shooting nearly 50 perecent from the floor. His 4.2 assists per game are eighth in the SEC and his 2.1 assists to turnover ratio is fourth in the league (77th nationally). Molinar ranks second in the SEC in free throws made (55) and free throw percentage (87.0).

THREE GOING FOR FOUR
> The Gamecocks have won three-straight in league play for the first time since the 2019-20 season ; Carolina did it twice that year winning six-of-seven games from Jan. 25-Feb. 15 ; the Gamecocks have not won four-straight in SEC play since starting 5-0 during the historic 2016-17 Final Four season

FIVE-STRAIGHT OVER VANDY AT COLONIAL LIFE
> The Gamecocks notched the team’s fifth-straight win at Colonial Life Arena (dating back to 2014) over Vanderbilt, 70-61, on Jan. 26), James Reese V led the team with 19 points after going 3-of-6 from long range, his eighth game of the season with three or more makes from downtown ; Jermaine Couisnard (14) and Erik Stevenson (13) joined Reese in double figures ; Couisnard scored 12 of his 14 points in the second half off the bench ; as a team, the Gamecocks had just two turnovers and pulled down 14 offensive rebounds in the second half

SECOND HALF TRIO
> South Carolina was dominant in the second half en route to a 83-66 comeback victory over Georgia (Jan. 22) ; Erik Stevenson (20), Keyshawn Bryant (19) and Jermaine Couisnard (15) scored in double figures and combined for 39 of the team’s 47 second half points ; the trio scored all the points during the team’s 24-0 run as well ; it was the team’s 11th-straight victory over Georgia dating back to 2017, the longest win streak in the series all-time

SEC GAUNTLET
> The Gamecocks lost their third-straight in league play at Bud Walton Arena, falling 75-59 to Arkansas on Jan. 18 ; Carolina led 40-33 at the half but was outscored 42-19 the final 20 minutes ; the team shot 33.9 percent marking the third-straight contest shooting below 35 percent ; true freshman Devin Carter was a bright spot with 20 points in his first career start
> Carolina fell at home in the team’s last game at CLA, 71-63, to Florida (Jan. 15) ; the Gamecocks had another tough day shooting the ball, finishing the game 26-of-75 (34.7 percent) ; Carolina had just nine turnovers (season low against NCAA D1 competition) and pulled down 21 offensive rebounds in the game (season high against NCAA D1 competition)
> The Gamecocks had a tough second half on the road at No. 22/23 Tennessee on Tuesday (Jan. 11), falling 66-46 after trailing by only six at halftime ; outside of James Reese V (15 points, 6-of-11 FG), Carolina struggled shooting the ball (17-for-49, 34.7 percent) ; the team also was plagued by 23 turnovers

GRITTY IN THE MUSIC CITY
> South Carolina bounced back with a big road win, 72-70 at Vanderbilt (Jan. 8) ; it was a balanced effort for the Gamecocks as all 11 players who saw action in the game scored and had a rebound ; the team shot 54.9 percent (28-for-51), the highest percentage under head coach Frank Martin on the road in league play (second highest in SEC play under Martin only trailing 57.7% vs. Arkansas on 1/26/13) ; Carolina improved to 4-0 when shooting 50 percent or higher this season with the win ; James Reese V limited the SEC’s leading scorer, Scotty Pippen Jr., to just 4-of-11 shooting while forcing seven turnovers

LEAGUE PLAY BEGINS
> The Gamecocks fell at home, 81-66, to No. 9 Auburn in the team’s first league game earlier this week (Jan. 4) ; Carolina trailed by as many as 21 and rallied late to pull within eight but fell short ; Erik Stevenson matched his season high with 25 points ; he was 5-for-8 from downtown while also pulling down five rebounds and leading the team with four assists

CASH MONEY CARTERS
> South Carolina bounced back with a 105-75 win over Army on Dec. 22 ; the team eclipsed the century mark for the second time this season (first time to score 100+ on multiple occasions since 1995-96) ; the Carters (Devin and Chico) combined for 42 points as the team shot 58.6 percent from the floor (41-of-70) ; the team’s 61 points in the first half marked the team’s first time scoring 60+ in a half since tallying 65 in the Second Round of the 2017 NCAA Tournament vs. Duke in Greenville, S.C.

SHORTHANDED IN THE UPSTATE
> The Gamecocks fell on the road at in-state rival Clemson, 70-56, on Dec. 18 ; Carolina limited the Tigers to just 33.3 percent shooting, but also struggled offensively with a 32.7 percent shooting clip (second lowest of season) and a season-low four assists ; Chico Carter Jr. led the team with a season-high 21 points (2-for-4 3FGs, 9-for-10 FTs) ; the Gamecocks were shorthanded missing several key players in COVID protocols

YOU GET A BUCKET, YOU GET A BUCKET AND YOU GET A BUCKET…
> South Carolina scored the most points in the Frank Martin era and its most points in a game since 1995  (won 112-61 vs. The Citadel on 12/21/95) in a 110-51 victory vs. Allen (Dec. 14) ; the 15 players suited up for Carolina each scored in the game ; Brandon Martin had his first career double-double with 10 points and 11 rebounds – he also had a career-high five assists ; the Gamecocks dished out 31 assists total, the second best mark in program history (school record is 33 in win over Georgia Southern in 1976)

40-MINUTE FIGHT
> Rookie guard Devin Carter had 16 points and he pulled down a team-best seven rebounds, while James Reese V scored 13 – all in the second half – as South Carolina overcame a 16-point first-half deficit to post a 66-65 win over Florida State on Dec. 12 at the No Room For Racism Classic in Rock Hill ; Reese turned the tides in the game with a 10-0 run all by himself ; following his standout performance in the win over the Seminoles, Devin Carter earned his first-career SEC Freshman of the Week award on Monday, Dec. 13

WIRE-2-WIRE
> Carolina posted a convincing 80-67 win over Georgetown at Colonial Life Arena Dec. 5 in non-conference action ; the Hoyas never led in the contest, and the Gamecock defense held Georgetown to just 32.9 percent (23-70) from the floor

AN OFF NIGHT IN CONWAY
> The Gamecocks fell 80-56 in their first true road contest of the season at Coastal Carolina on Dec. 1 ; CCU led for the majority of the first half, before the Gamecocks pulled to within one at halftime, however, the Chanticleers out-scored Carolina 44-21 in the second half to capture the non-conference win

FOUR-STRAIGHT IN NON-CON
> The Gamecocks trailed for the majority of their contest with Rider at Colonial Life Arena on Nov. 28, but a 3-pointer from senior forward Keyshawn Bryant tied the contest at 36-all with 12:30 to go, and Carolina was able to maintain its lead the remainder of the game to close the 65-58 non-conference win for it’s fourth-straight
> Erik Stevenson hit five 3s to lead Carolina to an 85-74 victory at home over Wofford (Nov. 23)
> Rookie guard Devin Carter was clutch at the free throw line, hitting all four of his attempts in the final five seconds of play to clinch a 66-63 Gamecock win over UAB Nov. 18 at CLA ; the Blazers, who are the preseason pick to win C-USA this season, battled back from a 16-point deficit to make it a one-point game with a minute remaining in the matchup
> Following its first loss of the season, Carolina rebounded with a 75-64 victory over Western Kentucky on Nov. 14 in its final contest at the inaugural Asheville Championship ; Jermaine Couisnard and Devin Carter led Carolina with 16 points each, and James Reese V tallied a season high 14 points behind four 3s

THEY WERE HOT… WE WERE NOT…
> The Gamecocks suffered their first loss of the season on Nov. 12, falling 66-62 to Princeton in a neutral site matchup at the Asheville Championship; Carolina struggled from the field, hitting just 36.2 percent overall, and just 15.4 percent (4-26) from 3-point range ; Princeton made 11 3-pointers in the win ; Wildens Leveque posted his first career double-double in the game with 12 points and 10 rebounds on 6-of-6 shooting

THAT WINNING FEELING
> The Gamecocks improved to 84-30 all-time in season openers with a 78-60 victory over USC Upstate on Nov. 9 at Colonial Life Arena ; Jermaine Couisnard and Wildens Leveque led the Gamecocks with 14 points each, while Couisnard dished out a game high seven assists in the win

UP NEXT
> South Carolina returns to Columbia for another two-game homestand starting with No. 18/20 Tennessee (14-6. 5-3 SEC) on Saturday (Feb. 5). Tipoff is set for 1 p.m. (ET) on CBS with Kevin Harlan (pxp) and Jim Spanarkel (analyst) on the call for the nationanly televised SEC showdown.