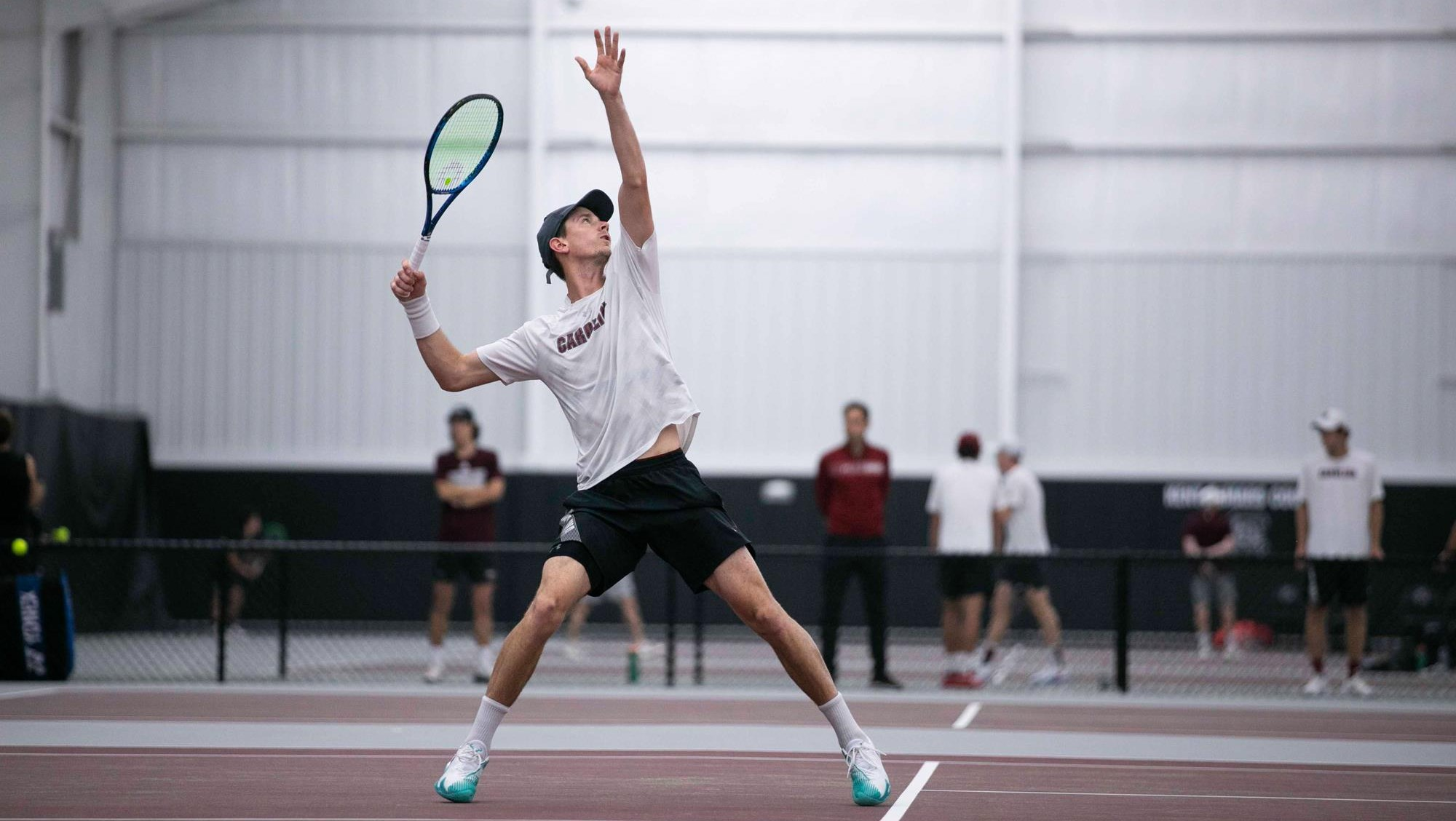 Columbia, S.C. – No. 7 South Carolina men’s tennis took down the No. 28 ranked Mississippi State Bulldogs on Friday night 5-2 at Carolina Indoor Tennis Center. The Gamecocks won the doubles point and four of six singles matches to secure the victory.

“That was a hard-fought win,” said head coach Josh Goffi. “Mississippi State, they always fight and you can guarantee that. They caught us on our heels. We lost five first sets, and it looked like we were either going to have a long day or they were going to get us off the courts pretty quickly. I’m proud of my guys. They stuck around and put up a good fight. We do need to come out a little bit better in order to be successful the rest of the year; it’s going to catch up with us. It’s important for us to get a good start in doubles and singles, but you can always count on us to hang around, and it turned out in our favor today.”

James Story and Raphael Lambling were dominant in doubles for the Gamecocks. The duo dropped the first game of its match but responded with five straight to go up 5-1. They allowed their opponent only one more game before clearing their court first with a 6-2 win.

At the top of the lineup, No. 30 pair Connor Thomson and Daniel Rodrigues were in an even match with Florian Broska and Gregor Ramskogler. The Gamecocks served first and the two teams locked into a steady battle with no breaks throughout. It wasn’t until the last game that the Gamecocks pulled away with a break to take the match 7-5, clinching the doubles point.

Early singles play favored the Bulldogs with Mississippi State taking five first sets. Junior Jake Beasley was the only Gamecock to win his first set with a dominant 6-2 performance. Beasley trailed early in the second set, falling behind 2-3 before putting up two straight games to flip the set back in his favor 4-3. Davide Tortora of Mississippi State evened the set at four-all but Beasley took two more games wins to earn the straight-sets victory.

The next point went to the Bulldogs with Alberto Colas taking a straight-sets win on Court 5. Lambling answered back with a point for the Gamecocks on Court 4. The junior dropped his first set 6-2 but fought back for the win. He went back and fourth in the second set, exchanging leads with Mississippi State’s Ramskogler. After tying the match at four all, Lambling put up back-to-back wins to take the second set 6-4 and even the match. Lambling ran away with the third set, jumping out to a 3-0 lead before allowing Ramskogler a game. The Bulldog put two games wins on the board, but Lambling pulled out another three-game run to take the final set 6-2.

Rodrigues clinched the match for the Gamecocks, earning his win over No. 25 Broska at the top of the lineup. Broska took the first set 6-4 but Rodrigues evened the match, winning the second set 6-3. Rodrigues was dominant through the final set, winning it 6-2 to secure South Carolina’s win. This win marked Rodrigues’ fourth-straight win over a top-35 opponent and made him 13-2 from the No. 1 singles position.

Matches played out where the Gamecocks picked up another win on Court 3. Thomson completed another comeback win after Carles Hernandez took the first set 6-3. Thomson evened the match with a 6-3 win of his own in the second set. The third set was even to start, tied at two all early. Thomson pulled away with two games to go up 4-2. Hernandez answered with a game of his own but Thomson responded immediately, increasing his lead to 5-3. Hernandez grabbed one more game before Thomson put the match away with a 6-4 final set.

Friday’s win marked South Carolina’s first win over Mississippi State since April 16, 2017. The Bulldogs were on a five-match win streak over the Gamecocks prior to this season’s competition.

South Carolina will continue its SEC slate at home on Sunday, hosting the No. 31 Ole Miss Rebels at noon. Admission to the match is free and open to the public. Live stats and streaming are available at GamecocksOnline.com