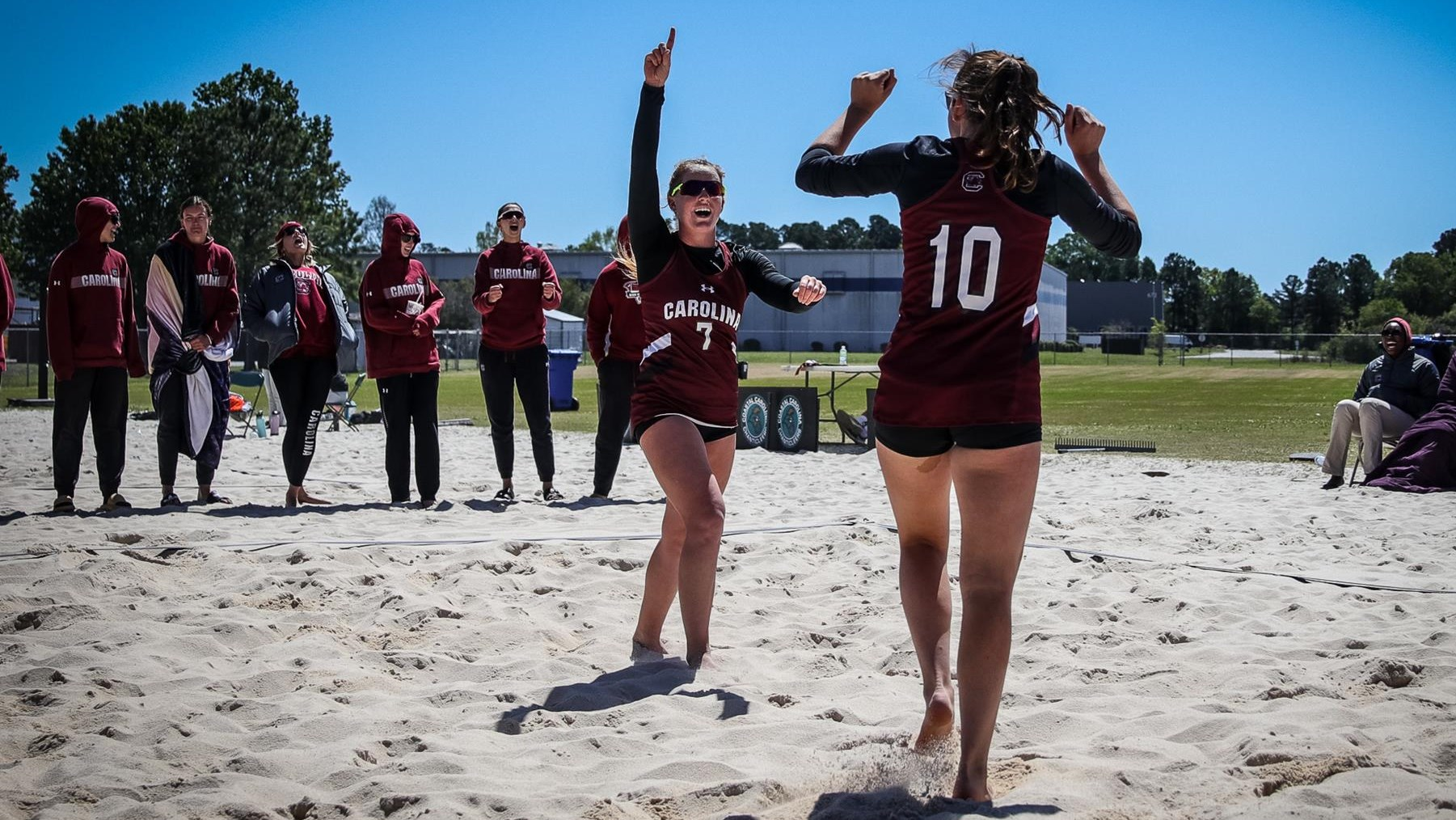 CONWAY, S.C. – South Carolina beach volleyball wrapped up its first undefeated weekend of the season on Saturday, taking down College of Charleston and UNCW to finish play at Coastal Carolina with a 4-0 mark. That improves the Gamecocks’ season record to 17-8 and extends a six-game win streak.

One day after sitting starter Whitley Ballard with an injury, the Gamecocks were handed another blow as Skylar Allen was forced out of the lineup during warmups due to injury concerns. With such a late development, the team pressed freshman Chase Teal into her first collegiate start to take Allen’s place at the very top of the lineup.

The team jumped out to a quick lead against the Cougars, with sweeps on courts four and five for a 2-0 lead. Charleston fought back with first-set wins on courts one and two and led late in a second set at court three trying to force a third. Abby Carroll and Lauren Wilcock fended off that comeback attempt and clinched the team dual with a 21-12, 22-20 decision. South Carolina came back to win both first and second pair in three sets to wrap up the 5-0 sweep, highlighted by Teal and Jordan Smith winning their court one match 12-21, 21-18, 15-10.

The team’s win over Charleston was a milestone, marking the 150th victory in the program’s nine-year history, all coming under head coach Moritz Moritz.

In the weekend finale against UNCW, the two teams split the first wave of action, with the Seahawks winning in straight sets on court four but the Gamecocks countering with a strong showing from Jillian Gleason and Hailey Cabeceiras on court five (21-15, 21-19). South Carolina moved quickly to wrap up the team victory, getting sweeps from Carroll and Wilcock on court three and Teal and Smith running it back for another win together on court one. Kaeli Crews and Hannah Mackenhausen put a bow on the weekend with a three-set victory on court two (21-19, 21-23, 15-8).

QUOTABLE
Head Coach Moritz Moritz on dealing with adversity all weekend
The story of this weekend is overcoming changes in the lineup and adapting to the environment. With the wind, we’ve had it on numerous times this season so far, and we’ve also had to deal with lineup changes already. So, at this point it’s almost par for the course but it’s still an accomplishment and a testament to the team. It’s something that we need to continue to build on, hopefully we can take this next week to get healthy and then make that final push in the last couple of weeks of season.

UP NEXT
The Gamecocks are back home for their final tournament of the regular season, the Palmetto Invitational, April 15-16. It will be a weekend of rematches as the team welcomes in four opponents faced already this season; South Carolina faces College of Charleston and Coastal Carolina on Friday, then FGCU and Georgia State on Saturday. Game times will be slightly different than normal, the team plays Coastal Carolina at 5:30 instead of 5:00 on Friday and wraps up the weekend at 3:00 on Saturday vs. Georgia State instead of 5:00. The 5:30 Friday dual against Coastal Carolina will also be senior night for the team’s seniors and graduate students.