A three-time Lisa Leslie Award winner, the Gamecocks’ leading scorer (16.8 ppg) led the nation with 30 double-doubles this season, including an SEC-record 27 straight to become just the third player in NCAA Div. I women’s basketball history with a streak at least that long.

In the Gamecocks’ 14 games against ranked opponents, including seven against top-10 foes, Boston poured in 18.1 points per game and grabbed 13.9 rebounds per outing. In just her second NCAA Tournament, she was named Most Outstanding Player at both the Greensboro Regional and the Final Four after averaging 16.8 points and 15.2 rebounds in the tournament, during which she also led the team in assists. 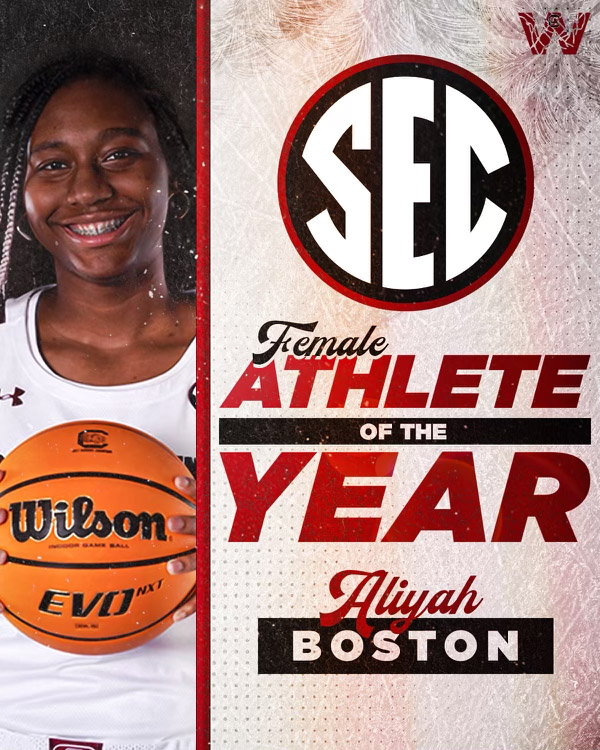 The 2021-22 Roy F. Kramer SEC Male Athlete of the Year was Bryce Young of Alabama, who won the Heisman Trophy among other national player of the year honors.

The SEC Athletes of the Year Awards were first presented in 1976 for men and 1984 for women. The award was renamed the Roy F. Kramer Athletes of the Year in 2004 to honor the former Commissioner who served the conference from 1990-2002. In addition to South Carolina’s now three winners from women’s basketball, Kip Bouknight (2000, baseball) and Trinity Johnson (1997, softball) have also claimed the award for the Gamecocks.

Continue to check GamecocksOnline.com and the team’s social media accounts (@GamecockWBB) for the most up-to-date information on the women’s basketball program.