COLUMBIA, S.C. – The South Carolina women’s soccer team announced its complete 2022 schedule on Monday (July 11) with the release of its nine-match road schedule. The team had previously announced its home schedule. 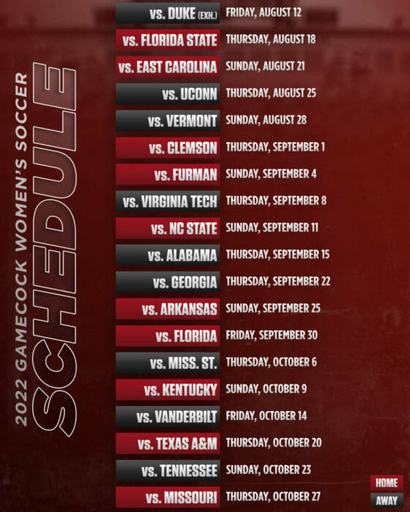 South Carolina’s lone exhibition match of the season takes place on the road August 12, when they travel to Durham to take on a Duke squad that also advanced to the quarterfinals of the NCAA Tournament.

After opening the regular season at home, Carolina travels to the Northeast for a pair of matches. They take on UConn Aug. 25, before head coach Shelley Smith and the Gamecocks faceoff against Smith’s alma mater, Vermont, on Aug. 28.

Following a pair of home matches, South Carolina travels to Virginia Tech September 8 for a rematch with the Hokies, who advanced to the second round of the NCAA Tournament last season.

The Gamecocks open SEC play when they travel to Alabama on Sept. 15 before heading to Georgia on the 22nd.

Carolina heads back out on the road for a quick trip to Mississippi State October 6. The final two road matches of the season are sandwiched between home games, as the Gamecocks travel to Vanderbilt Oct. 14, and then wrap up the road schedule Oct. 23 at Tennessee.