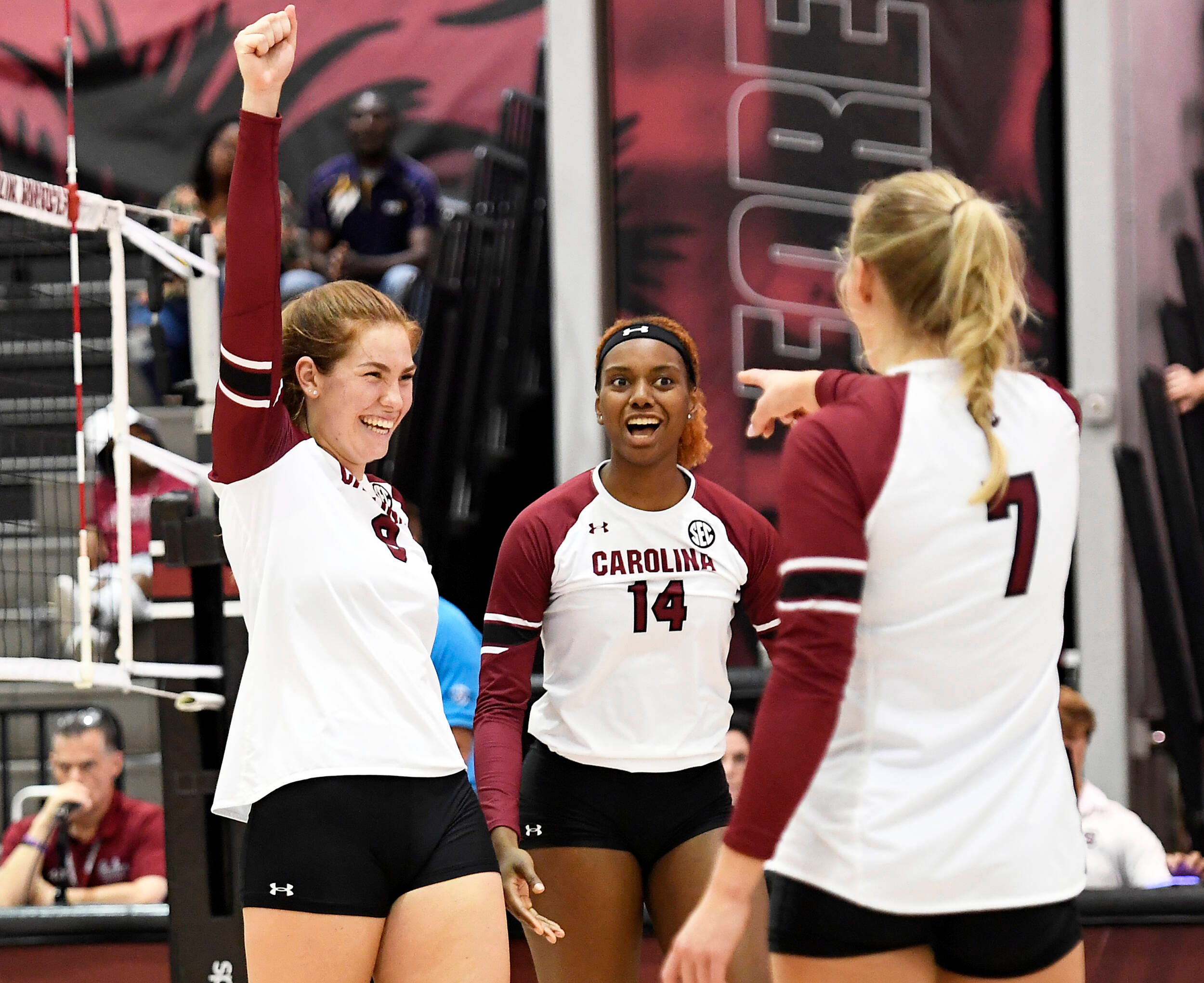 COLUMBIA, S.C. – A big presence at the net defensively sparked the Gamecocks to a 3-0 sweep of Cincinnati (1-6) Friday evening. The victory snapped a three-game losing skid for South Carolina (4-3). Ellie Ruprich led the team with nine blocks and added six kills, Riley Whitesides (14) and McKenzie Moorman (11) paced the offense with double-digit kills and the offense as a unit out-hit the Bearcats .314 to .162.

1st SET: The blocking effort was evident straight away, with the Gamecocks totaling six in the opening set, a 25-19 victory. Three of the team’s first seven points came off blocks and South Carolina built an early 12-7 lead. Cincinnati was able to pare the lead down to one, 16-15, but the Gamecocks pulled away with five of the next seven points and did not look back. Seven different members of the team recorded a kill, led by three apiece from Moorman and Ruprich.

2nd SET:  The team grinded out the wildest set of the season to date in the second, with 21 ties and eight lead changes ending with a 34-32 victory for South Carolina to go up 2-0. Strong runs behind the service line by Dalaney Hans and then Ruprich turned a 11-10 Cincinnati lead into a 17-13 Gamecock advantage, but the visitors weren’t going to go quietly.

The Bearcats tied the score back up at 22-all and then 23-all and following a lost replay challenge from South Carolina it was facing a set point opportunity from Cincinnati. Riley Whitesides was pivotal in the extended segment of the set; the junior recorded four of her 10 total kills in the set after Cincinnati’s first set point. Her first kill tied the set at 24, from there the Gamecocks had three set point chances denied and Cincinnati also had three. Oby Anadi was the difference-maker late, after a Whitesides kill made it 32-32, Anadi recorded back-to-back blocks to seal the win and a 2-0 match advantage.

3rd SET: The momentum was clearly defined by the second set, South Carolina made sure it did not slip away thanks to another strong start to the third. Another service run by Hans built a 7-2 lead, then she enjoyed another long stay serving in a 6-0 run to push the advantage out to 19-9. The Gamecocks were able to work in some key reserves late, getting an ace from Morgan Carter and a kill from Janna Schlageter. Fittingly, it was a solo block from Anadi – the sophomore’s third of the match – that ended the match with a 25-17 final margin.

QUOTABLE
Head Coach Tom Mendoza on the defensive performance from middle blockers Ellie Ruprich and Oby Anadi
“I thought we did a good job of balancing trying to make adjustments versus going and being aggressive, getting our hands across the net and trying to be as impactful of a block as possible. We came up with six blocks in the first set, we didn’t have any in the second set until the two last point which obviously we were really excited about those last two but you see how big of a difference our block can make in a set.”

UP NEXT
The two sides meet again in less than 24 hours, with a first serve Saturday at 1 p.m. for the rematch. The game will again air on the SEC Network+.