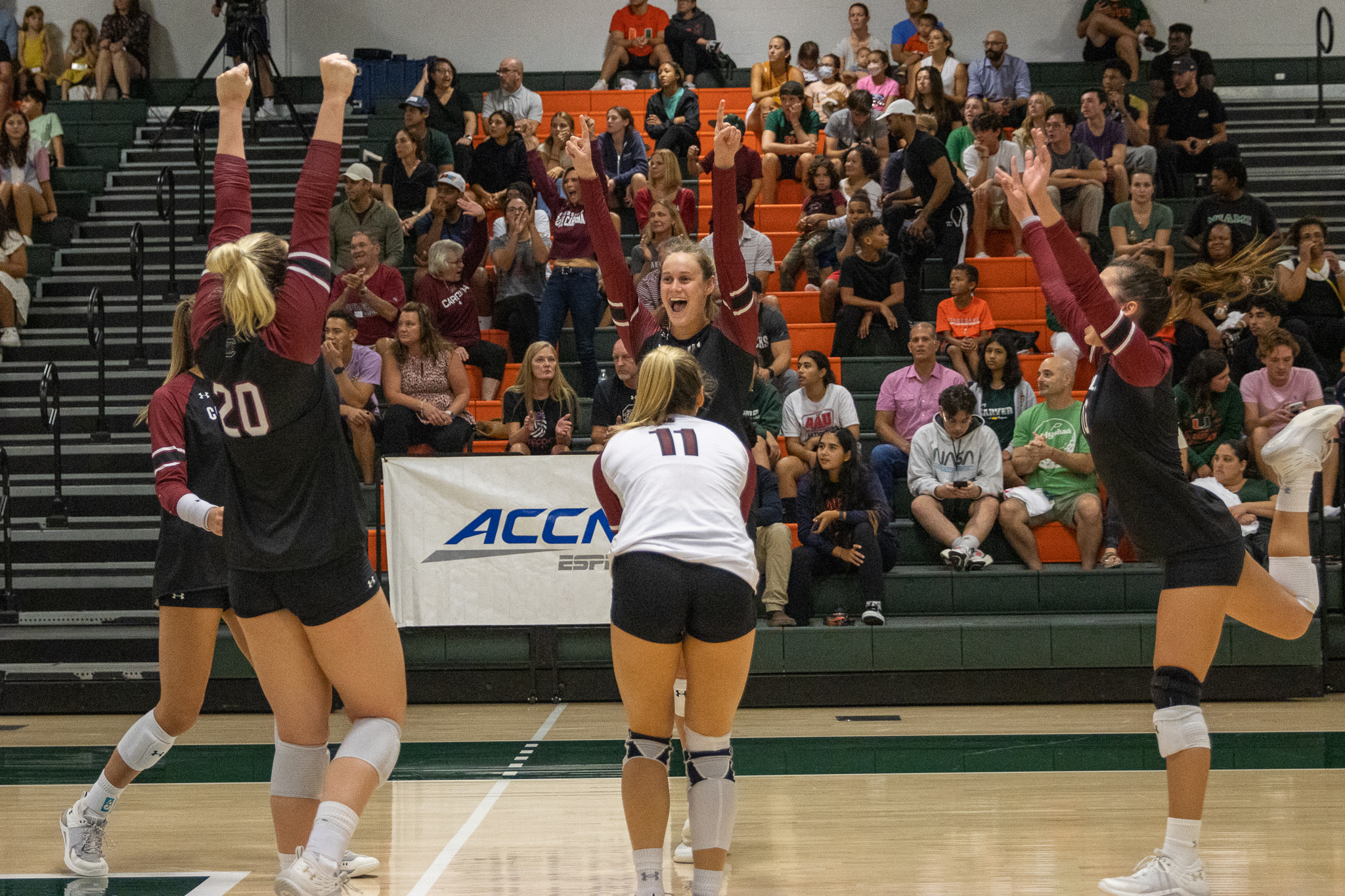 CORAL GABLES, FLA. – South Carolina volleyball earned its first road win of the season in dramatic fashion Friday night, holding off a Miami comeback to defeat the Hurricanes in five sets. The Gamecocks (6-3) spoiled the home opener for the Hurricanes (7-3) in the first meeting between the two schools since 1981. McKenzie Moorman led the team with 17 kills while also hitting .324.

1st SET: Miami used a spate of errors by South Carolina to build a big 9-2 lead out the gate, but the Gamecocks fought through it and alleviated some early nerves with a 6-1 run to get back in contention early. The Hurricanes maintained at least a two-point advantage until a second run mid-way through the set keyed by Camilla Covas.

Trailing 18-15, the Gamecocks used back-to-back aces from Covas in a 4-0 run that gave the team its first lead of the night. Miami got back ahead at 22-21, but a kill from Riley Whitesides and an ace from Claire Wilson flipped the score back in Carolina’s favor. With a 24-23 lead, the Gamecocks won a replay challenge that would have tied the game at 24, but a reversal instead clinched the 25-23 win for the visitors. Whitesides, Lauren McCutcheon and McKenzie Moorman combined for 12 kills and a .454 hitting percentage to lead the offense.

2nd SET:  The Hurricanes got another fast start in the second, going up 10-5 before the Gamecocks again answered the bell. Down 14-12, a pair of kills from Kiune Fletcher highlighted a 5-1 run to push Carolina ahead. A Miami run gave it the lead again, but it would give it back thanks to three unforced errors that made it 21-19 for the Gamecocks. McKenzie Moorman put away back-to-back kills and Ellie Ruprich sealed a 25-22 win with her fourth block of the night.

3rd SET: Another early lead from the home side would finally stick in the third, Miami used an early 6-0 run to take a lead that it would not relinquish in a 25-20 final score. The Hurricanes enjoyed their best game of the match on offense, out-hitting South Carolina .351 to .116 and piling up 17 kills. Moorman added six more kills in the third, but six unforced attacking errors doomed the team’s comeback chances.

4th SET: The defense for Miami put the clamps on the South Carolina offense in the fourth, using four blocks in a game-breaking 11-1 run that turned a 9-8 lead for Miami into a 20-9 margin that would be plenty in a 25-13 final to tie the match. The Gamecocks hit -.077 with six total kills, half of those coming after the Miami run to double its lead, and the Hurricane’s out-blocked Carolina 5-0.

5th SET: Needing to shake off the momentum swing early in the final game to 15, the Gamecocks found themselves trading points early with Miami before a small run gave them some daylight. In a 4-4 game, the team got kills from Whitesides and Fletcher in what became a 4-0 run. The Hurricanes would get no closer than two points the rest of the way in a 15-11 final. One game removed from its worst offensive performance of the night, the Gamecock attack enjoyed it’s best game in the fifth, hitting .471 with 10 kills, led by three apiece by Moorman and McCutcheon.

UP NEXT
The Gamecocks remain for one more match in the Hurricane Invitational, playing a neutral-court match against No. 20 Oregon on Saturday at 3 p.m. The game will not have a live broadcast, follow @GamecockVolley on Twitter for in-game updates.