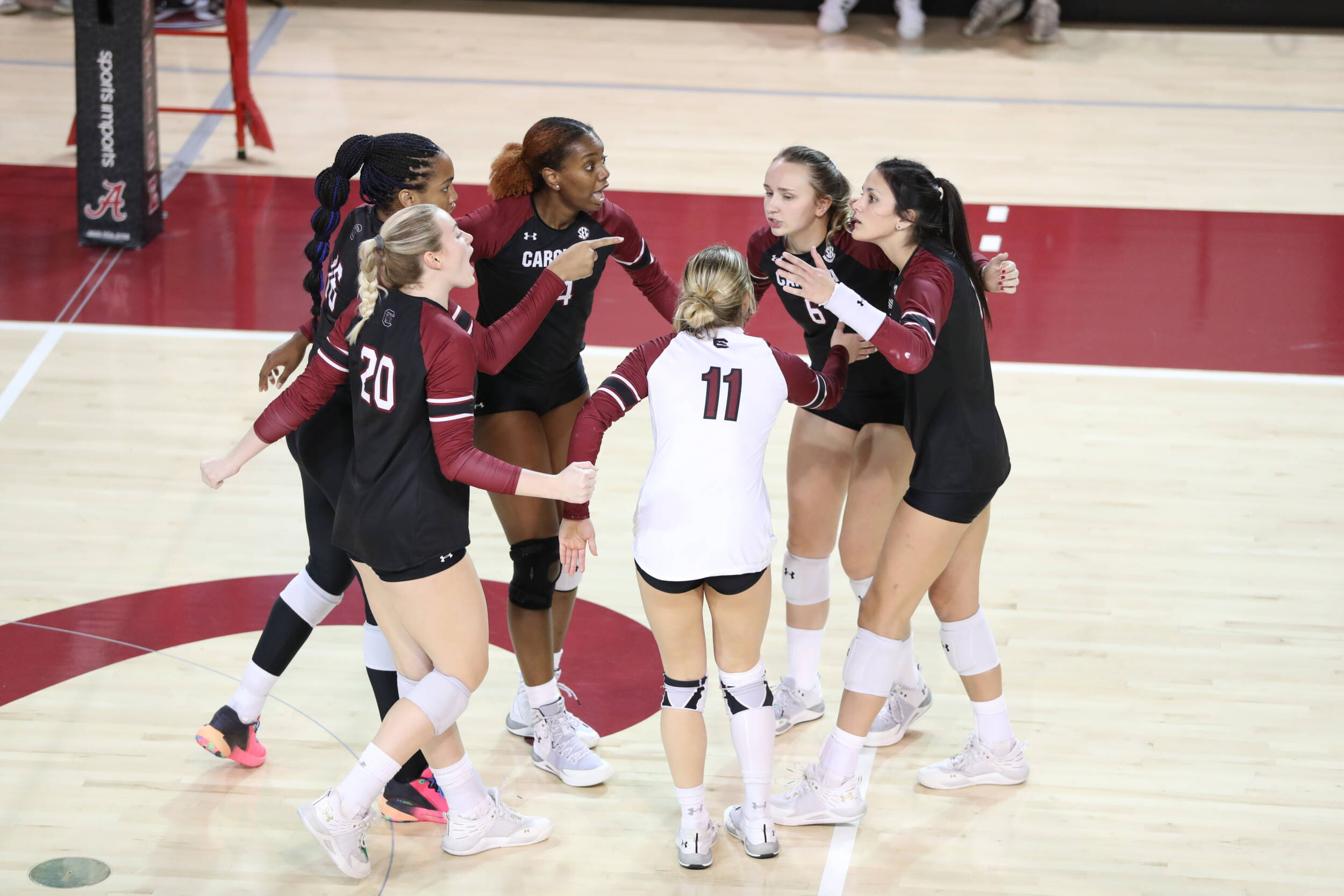 TUSCALOOSA, ALA. – South Carolina picked up a road sweep at Alabama on Friday night, overcoming a big deficit in set one before righting the ship. Lauren McCutcheon and Kiune Fletcher led the offense with 14 and 13 kills, respectively, with both also hitting well north of .350. The Gamecocks move to 12-12 for the season and 6-8 in conference play, Alabama now stands at 8-17, 2-11 SEC.

1st SET: Alabama jumped ahead behind a 7-0 run early that turned a 4-3 advantage into 11-3 before the Gamecocks could side out. The Tide enjoyed a big lead for most of the early going, pushing out to as much as nine points (17-8) before the Gamecocks rallied back. It started with a 5-0 burst with a pair of kills and a block from Ellie Ruprich to make it 18-15, then a 6-0 run thanks to a pair of service aces from Lauren McCutcheon that gave this team its first lead of the night at 21-20.

The Gamecocks had the first set-point opportunity at 24-23, but weren’t able to close out. Alabama nearly recovered for the set win, leading at 28-27, but an attack error followed by back-to-back kills for Kiune Fletcher sealed the 30-28 win. Coming off a career-high 15 kills against Ole Miss last Sunday, Fletcher remained dialed-in and led the team with six kills in the set. Along with her two aces behind the line, McCutcheon also chipped in five kills without an error.

2nd SET: The Crimson Tide again would start strong in the second, taking an early 10-7 lead. The Gamecocks again used the serve game to work their way back in, using a 4-0 run capped by an ace from Riley Whitesides to flip the scoreboard in their favor at 15-13. The Tide were able to tie the score at 15, but never held the lead again in a 25-21 loss. South Carolina pulled away late with three unanswered points to close it out, highlighted by Whitesides’ second ace of the set. McCutcheon added five more kills in the second, she was joined by freshman Alayna Johnson who hit .400 with five kills as well to power the offense.

3rd SET: South Carolina was able to break away mid-way through the third set to run away late with a 25-19 win to clinch the sweep. The team’s traded points early with five ties before either side reached 10 points. The Gamecocks made the decisive move with four unanswered points to turn a 10-8 deficit into a lead they would not relinquish. Capped by a block from Fletcher and Ruprich, the team went on a 7-1 run after trailing 10-8 and Alabama would get no closer than three points the rest of the way. McCutcheon and Fletcher again joined forces to torment the Tide, the duo had four kills apiece and neither committed a single error over 16 combined swings.

QUOTABLE: TOM MENDOZA
On the team’s first-set rally to set the tone for the match
Seeing that poise on the road in a SEC match is a big deal and I think it was something that we learned as that first set went on. To have the team see that, whether they’re veterans or younger players who are going to be big players moving forward, it’s going to be really important and any time you can win on the road in the SEC it’s a big deal.

UP NEXT
The two teams will play again in under 24 hours, with a Saturday rematch scheduled for 3 p.m. ET. The game will again be broadcast on the SEC Network+. Follow @GamecockVolley on Twitter for continued updates on the team.