Equestrian Takes the Reins for a Different Challenge at Fort Jackson

South Carolina equestrian student-athletes dismounted their horses and took the reins for a different challenge as the Gamecocks visited Fort Jackson on Friday. The Gamecocks weren’t dropping into combat but underwent training from U.S. Army soldiers and rappelled down a forty-foot tower. The exercise not only helped them gain self-confidence but also gave them a small taste of what members of our military do daily in training to defend our country.

“One of the things we’re trying to do is improve their confidence,” said head coach Boo Major, who also participated in the activity. “They have improved by leaps and bounds over this past semester, but we wanted to try to encourage them more. It’s also a great team participation sort of thing where everyone is rooting each other on.”

“This is a good test of their personal courage,” said Captain Andrew Willette, the battalion operations officer who was the liaison between the U.S. Army and the Athletics Department. Several Gamecocks teams have been visiting Fort Jackson for different exercises throughout the year. “The biggest thing for me is that I hope they get an understanding and appreciation for everything and anything that someone who raises their right hand to stand up and serve their country goes through. It’s a scary event for a lot of our trainees, but they handle it and push through it. It’s what we expect soldiers to do.”

“When you’re trying to overcome fear, the best thing you can do is force yourself to face it.” 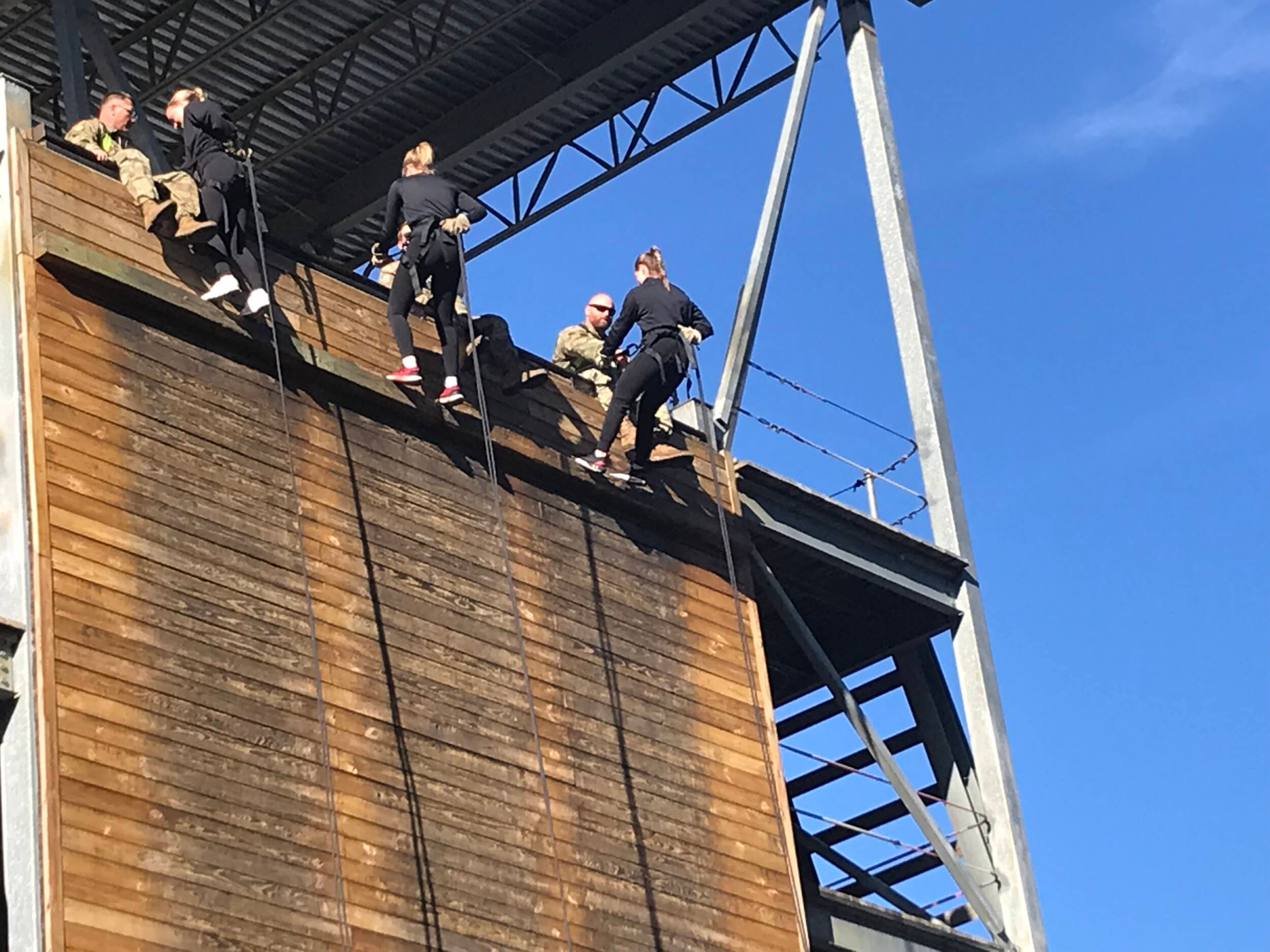 The Gamecocks started with some instruction on how use the rappelling gear, and after a warmup on a smaller incline wall to get comfortable with how everything works, it was off to the big tower. Some were reluctant to crawl over the wall at first, while others were eager to give it a go. Regardless, every member of the team successfully completed the objective.

“I was terrified when I was up there, but it wasn’t actually all that bad once you got down,” said sophomore Ava Pratt. “You actually have more control than you thought you do. Once you get it done, you feel better about it. You have to make yourself do it, even if it’s hard.”

“I thought it was a pretty fun experience,” said junior Sydney DeGrazia. “Once we did the practice wall, I felt a lot better. I’m definitely happy to be back on the ground! I was a little scared at first. When you’re trying to overcome fear, the best thing you can do is force yourself to face it, and it only gets better from there. These (soldiers) are obviously very brave and work hard. I definitely appreciate what they do.”

“I was pretty nervous,” said junior Alexa Aureliano. “I’m not going to lie; I don’t do very well with heights. The soldier at the top, he helped me calm down. I was really nervous. Once he told me to give a little push, I felt pretty confident going down the rest of the way. I learned that things can seem scary at first, but when you try, it’s really not that bad.”