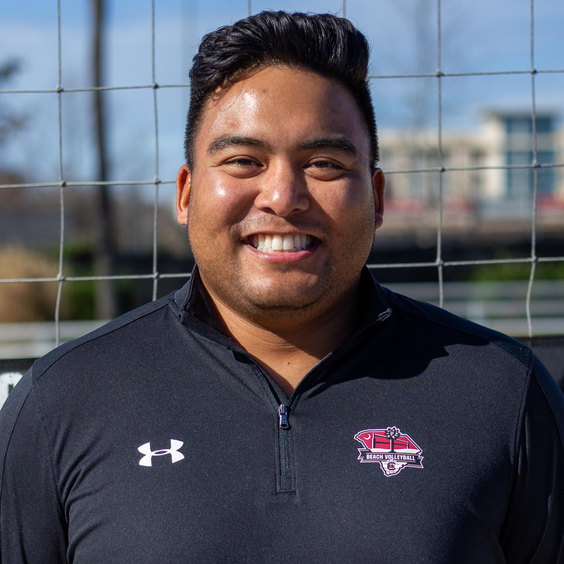 RJ Abella enters his seventh season as assistant coach and recruiting coordinator for the Gamecocks in 2020, working with the program since its inception.

The team reached a program milestone in 2019, cracking 100 career wins on April 6, 2019. The team finished at 20-11, the fourth 20-win season in a row, and recorded historic wins over No. 2 Southern Cal and No. 4 LSU – the first two wins over top-five-ranked opponents in program history. Individually, Lydia Dimke and Katie Smith earned AVCA Top Flight honors, and Cadie Bates and Shannon Williams became the first Gamecock pair to ever earn CCSA All-Conference postseason honors.

The Gamecocks set the program record with 24 wins in 2018, and earned the number six overall seed in the NCAA tournament. Twelve of those victories came against teams ranked in the top-20 during the season, and South Carolina ended the year ranked 9th in the country. Individually, eight Gamecocks won 20 or more matches, three pairs were recognized by the AVCA as Top Flight honorees, and two pairs earned a spot at the USA Volleyball Collegiate Championship.

The program broke on to the national scene in 2017, winning 23 duals and making its first-ever appearance at the NCAA tournament. The Gamecocks won five matches against teams ranked in the AVCA top-15 during the season, and ended the year ranked eighth in the country. All ten starters finished the year with 20 or more individual wins, also shattering the school record. MacieTendrich broke the school record for wins by an individual, after finishing with 27 victories in 2017. Freshmen Ali Denney and Katie Smith made the Coastal Collegiate Sports Association’s all-freshman team for Carolina, and Katie Zimmerman and Julia Mannisto were named the all-academic team in the postseason. After the season ended, two pairs represented South Carolina at the USA Volleyball Collegiate Championship at Hermosa Beach, another program first.

In 2016, the team 20 matches for the first time in the program’s brief history. They also tallied the program’s first-ever win against a top-10-ranked team, after beating No. 10 Florida International at the CCSA tournament. Abella scored a win off the sand in 2016, when he signed AVCA Beach Volleyball Honorable Mention All Americans and AAU champions Carly Schnieder and Katie Smith.

During the 2015 season, Abella helped guide Carolina to a 14-7 record, nearly triple the win total of the program’s inaugural season. Abella’s recruit Julia Mannisto, one of the inaugural four AVCA High School Beach Volleyball All-Americans from 2014, stepped right in to the No. 1 pair role.

Abella and head coach Moritz Moritz have shown the ability to not only recruit and train high-level high school athletes, but also cross-train indoor collegiate athletes who look to pursue a post-graduate career on the sand. In the program’s first six years, the team has trained six indoor athletes who have combined to go 190-90 (.678) as individuals, highlighted by Adrianna Culbert (Colorado St.), Katie Zimmerman (Wichita St.), Cadie Bates (Duke) and Leah Perri (Clemson) all winning over 20 matches apiece to send the team to NCAA tournament appearances in 2017 and 2018.

On the prep side of recruiting, Abella has secured top high school and club talent from coast to coast, bringing in six AVCA High School Beach All-Americans in the six years the list has existed. Mannisto was the first, coming from California in 2014, and has been followed by Carly Schnieder and Katie Smith (Ohio), Abby Carroll (Texas), and most recently with Kaeli Crews (Florida) and Ashley Brasfield (Georgia) in 2019.

Prior to coming to Columbia, he spent the previous six years helping Missouri Valley power Wichita State to its best NCAA volleyball finish in history with a regional semifinal appearance in 2012. Abella coached three AVCA All-Americans and nine All-MVC student-athletes during his time as an assistant coach at Wichita State. The Shockers were ranked as high as ninth in 2008 in the AVCA poll and made six-straight NCAA Tournaments, culminating in the regional semifinal appearance in 2012. Abella also assisted in every area of the Shockers’ program, breaking down video and helping with scouting, communicating with academics, athletic training and strength and conditioning staffs and working with recruiting.

Getting his start in coaching as an assistant with the Newman (Kan.) women’s team, Abella started as a manager at Wichita State before working his way into a full-time role on Chris Lamb’s staff. Abella has also coached on the national circuit, helping the USA A2 National Team to a second-place finish in the 2009 USA Open Championships. Abella served as a head coach and the club director with the ICT Elite Volleyball Club in Wichita.

A former player, Abella served as a team captain for the Newman men’s volleyball team during his three years and helped lead the squad to the national tournament during his playing years. Abella earned Male Student-Athlete of the Year honors as a junior. He also served as the Student-Athlete Advisory Committee president. He transferred across town to Wichita State to complete his bachelor’s degree in communication with a minor in psychology in 2009.

He has put his communications degree to work while at South Carolina, taking on the role of color commentator for the Gamecocks’ SEC Network + coverage during the indoor season.