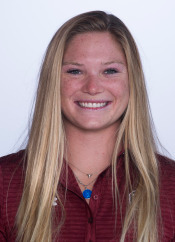 Went 22-11, tying the record for wins by a freshman
Named to the CCSA All-Freshman team after racking up 20 wins between the top two positions of the lineup.
Led the team in service aces
Had a 7-7 record against teams ranked in the AVCA Top-15

Played club volleyball for coach Tony Glessner at Treasure Coast Volleyball.
Her 16s and 17s club teams qualified for the Junior Olympics.
Also lettered in soccer and basketball at The Pine School.
All-area team throughout her high school career.
Two-time MaxPrep’s player of the week.

Daughter of John and Bari Denney
Plans to major in psychology