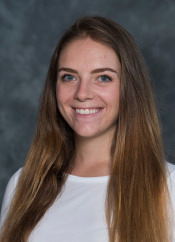 2017-18: Served as hunt seat team captain in her final year with the Gamecocks… Posted a 9-8 record in equitation over flat, with four MOP honors, and added a 7-6 equitation over fences record… Named to the NCEA All-Academic Second Team, the SEC Winter Academic Honor Roll and the NCEA Academic Honor Roll… Earned flat MOP honors and added a jumping point Oct. 27 in the win over Oklahoma State… Scored a jumping victory Nov. 3 against Georgia… Ended the fall season with a flat win over Auburn on Nov. 17… Was named fences MOP in the exhibition win over Converse on Jan. 27… Opened the spring campaign with a flat win against SMU on Feb. 3… Won her jumping battle Feb. 17 against Georgia… Brought home flat MOP honors and added a fences point Feb. 24 against Auburn… Won five straight flat points from March 2 – April 18… Was named SEC Rider of the Month for equitation on the flat in March… Started her streak with an MOP victory against Baylor on March 2… Earned flat MOP laurels on Senior Day against SMU on March 9… Went 2-0 on the flat at the SEC Championship with wins over Georgia on March 30 and Texas A&M on March 31… Picked up a win in the NCEA Championship flat first round against TCU on April 18… Won the final three fences points of her career, with an SEC Championship win over Texas A&M on March 31, an NCEA fences first round win over Baylor on April 18 and an NCEA Championship fences quarterfinal win over Auburn on April 20.