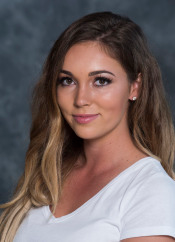 2018-19: Named to the APHA Academic Honor Roll… Took part in four Equitation on the Flat exhibitions for the Gamecocks… Scored in the 70s twice with a 75 against Auburn (Feb. 16) and a 70 opposite of Delaware State on Senior Day (March 8).

2016-17: Made three appearances as a sophomore… Won her jumping point in the hunt seat exhibition victory over Alabama, 80-70, on Sept. 16… Performed a jumping exhibition on Sept. 30 at the Texas A&M meet… Scored an 83 in a flat demo against New Mexico State on Oct. 21.

High School: Graduated from the Madeira School in McLean, Va., where she was captain of the school’s IEA equestrian program, earning the team’s High Point Rider awards in 2015 and 2013… Trained with Marylisa Leffler and Patty Foster… Individual and Team Gold at the USHJA Regional Children’s Jumper Championship (2014), Gran Champion 15-17 Equitation Division at the Mid Atlantic Equitation Festival (2014), Circuit Champion Junior Jumpers in Pensacola, Fla. (2015), Winner of the Junior/Amateur Jumper Classic at the Lexington Spring Premier (2015).