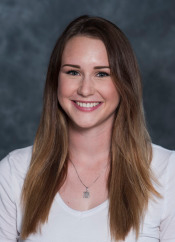 2018-19: Named to the SEC All-Tournament team as the Horsemanship rider… Earned spots on the Farnam All-Academic First-Team and the APHA Academic Honor Roll… Recognized as the NCEA Standout Athlete of the Month for September… Served as the Western captain and competed in both Horsemanship and Reining… Tallied a Horsemanship record of 9-9 with three MOPs and a 4-6 mark in the SEC… Won five-consecutive rides, including three MOPs in-a-row… Claimed both of her Horsemanship rides at the SEC Tournament, taking MOP honors for both… Went 6-10-2 overall in Reining and 3-5-1 against SEC opponents… Helped both the Reining and Horsemanship teams advance to the semifinals at the NCEA Championships.

2017-18: Rode 16 times in horsemanship, with a 6-9-1 record and a team-high three MOP awards… Finished with a 3-3 SEC record… Named to the NCEA All-Academic First Team, the SEC Winter Academic Honor Roll and the NCEA Academic Honor Roll… Named horsemanship MOP in the regular-season opener against Texas A&M on Sept. 29, with a victory of 76.5-74.5… Edged out her Georgia opponent on Nov. 3, 77-76… Grabbed MOP honors in the spring opener, a win over SMU on Feb. 3… Added a second win over Georgia on Feb. 17… Ended the regular season with an MOP honor March 9 against Fresno State, when she collected a 74.5-74 victory… Rode just once in reining, with an exhibition victory Sept. 22 in the Clemson matchup.

2015-16: 6-9-1 overall record with one M.O.P… 2-4 record in horsemanship with one M.O.P. … 4-5-1 record in reining… Won a horsemanship exhibition at South Dakota State in the Gamecocks’ season opener on Sept. 25, beating her opponent, 73-70… Won her first career point and M.O.P. in her competition debut against No. 8 TCU on Oct. 2, posting an event-high score to beat her opponent, 73-72.5… Picked up her second horsemanship victory of the season on Oct. 29 at No. 6 Texas A&M, beating her opponent, 76-74… Won a reining exhibition later in the day at the Texas A&M meet, 67-62… Closed out the fall semester by winning her first career reining point, a 70.5-68 victory on the road against No. 2 Georgia on Nov. 20… Won her reining point against Texas A&M on Feb. 20, 66.5-66, later performing a horsemanship demonstration ride, earning a score of 71… In the regular season finale against No. 6 SMU, she held her opponent to a 69.5-69.5 tie… Competed at the SEC Championship… In the semifinal round vs. No. 1 Auburn, she beat her opponent, 128.5-0… Competed against SMU in the opening round of the NCEA National Championship, winning her reining point, 135-132.