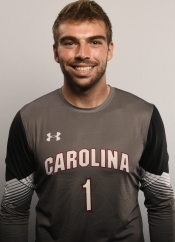 2020-21 (Senior)
Closed his Carolina career with an injury-filled season that limited him to just two games of work in the net… Had nine saves and posted a 1-1-0 record.

2017 (FRESHMAN)
Did not appear in any matches… named to the SEC First-Year Academic Honor Roll and the C-USA Commissioner’s Honor Roll.

PRE-COLLEGE
Played club for Orlando City and was able to train with their USL and MLS teams… Spent time at the U.S. Academy… Helped Orlando City to three consecutive seasons with 20-plus wins.

PERSONAL
Born Jan. 4, 1999… son of Jeff and Sharon Bauer… also considered Yale and UCF… likes to read and watch Netflix in his free time… listing saving penalty kicks as greatest athletic thrill… list ping pong as one of his favorite hobbies… plans to major somewhere in the business school.