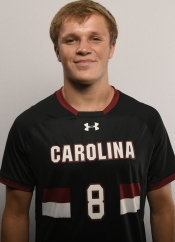 2021 (Graduate Student)
Was an anchor for the Gamecocks, according to Coach Tony Annan … Played in 14 matches, including 13 starts … Scored his only goal of the season against Mercer when he scored the game-winner to give the Gamecocks a 2-1 lead on Sept. 21 … Assisted on a goal against Georgia Southern on Oct. 12 in a 3-1 victory … Put up six shots from the defender spot, including four on goal … Was a key for the Gamecock defense that shut out three opponents … Logged 1,226 minutes for Carolina, which was fourth-most for the Gamecocks … Earned CoSIDA Academic All-District honors.

2020-21 (Senior)
Earned 12 games of work in the midfield during his senior season… Posted one shot.

2019 (Junior)
Saw action in 16 games with 14 starts… Finished the year with four shots… First appeared and started on 8/30 at Clemson.