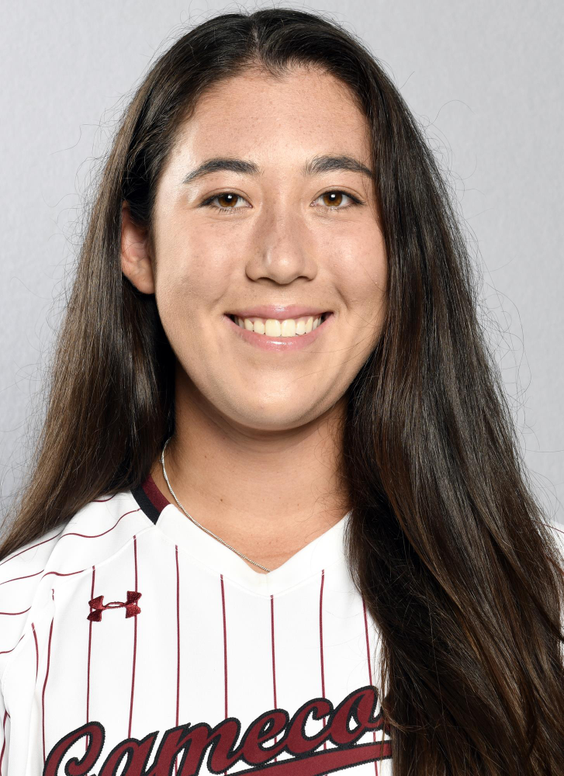 2021 (5TH):
Appeared in 19 games, starting seven times in the circle… Tied for second on the team with five victories… Pitched three complete games… Had a season-high eight strikeouts in a complete game victory over Coastal Carolina (2/20).

2021 (SENIOR):
Posted a 3-7 record in 27 appearances and 15 starts in the circle… Had a 4.12 ERA with five complete games and a shutout… Also earned Carolina’s lone save of the season… Had 28 strikeouts in 74.2 innings of work… Earned her first win of the season on 3/3 in a 10-1 (5) win over Winthrop… She went all five innings with just one earned run and five strikeouts… Earned the victory on 3/20 against No. 20 UCF in a 9-1 (5) win… She went all five innings with just one run allowed… Named to the All-SEC Community Service Team.

2020 (JUNIOR):
In a season cut short due to injury, Kelsey Oh posted a Carolina-best 51 strikeouts in 32.2 innings of action… Finished the year with a 2.14 ERA and 4-2 record in seven appearances, six of which were starts… Tossed three complete games and one shutout… Held opposing batters to a .198 batting average and just 16 walks… Started the year in stellar fashion, going all seven innings with just two runs allowed and eight strikeouts to help Carolina to a 3-2 win over Ohio State on opening day (Feb. 7)… Followed it up the next day with a win in four innings of work with just one hit and six strikeouts to help Carolina to the 11-1 win (5) over Southern Illinois… Went six innings with just two hits allowed and 11 strikeouts to help Carolina to a 10-0 (6) win over Kansas on Feb. 14… Was named SEC Pitcher of the Week for the first time in her career on Feb. 10.

2019 (SOPHOMORE):
Went .500 in the circle in 18 appearances with 13 starts… Earned a save and had two shutouts in 62 innings pitched… Produced five wins despite a 3.73 ERA… Had undoubtedly her best performance of the year in a 2-0 win over Ole Miss on Mar. 23… She went all seven innings with just three hits, no runs, one walk and nine strikeouts… Threw a complete-game shutout against Charlotte, as well, on Apr. 3.

2018 (FRESHMAN):
Proved she belongs in the circle from the first day, posting team-best 1.92 ERA on a 14-5 record on her way to leading the team with 135 strikeouts… Appeared in 35 games, including 18 starts on her way to 10 complete games and a save… Was the only Gamecock pitcher to allow fewer than 10 home runs, as she allowed just eight… Held opposing batters to a low .195 batting average… Completely shut down right-handed batters, holding them to a .145 average… Did not allow a triple… In 18.1 innings of work in the first inning of games, posted a 0.76 ERA with just four runs and 13 hits… Held hitters to a .087 batting average when ahead with an 0-2 count… Earned her first career win in a complete-game victory at Charlotte with nine strikeouts (2/14)… Followed the Charlotte win up with a complete-game win against Georgetown (2/18)… Shut Oklahoma down in two innings of action in Norman, allowing one hit and no runs (3/10)… Earned her first career SEC win against Tennessee in three innings of work (3/23)… Threw her first-career complete game shutout in a win over Furman in which she had eight strikeouts (3/28)… Had an immaculate inning in the first frame of her seven-inning win over Georgia Southern, finishing with seven strikeouts total (4/4)… Threw a season-best 13 strikeouts in a seven-inning win over UNCG to open the Columbia Regional… Named to the NFCA Top 25 Freshman Watch List… Named to the All-SEC Freshmen Team.

HIGH SCHOOL:
Earned four letters in softball at Mount Saint Dominic Academy … Twice the New Jersey Gatorade Softball Player of the Year (2015-16) as well as the NJ Pitcher of the Year … Led her Lady Lions team to a Non-Public A state title in 2014 … Posted sub-1.00 ERAs in her final three years, including a 0.61 ERA as a senior … Won three Essex County Tournaments in her career … Named first-team All-Non-Public by NJ.com for four-straight years … Struck out 310 batters as a sophomore, her career best, but also had a 21:1 strikeout-to-walk ratio as a senior … That included three games with 16 K’s and three no-hitters … Posted 21 strikeouts in an 11-inning appearance during her junior season … A three-time Men of Essex Softball Athlete of the Year winner … One of 18 New Jersey high school pitchers to compile 1,000 career strikeouts … Played with the Jersey Intensity travel-ball group.

PERSONAL:
Kelsey Marie Oh is the daughter of Ken Oh and Jennifer Giordano … Has two siblings: sister Kayla and brother Kyle … Chose South Carolina over Michigan, Minnesota, Auburn and Boston College … Her sister Kayla plays softball at the College of Charleston … Says her favorite athlete is Michael Phelps … Earned her bachelor’s degree in May of 2021 in marketing and management… Graduated with her master’s degree in international business in May of 2022.