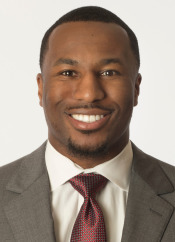 Jarett Gerald enters his third season as special assistant to the head coach for the Gamecocks in 2017-18. Gerald previously served as a graduate student manager for the team for the 2013-14 and 2014-15 seasons. In his current role, Gerald assists with many facets of the program, including assisting with film exchange, serving as the housing and community service liaison for the staff and managing head coach Frank Martin’s day-to-day schedule.

Gerald, a native of McDonough, Ga., was a four-year letterwinner for the Gamecock track and field team, competing in the long jump and triple jump events. He was a four-time SEC Honor Roll member and two-time Iron Gamecock Award winner for the team. Prior to his time as a graduate student manger, Gerald was an academic advising intern at the Dodie Academic Enrichment Center at South Carolina.