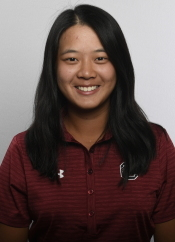 2020-21
Played in all 10 tournaments for Gamecocks, earning two top-5 finishes with a low round of 3-under 69… named Second Team All-SEC, her third time earning All-SEC… notched the best finish of her Carolina career, taking second at the Gamecock Intercollegiate with a 4-under 212… earned SEC Golfer of the Week honors on March 10 for her performance at the Gamecock Intercollegiate… bookended her performance at the Moon Golf Invitational with first round 2-under 70 and an even par 72 to help the Gamecocks win their second tournament of the season… notched her first top-5 finish of the season, tying for third in the stroke play portion of the East Lake Cup… defeated her Florida opponent in 19 holes in the East Lake Cup semifinal to clinch the win for the Gamecocks… earned her first top-10 finish of the season, and sixth of her career, tying for ninth at The Ally with a 1-under 215 for the tournament… finished in a tie for 26th place at the Blessings Collegiate Invitational, notched four birdies in both the first and second round at the tournament.

2019-20
Competed in five tournaments and ranked second on the team in stroke average (72.73)… Notched 3 top-20 finishes, tied for third on the team… Won gold at the 2019 Southeast Asian Games with her the Philippines team, winning her matchup in the gold medal contest, she took fourth in the individual competition as well… Earned her best finish of the season (T9) at the Tar Heel Invitational with her best 54-hole score of the season (213)… Notched her best round of the year at the IJGA Collegiate Invitational with a 67 in the second round… Earned Golfweek All-America Honorable Mention distinction for the third year in a row, making her the third Gamecocks to earn All-America honors in three consecutive years… Won the SEC Scholar Athlete of the Year award for the second year in the row, she’s the only two-time winner in program history… Named to the CoSIDA Academic All-America First Team for the second year in a row.

2018-19
Continued as one of the top golfers in South Carolina history in second season in Columbia… Competed in all 10 tournaments and ranked second on the team in stroke average (72.82) and rounds of par or better (12)… Was the only Gamecock to finish with multiple top-5 finishes during the season (4)… Won a Gold medal at the 2018 Asian Games with her native country, Philippines… Captured the 2019 Philippine Amateur Open Championship in January… Named to the 2019 Arnold Palmer Cup International Team… Was named on multiple ANNIKA Award Watch Lists throughout the season… In September of 2018 captured the Kuala Lumpur Amateur Open, winning by three strokes…. Recorded her best round of the 2018-19 campaign at the Ruth’s Chris Tar Heel Invitational, carding a 3-under 69 on her way to her first top-5 finish of the season and her best 54-hole round score of the season (212)… Had a streak of four-straight tournaments finishing in the top 10, highlighted by a top-3 finish at the Allstate Sugar Bowl (T3)… Closed out the Allstate Sugar Bowl with four-straight birdies on her way to the top-3 finish… Finished in a tie for 5th at the 2019 SEC Championships, her best postseason individual finish as a Gamecock… Named 2019 SEC Scholar Athlete of the Year… Named to the 2019 SEC Community Service Team for her efforts and contributions to the public… Named First-Team All-SEC for the first time in her career…


2017-18
Emerged as a steady force in the Gamecock lineup in her first season at Carolina…Competed in each of the team’s 10 tournaments and ranked second among Carolina golfers in stroke average (72.45) and rounds of par or better (16)…One of two Gamecocks to notch multiple (3) top-10 showings…Finished par or better in each of the team’s first three tournaments of the fall in a stretch highlighted by an 11th-place finish (210, -6) at the 2017 Tar Heel Invitational…Fired a career-low 66 (-6) in the opening round of the 2018 Florida State Match-Up en route to her first top-10 showing (T10, -2) for the Gamecocks…Boasted her best finish of the season at the 2018 Bryan National Collegiate, where she tied for third with a 54-hole mark of 219 (+3)…Grabbed a top-10 finish (T9, +2) in her postseason debut for Carolina at the 2018 SEC Championship…Tied for 27th at the 2018 NCAA San Francisco Regional after totaling a three-day score of 218 (+2)…Shot par or better in three of her six postseason rounds.

Prior To South Carolina
Captured the individual title at the 2017 Women’s Porter Cup in June and advanced to match play at the 2017 North & South Women’s Amateur Championship and 2017 U.S. Girls’ Junior Championship…Spent her freshman campaign at Boston College last season season, leading the team with a 72.29 stroke average…Earned All-ACC honors in her lone season with the Eagles…Tallied two victories as a freshman, capturing medalist honors at the 2016 Dartmouth Invitational and 2017 Lady EagleCat Invitational…Selected as BC’s Athletics Rookie of the Year…Notched top-10 finishes in seven of her 10 events and ended the season with five top-three showings…Became the second golfer in program history to qualify individually for an NCAA Regional in the spring of 2017…Posted three victories in 2015 prior to Boston College and also finished atop the leaderboard at the 2016 MVPSF Visayas Regional Match Play Championship.

Personal
Born May 21, 1999…Daughter of Lily and Charlie Go…Named the salutatorian for her graduating class of 2016 at Centre For International Education…Her brother Lloyd Jefferson Go played golf at Seton Hall University…Chose South Carolina because of the experienced coaching staff.

Coach Kalen Anderson on Go
“She is very consistent, and she will be a steady player in our lineup. She has a strong wedge and scoring game, and she is an excellent putter.”