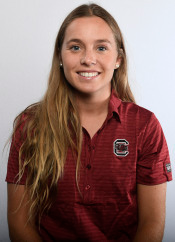 2017-18
Emerged as one of the top golfers in the country during her senior season …Ranked fifth in the SEC and 10th in NCAA Division I with a 71.00 stroke average, the lowest single-season mark in program history…Captured the individual title at the 2018 Florida State Match-Up and 2018 SEC Championship to become the third player in school history to notch two or more victories in one season…Totaled the program’s third-lowest 54-hole mark (206, -10) en route to her win at the Florida State Match-Up…Defeated Arkansas’ Maria Fassi in a playoff to garner the individual crown at the SEC Championship after both golfers finished at 7-under 209…Posted the school’s second-lowest three-round total (205, -11) and collected runner-up honors at the 2017 Tar Heel Invitational…Tallied her fourth top-three showing of the season at the 2018 Evans Derby Experience (T3, -7)…Notched a top-five finish (T5, -4) at the 2017 Landfall Tradition…Fired a 6-under 66 twice throughout the season and led the Gamecocks with 18 rounds of par or better…Broke par in 11-straight rounds and posted four-consecutive top-five finishes in a stretch that spanned four tournaments…Placed inside the top 25 in all but two tournaments and turned in the top score among Gamecocks six times on the season.

2016-17
Enjoyed a breakthrough year as a junior after competing in all 11 tournaments for the Gamecocks…Ranked second on the team with a 72.71 stroke average, the fourth-lowest single-season mark in program history…Four of her five top-10 finishes came during the spring season in a stretch highlighted by a 10th-place showing (223, +7) at the 2017 NCAA Championship…Her performance at the NCAA Championship marked the fifth-best individual finish at the event in school history…Tied for fifth (219, +3) at the 2017 NCAA Columbus Regional following her final-round 70 (-2)…Totaled a career-best 213 (-3) at the 2017 FSU Match-Up en route to eighth-place honors…Posted a top-10 finish (T9, +5) at the 2017 Darius Rucker Intercollegiate and carded a 69 (-3) on the final day of the 2017 SEC Championship to finish in a tie for 25th at 5-over 218…Finished inside the top-25 in all seven spring events…Closed the fall with a pair of top-20 finishes, placing in a tie for 15th (217, +1) at the 2016 Tar Heel Invitational before earning a share of ninth-place (214, -2) at the 2016 Landfall Tradition…Her seven top-20 showings and five top-10 finishes both ranked second on the team…Shot par or better 13 times and match her career-best 18-hole mark (69) three times throughout the year.

2015-16
Played in all 11 tournaments for South Carolina, boasting the third-lowest stroke average (74.38) on the team…Recorded four top-20 finishes and two top-10 showings, including a career-tying eighth-place performance at the 2016 SEC Championship…Fired a career-low 69 (-3) in the opening round of the SEC Championship and ended her weekend with a 217 (+1), her lowest 54-hole total ever for the Gamecocks…Also posted a 69 (-3) in the second round of the 2016 NCAA Baton Rouge Regional…Placed in a tie for eighth (219, +3) at South Carolina’s spring opener, the 2016 FSU Match-Up…Ended her sophomore campaign with top-20 finishes in three of her last four tournaments…Broke par in two of four rounds at the 2016 NCAA Championship on the way to a 288 (E) to tie for 16th…Her eight rounds of par or better were the third-most among Gamecocks, and she was just one of three South Carolina golfers to notch multiple top-five finishes…Ranked second in the field at the NCAA Championship with 56 pars during the four-round stroke-play portion of the event.

Coach Kalen Anderson on Olarra: “Ainhoa Olarra is very feisty. She’s going to bring a lot of spirit and energy to the team.”