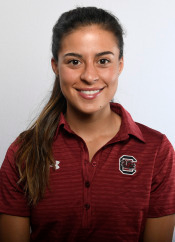 2016-17
Played in four tournaments in her second season at Carolina…Made two appearances in the fall, competing in the 2016 Cougar Classic and 2016 Tar Heel Invitational…Posted a second-round 72 (E) at the Cougar Classic before finishing in a tie for 83rd with a three-day mark of 226 (+10)…Grabbed a top-50 showing at the Tar Heel Invitational (T45, +8)…Turned in her best performance of the season while competing as an individual at the 2017 Darius Rucker Intercollegiate, finishing in a tie for 27th (222, +9) in a three-day stretch highlighted by a 1-under 71 in the final round…her 54-hole mark at the Darius Rucker Intercollegiate marked a career low…Placed in a tie for 71st (235, +19) at the 2017 Bryan National Collegiate.

2015-16
Competed in seven tournaments as a freshman, including the NCAA Baton Rouge Regional and the NCAA Championship…Sported a 77.43 stroke average, and her seven tournament appearances were tied for the most among South Carolina freshmen…Played in all four of the Gamecocks’ fall tournaments, with her best showing during that stretch coming in the 2015 ANNIKA Intercollegiate when she placed 57th (234, +18)…Carded a career-low 70 (-2) in the second round of the 2015 Mason Rudolph Championship, her first collegiate tournament…Her 70 matched the lowest round by a Gamecock freshman on the season…Displayed steady play at the 2016 NCAA Baton Rouge Regional on the way to a career-best finish (T30) and 54-hole score (223, +7)…Placed 81st in the 2016 NCAA Championship following a four-day total of 312 (+24).

Prior to South Carolina

A native of Chile, attended Hilton Head Preparatory School in Hilton Head, S.C., and was a student at the Junior Players Golf Academy in Hilton Head…represented Chile in the South American Amateur and Junior Orange Bowl in 2013 and is currently a member of the Chilean National Team…finished 13th at the Junior Orange Bowl with rounds of 72-73-75-77…represented Chile in the 2013 Copa Los Andes in Bogota, Columbia…won the IJGT Invitational at Harbor Town and the IJGT Georgia Open…finished second at the Optimist International Tournament of Champions…owns a scoring average of 73.71 to rank 23rd in the 2015 graduate class…holds a career-low round of 68 with a best two-day tournament total of 138 (-6) on a pair of 69s…the 2012 Player of the Year on the Hurricane Junior Golf Tour.