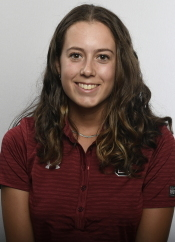 2018-19
Ended Gamecock career by making an appearance in all 10 of Carolina’s tournaments… Ranked third on the team in stroke average (74.64) and had seven rounds of par or better… Registered best finish of her career in the fall season finale, finishing the Landfall Tradition in a tie for sixth, highlighted by her 2-under 70 in the second round… Ended with a season-best 217 at the Darius Rucker Intercollegiate, using an opening round, 2-under, 69 to help her finish in a tie for 12th… Won a pair of matches during the season, including a victory in the SEC quarterfinals against Mississippi State… Ended her final round as a Gamecock with a 1-over 73 at the NCAA Cle Elum Regional.

2015-16
Competed in all seven of South Carolina’s spring tournaments after joining the team at the start of 2016…Her 76.82 stroke average led all freshmen and ranked fourth among Gamecocks…Found her stroke during the NCAA postseason, earning a tie for 19th place at the 2016 Baton Rouge Regional with a career-best 219 (+3)…Shot par or better twice in Baton Rouge to record her first career top-20 finish…Displayed poise down the stretch of the 2016 NCAA Championship, carding a 74 (+2) in each of the final two stroke-play rounds…Took four-time All-American Mariah Stackhouse of Stanford to the final hole in her NCAA Championship Quarterfinal Match before falling, 1-down…Made her collegiate debut at the 2016 FSU Match-Up, placing in a tie for 57th (237, +21)…Recorded two top-50 finishes during the regular season, finishing in a tie for 39th (225, +12) at the 2016 Darius Rucker Intercollegiate before placing in a tie for 34th (230, +14) at the 2016 Bryan National Collegiate.

Prior to South Carolina
Built an impressive resume while competing in Europe as a native of Lachapelle-Auzac, France… helped lead the French National Team to the 2015 European Ladies’ Team Championship and was a member of the 2014 team that won the European Girls’ Championship in Slovakia…earned medalist honors at the 2014 ANNIKA Invitational Europe and was No. 1 in the 2014 European Girls’ U18 rankings… won the individual title at the 2013 French Amateur.

Personal
Born Feb. 19, 1997… plans to major in biological sciences… chose South Carolina because she really liked the coaches and the facilities, and she thought of the team as a family ….also drew interest from Oklahoma State, Arizona, Texas, Kennesaw State and Michigan State …daughter of Lionel and Nathalie Veysseyre…has a younger sister, Florine.