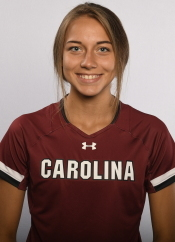 2017: Saw time in each of Carolina’s 23 matches in her first season with the Gamecocks…totaled four points on four assists…her four assists led all Gamecock freshmen and stood as the second-best total on the team… recorded the game-winning assist in Carolina’s victories over High Point (8/27) and Arkansas (10/8)…played a season-high 39 minutes against the Panthers and Tennessee (9/24) and logged double-digit minutes on the field in each of Carolina’s five NCAA Tournament matches…put two of her 10 shots on goal.

PRE-COLLEGE: Played club soccer for the FC Stars of Massachusetts in the Elite Clubs National League (ECNL)…helped guide the FC Stars to the Northeast Conference title and a spot in the playoffs in 2016…tabbed her club’s MVP in 2015 after leading the team to the national finals…played four years at Burr and Burton Academy, where she was a three-time All-State honoree and a four-time All-League selection…was the team’s leading goal scorer throughout her high school career as well as an All-American candidate…grabbed team MVP laurels as a junior and senior…received the team’s Coaches Award in her first season for the Bulldogs, who captured their first ever Division I State Championship during her time at Burr and Burton Academy.

PERSONAL: Born July 20, 1999…daughter of Brett Woodard and Mary McDonald…member of the National Society of High School Scholars and named to her high school’s Honor Roll for the 2016-17 season…plans to major in psychology.