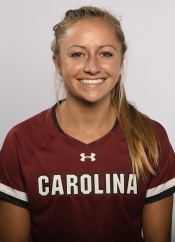 2019: Played in two matches for the Gamecocks… Played in a season-high 45 minutes against Jacksonville.

PRE-COLLEGE: Played club soccer for the Carolina Elite Soccer Academy (CESA) from 2014-16, competing on the U-17 and U-18/19 teams…helped guide CESA to third-place honors in the Elite Clubs National League (ECNL) SE Region and a spot in the ECNL Nationals in the 2015-16 season…CESA placed fifth in the SEC region for the 2016-17 season…played for the SC98 squad for the 2014-15 season and took part in the 2015 Region III camp…was a four-year letterwinner at Savannah Christian Prep School, playing all over the field…tabbed the 2016 Greater Savannah Best of Preps after leading the team in goals (16) and assists (9)…received the 2015 Golden Boot Award as the team’s top goal scorer and was named the ESPN Radio/Savannah Athlete of the Week in the spring of 2016…started every game as a freshman and will serve as the team captain in her senior season.

COACH SMITH ON JENN: “Jenn has the versatility to play in the back or up top as a wide player. She has tremendous speed, and we look forward to seeing how she uses that to her advantage as she competes up top or in a more defensive role. Her speed is definitely an asset to be able to have the ability to go 1 v 1 and get behind teams in the attack and also defensively stay with forwards who have pace.”