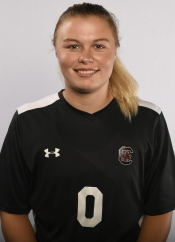 2018: Started in net in all 21 matches for the Gamecocks… her 0.59 goals against average was second in the SEC and ranked 21st in Division I… Tallied nine shutouts to give her the most career shutouts in South Carolina women’s soccer history (34)… Tallied the junior record for goals against average… was fourth in the SEC in save percentage (.815)… Made a career high 10 saves against Penn State in the NCAA Second Round… Made seven saves against Tennessee that helped her earn multiple Player of the Week honors across the country… No goals were allowed in 12 of her 21 appearances in goal… Made four saves in a shutout of eventual SEC regular season champion Vanderbilt (10/12)… Shutout five 2018 NCAA Tournament teams (Clemson, Wake Forest, Tennessee, Auburn, Vanderbilt)… Registered her 50th career win against UNCG (11/9)… Totaled 53 saves for the year.

2017: Started in net in each of Carolina’s 23 matches…her SEC-leading 0.48 goals against average ranked 10th in NCAA Division I and stood as the second-lowest single-season mark in program history…tallied the second-most shutouts (14) in one year in school history, ranking third nationally in the statistical category…her goals against average and shutouts both set Gamecock sophomore records…ranked second in the conference in save percentage (0.828)…five of her clean sheets came against ranked foes, and she recorded a shutout in eight of Carolina’s 10 league matches…conceded 11 goals on the year and gave up just three in SEC action…registered a season-high nine saves in a 1-0 overtime victory over Notre Dame (9/1) and stopped five shots against No. 4 Clemson (9/8) and in the Women’s College Cup against No. 1 Stanford (12/1)…totaled 53 saves for the year.

2016: Enjoyed a fantastic first season at Carolina after starting 21 matches in net…ranked first in the SEC and eighth in Division I with a program-record 0.43 goals against average…her 11 shutouts led the league and were good for the ninth-best mark nationally…topped the conference in save percentage with a mark of 0.868 which ranked 13th among Division I keepers…the 11 shutouts were the most by a freshman in program history and the third-best total by a Gamecock in one season…finished the season with a record of 18-2-1, earning the second-most wins in a year in school history…eight of her 11 clean sheets came in league play, including a shutout against No. 17 Florida (10/16)…totaled three saves to post a shutout in the NCAA Sweet 16 against No. 4 BYU (11/19)…denied five shots in the NCAA Tournament against No. 20 Colorado (11/17) and UNC (11/25)…made eight saves in her NCAA debut in Carolina’s season opener at Oklahoma (8/19)…conceded just three goals in SEC action and allowed nine goals for the year…logged 59 saves for the season, and her 1,883 minutes in net were a program record for a Gamecock freshman.

PRE-COLLEGE: Competed in the U.S. National Team Player Pool from 2011-14…was a member of her Olympic Development Program (ODP) state and regional teams from 2011-13…played club soccer for the Concorde Fire of the Elite Club National League (ECNL) under head coach Gregg Blasingame, serving as the team captain for four years… helped lead the Fire to the conference title three times…named to the ECNL Phoenix U17 All-Events Goalkeeper Team.

PERSONAL: Born Feb. 3, 1998…daughter of Dan and Jacque Krzeczowski…was a member of the National Honors Society during her freshman and sophomore years…intends to major in visual communications…enjoys making and editing videos…her father Dan played football at Air Force (1981-84) and her grandfather played football at Purdue (1953-56).

COACH SMITH ON MIKAYLA: “Mikayla is a goalkeeper with national pool experience, and she’s been outstanding in her youth development. We look forward to seeing how she progresses through college. She has tremendous tools and possesses all the things you look for in a goalkeeper.”