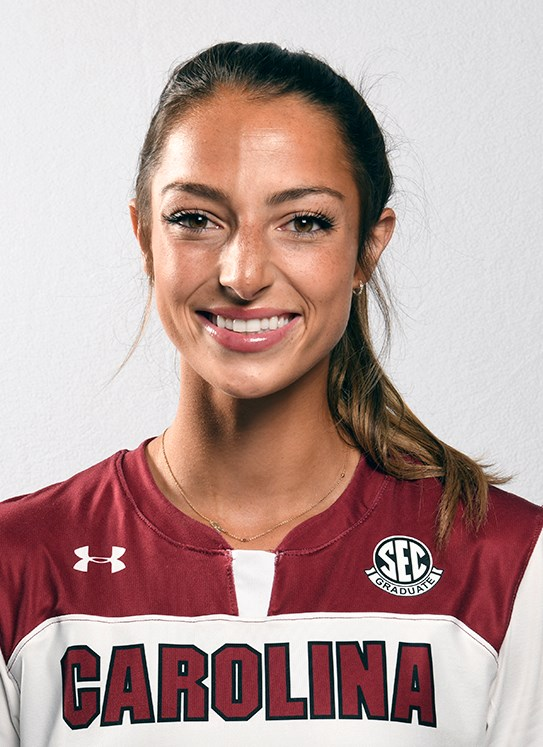 2021: Started and played in all 22 matches… Finished the year 43rd in the nation and sixth in the SEC with nine assists… Ranked 72nd in the country and eighth in the SEC averaging 0.41 assists per game… Finished the season second on the team in assists, points, shots, and shots on goal… Third on the team in goals… Her nine assists for the season were tied for 10th most in a single season… Her three game-winning assists were tied for seventh in a single season… Named the SEC Offensive Player of the Week in week 7, thanks to a three-point performance in an upset win over No. 13 Auburn, scoring her only game-winning goal of the season… Had a pair of two-assist games on the season, NC State (8/29) and Missouri (9/16)… Twice had a pair of three-point matches, Auburn (10/1) and Alabama (10/24).

2020-21: Remained one of the most consistent Gamecocks during the shortened, and split, season… Started 15 of the 16 matches during the season, including each of the last 11 matches…Scored two goals and added four assists for a total of eight points during her fourth season with the Gamecocks… Tied for the third-most shots on the team with 21 with 13 of those on goal for a team-leading 61.9 shots on goal percentage (Min. 10 SOG)… Scored one game-winning goal during the season against Coastal Carolina in a 3-0 win at Stone Stadium… Notched two assists in a 3-0 victory over Elon on the road… Scored her first goal of the season against Vanderbilt, the eventual SEC Tournament champions… Assisted on an insurance goal against Mississippi State on Senior Night… Assisted on the game-winning goal against Montana in the NCAA Tournament First Round… Was named the SEC Offensive Player of the Week after her performance against Vanderbilt… Was named to the SEC Preseason Watch List.

2019: Scored five goals for the Gamecocks, good enough for tied for third most on the team while appearing in all 24 matches while starting in 23… She scored in back-to-back matches, helping the Gamecocks to a 3-0 win over William & Mary and a 6-0 win over Jacksonville… Sparked the Gamecocks largest comeback under Shelley Smith with the first goal of a 5-2 win on the road against Alabama… Scored the game-winning goal against Kentucky on the road… Scored the game-winning goal in the SEC Tournament Championship match, helping the Gamecocks win their second SEC Tournament title in program history… Had three assists during the season, including the game-winning assist against Missouri in the 1-0 win… Led the team in shot on goal percentage at 66.7 percent.

2018: Appeared in 15 matches for Carolina… Finished with one goal and one assist after coming off a knee injury which kept her out of the first three matches of the season… Scored game-winning goal against Coastal Carolina (9/9) in a 3-0 win… Notched an assist in 2-0 win over No. 11 Tennessee (9/16) on the road… Finished with multiple shots in three different matches, including two on goal against Wake Forest (9/6)… Finished with eight of 10 shots on goal.

2017: Started 22 matches and appeared in all 23 games during her freshman campaign…ranked sixth on the team and third among Carolina freshmen with seven points on three goals and an assist…tallied an overtime game-winner on the road against Notre Dame (9/1), converting from inside the box in the 102nd minute… her other game-winning tally on the year came in the NCAA Tournament First Round against Alabama State (11/10) when she deflected in a goal three minutes into the game…led all Gamecock freshmen and ranked second on the team with 19 shots on goal.

PRE-COLLEGE: Played club soccer for Sockers FC of the Elite Clubs National League (ECNL)…participated in the U.S. U-15 Girls’ National Team Training Camp in 2013 before competing at the ECNL/id2 National Training Camp in 2016…member of the ECNL Player Development Program (PDP) in Wisconsin from 2014-16 and was part of the Illinois Olympic Development Program (ODP) State Team in 2010 and 2014…played in the ODP National Championships in Arizona in 2014 and was part of the 2014 ODP Region II Team…the Sockers were the U.S. Club Soccer National Champions in 2012 and 2013, and they reached the National Playoffs in the 2014 and 2015 seasons…played for Neuqua Valley High School, leading the team in goals as a freshman.

PERSONAL: Born Nov. 13, 1998…daughter of Leslie and Patrick Gareis…tabbed an Illinois State Scholar in 2017 and received the 2016 Neuqua Honors Program Leadership Award…earned the NVHS Academic Award each year while in high school and was named to the High Honor Roll every semester… Earned her bachelor’s degree in December of 2020 in advertising.

COACH SMITH ON RYAN: “Ryan is a true left-footed attacking player. She’ll be someone who will be dangerous in the wide areas and anywhere up top. She is a true attacking minded player with excellent 1 v 1 skills. She will be a threat in the attack with her pace and her ability to set others up or score goals herself.”