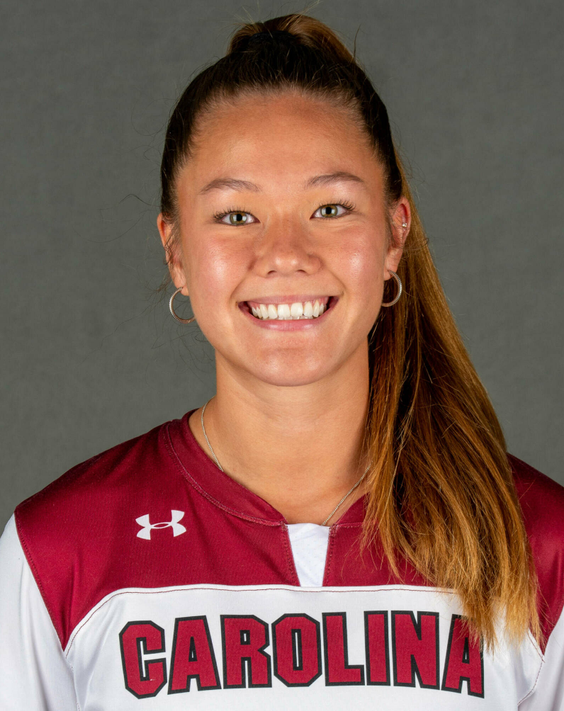 2021: Started all 22 matches… Played in the third most minutes of any non-goalie (1,770)… Tied for the team lead with two game-winning goals… Tied for third on the team with three assists …Both of her game-winning goals came in the NCAA Tournament against Hofstra (11/19) and Penn State (11/21)… Tallied a goal and an assist against Hofstra(11/19) in the NCAA Tournament… Had the game-winning assist on Corinna Zullo’s goal against NC State (8/29)… Played in every minute of eight matches, including a double-overtime game against Georgia (10/15).

2020-21: Was a force in the midfield for the Gamecocks during her second full season with the Gamecocks… Started 11 of the 14 matches she was available for during the split season after going on multiple international trips with her native country of Canada… Scored two goals and added one assist out of the defensive midfielder position… Her first goal of the season was a gamewinner against No. 3 Arkansas, giving the Gamecocks their second-highest ranked win in program history in the 2-1 win… For her performance against No. 3 Arkansas, she was awarded with two National Player of the Week honors while also being honored by three separate publications… Scored again in her next match against Florida, and added an assist, helping the Gamecocks score their most goals against Florida in program history in the 4-2 win at home and it was only the 10th time the Gators had given up four or more goals since 2000… Finished with a total of 12 shots during the season, five on goal… Played 951 minutes throughout the season… Was named on the SEC Preseason Watch List.

2019: Appeared in 23 matches and started in 10… Made collegiate debut against No. 21 NC State in the starting lineup and notched two assists in the 2-1 victory… Notched a multi-point performance against Jacksonville in a 6-0 win for the Gamecocks… Assisted on the game-winning goal over Kentucky in a 1-0 win… Scored her first career game-winning goal against Samford in the NCAA Tournament First Round in a 3-0 victory… Was sixth on the team in shots with 19 and was fifth on the team in shots on goal (12)… Finished with the second best shot on goal percentage on the team (min. 10 shots)… Selected to Canadian U20 National Team camp after the season… Selected to Canadian 2020 U20 Concacaf roster.

2018: Did not appear in any matches due to injury.

PRE COLLEGE: Tabbed the 2017 League 1 Ontario Young Player of the Year…selected as the Senior Athlete of the Year as a junior while at John Fraser Secondary School…competed for the Unionville Milliken Soccer Club in Canada… attended the U15 and U17 CONCACAF tournaments with Canada, winning the gold medal at the U15 and the bronze at U17… attended the U17 women’s World Cup in Jordan in 2016.

PERSONAL: Born July 13, 2000…daughter of Debbie and Byoung Chang… Earned her bachelor’s degree in May of 2022 in social work.