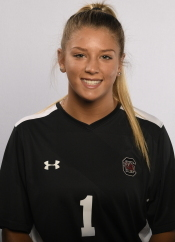 PRE-COLLEGE: Played club soccer for HBC Impact ’98…served as a team captain while playing for East Islip High School, leading the program to league titles and an undefeated mark in 2015…was also a gymnast in high school, earning five letters in the sport.

COACH SMITH ON VICTORIA: “Tori is a tremendous shot stopper. She is quick and has performed at a high level with her club program. She makes up for her size with her quickness and ability to read the game. We look forward to seeing her grow as a goalkeeper at this level and challenging the other goalkeepers in the program from the start.”