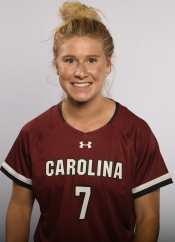 2017: Started all 23 matches in the Gamecock midfield…ranked fourth on the team with a career-high 10 points and totaled the second-most assists (4) among Gamecocks…netted three goals, finding the back of the net against Alabama (9/15), Georgia (10/22) and in the NCAA Tournament Elite Eight against No. 16 Florida (11/24…her goal against the Crimson Tide was the game-winner…helped the Gamecocks rank ninth in Division I with an SEC-leading 0.47 goals against average and set a program single-season record with 16 shutouts…Carolina allowed three or fewer shots on goal in 16 matches…put eight of her 27 shots on goal.

2016: Started 23 of Carolina’s 24 matches as a holding midfielder, seeing time in every game…tallied seven points on two goals and a career-high three assists…her seven points were tied for the fifth-best total among Gamecocks…netted her first goal of the season at home against Kentucky (9/25) before finding the back of the net in Carolina’s 3-1 win over No. 11 Arkansas (10/9)…two of her three assists resulted in game-winners, as she set up late goals on the road against Texas A&M (9/29) and Mississippi State (10/6)…played all 90 minutes in Carolina’s 1-0 wins over No. 20 Colorado (11/17) and No. 4 BYU (11/19) in the second and third rounds of the NCAA Tournament…attempted 19 shots on the season, putting six on target.

2015: Played in 18 matches, making seven starts…finished with a career-high eight points on three goals and two assists…registered her first career assist against Northeastern (8/21)…netted the game-winner against Oklahoma (8/23) scoring in the 106th minute, and her other goals during the season came in wins over Colgate (9/4) and Tennessee (10/29)…attempted eight shots on the year, putting five of them on target.

2014: Played and started all 25 matches of the 2014 season in the midfield, logging 1,500 minutes…scored four points on two goals…both goals were game-winners…first goal game against Ole Miss (10/19) in just the second minute of play…found the back of the net again in the 12th minute in a 3-0 win over Mississippi State (10/30)…put both of her shots on goal vs. the Bulldogs in the regular-season finale…played a season-high 99 minutes against No. 22 Clemson (11/14) in the first round of the NCAA Tournament…converted her opportunity in PKs against the Tigers…was in the penalty kick line up against Seattle (11/21) just a week later and again converted, the only Gamecock to make their kick in both rounds.

PERSONAL: Lindsey Marie Lane was born on Sept. 9, 1995…parents are Dave and Trish Lane…her father Dave played football at Lafayette College…her mother Trish swam at Virginia Tech and compete in the Ironman Triathlon World Championships in 2006 and 2008…plans to major in exercise science…her hobbies include soccer, running and paddleboarding