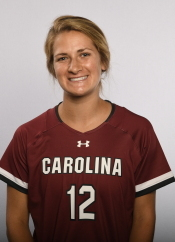 2017: Started 22 of Carolina’s 23 matches in the midfield after being selected as a team captain prior to the season…helped the Gamecocks register a program single-season record 16 shutouts, four of which came in the 2017 NCAA Tournament…Carolina ranked ninth in NCAA Division I with an SEC-leading 0.469 goals against average…attempted 20 shots on the season, putting three on target.

2016: Played in all 24 matches as a holding midfielder, drawing 23 starts…boasted career highs in points (5) and assists (3) and netted a goal for the second-straight season…helped Carolina tally an SEC-leading 14 shutouts and rank sixth in Division I with a program-record 0.41 goals against average…her three assists were tied for second among midfielders…tallied the game-winner in Carolina’s 3-0 win over UNCG (9/15)…recorded an assist in the NCAA Tournament First Round against Alabama State (11/11), notching her first point in NCAA postseason play.

2015: Appeared in 19 of 20 matches, making 18 starts…finished the season with three points on one goal and one assist…registered her first career goal against Charlotte (9/7), netting the game-winner in the sixth minute…also tallied an assist in the win over the 49ers…recorded 11 shots on the year, putting five of them on frame…helped the Gamecocks finish the season with six shutouts as a holding midfielder…made the start in each of South Carolina’s two postseason matches against Auburn (11/4) and UNCW (11/13).

2014: Played in 22 of 25 matches in her freshman season, logging 642 minutes, mainly in the midfield…sent six of her 11 shots in on frame…played 47 minutes in her collegiate debut in the season opener at ECU (8/22)…put one of her two shots on frame against Samford (8/24)…recorded a shot against rival Clemson (9/5)…put both of her chances on goal against High Point (9/7) as she played 50 minutes…also fired a shot at USF (9/12)…logged a season-high 51 minutes in the double overtime win at Auburn (9/21) in the SEC opener…fired a shot on frame against Missouri (9/26)…also logged shots at Kentucky (10/10) and vs. Florida (10/16)…put a pair of shots on goal vs. Mississippi State (10/30) in the regular-season finale…saw action against Missouri (11/5)in the SEC Tournament and played in every NCAA Tournament contest in the run to the NCAA Quarterfinals.