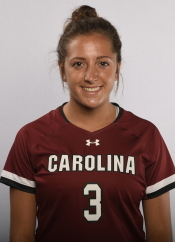 2018: Started all 21 matches for the Gamecocks… Made first career start against Fordham (8/17), playing in 67 minutes… Made first career SEC start against Tennessee (9/16), playing in 85 minutes… Registered one assist in the 3-0 win over Kentucky… Played in 172 of the 180 minutes in the SEC Tournament and 171 of the 180 in the NCAA Tournament… Finished with 17 shots, including eight in the last five matches.

2017: Saw time in six games, including three SEC matches…recorded a shot on goal in the opening round of the NCAA Tournament against Alabama State (11/10) after playing a season-high 25 minutes…appeared in Carolina’s NCAA Tournament third round match against Santa Clara, totaling 12 minutes on the field…totaled 87 minutes of playing time for the season.

2016: Saw time in 20 matches in her first year at Carolina…her 20 appearances ranked second among freshmen and were the most by a first-year defender…appeared in two of Carolina’s NCAA Tournament matches, playing a season-high 60 minutes in the opening round against Alabama State (11/11)…saw time in the NCAA Elite Eight against fifth-ranked UNC (11/25) and also was on the pitch for both of Carolina’s SEC Tournament contests against Texas A&M (11/2) and Florida (11/4)…put two of her four shot attempts on the year on frame.

PRE-COLLEGE: Played club soccer at Eclipse Selection Soccer Club under head coach Rory Dames… helped Eclipse capture the Illinois State Cup Championship each year from 2012-15… was a member of the 2013 U.S. Youth Soccer National Championship team and the Elite Club National League (ECNL) National Championship squads in 2013 and 2014…served as a team captain while at Eclipse…took part in the U.S. Club Soccer id2 Camp in 2011 and earned a spot on the ECNL 2015 Best XI in San Diego…was a member of the 2013 ECNL Player Development Program in Madison, Wis. and the ECNL All-Event Team in Sanford, Fla. in 2013.

PERSONAL: Born Sept. 9, 1997…daughter of Joyce and Bob Koch…was an Illinois State Scholar and a member of the Chinese Club while at Cary-Grove… earned a spot on the academic honor roll for each semester…plans to major in computer science…enjoys playing basketball.

COACH SMITH ON REBECCA: “Rebecca is a defender, but she has the ability to play in the midfield or on the backline. She was essential for her club team, and she will bring a lot of experience to our group. She reads the game well and is very consistent.”