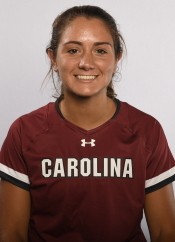 2019: Started a pair of matches for Carolina while making 16 appearances during the season… Assisted on one goal during the season while attempting five shots, three on goal… Assist came against then-undefeated Notre Dame (Sept. 12) in a 2-1 win… Played a season-high 45 minutes against Jacksonville (Aug. 28).

2017: Appeared in 22 of Carolina’s 23 matches…ranked fifth on the team and second among freshmen with eight points…boasted the fourth-highest scoring output on the team after netting four goals…her one game-winner on the season came against No. 23 Michigan (9/3) when she scored two second-half goals in a span of six minutes to hand Carolina a 2-1 victory…found the back of the net in her NCAA Tournament debut, scoring a first-half goal in the opening round against Alabama State (11/10)…one of five Gamecocks to total double-digit shots on the year…put eight of her 13 attempts on target.

PRE-COLLEGE: Competed for the Windy City Pride Soccer Club (WCP)…helped lead WCP to the 2013 U.S. Club Regional Title and the U-14 National Championship…part of the WCP U-17 squad that earned U.S. Club National Finalists honors in 2017…participated in the Illinois Olympic Development Program (ODP) and was a region II Pool Player from 2015-16…the WCP were finalists in the U-19 Presidents Day Tournament in Arizona…was a four-year varsity starter at Lincoln Way, earning All-Conference honors from 2014-16 as well as All-Sectional accolades…served as the team captain from 2015-17 and was named the Chicago Tribune Daily Southtown 2016 Soccer Athlete of the Year…received All-State honors in 2016…helped lead her team to a first-place conference finish in 2014 and 2015…her team was the Regional Champs from 2014-16 and Sectional Champs in 2014 and 2016, and they finished fourth in the state in 2014…tabbed the MVP, Sportsmanship Award honoree and All-Tournament selection after leading her school to the City Ram Classic Tournament Title.

PERSONAL: Born Sept. 27, 1999…daughter of Valeria and Kevin Galassini…tabbed an Illinois State Scholar as well as an AP Scholar with Honor Award in 2016…member of the National Honors Society and received the Academic Excellence Award…named to the High Honor Roll and was a 2016 Chicago Fire All-State All-Academic selection…plans to major in exercise science.

COACH SMITH ON BIANCA: “Bianca is someone who is a versatile player and always plays with a tremendous work ethic and toughness. She could play a defensive role, or more offensive depending on how the team shapes up at preseason. We look forward to seeing where she best competes at this next level.”