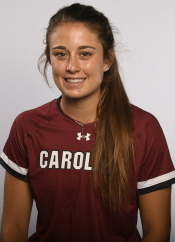 2018: Started all 16 matches she appeared in during the season… Season cut short due to injury… Helped the Gamecocks lead in the SEC in shutouts (12) and league-leading 0.56 goals against average… Aided in six-straight clean sheets, totaling 28 days without a goal allowed… Played the entire match eight times during the season.

2017: Appeared in 21 matches for the Gamecocks, making 20 starts as a center back…helped anchor a Carolina back line that conceded three or fewer shots on target in 16 of the team’s 23 games…the Gamecocks ranked first in the SEC and ninth nationally in goals against average (0.47) and set a single-season school record with 16 shutouts…her 1,827 minutes played were the most among Carolina freshmen and the sixth-highest total on the team…played all 90 minutes in five of the Gamecocks’ six NCAA Tournament matches…attempted three shots on the year, putting one a target.

PRE-COLLEGE: Participated in the U-17 U.S. National Soccer Team Camp in 2014 and was an attendee of the 2014 and 2016 Nike Elite Clubs National League (ECNL)…competed at the Olympic Development (ODP) 1999 Girls National Camp in 2013 and 2014 and was a member of the ODP International, Regional and State Team from 2012-15…played for the Jacksonville Futbol Club (JFC), helping to lead the team to three National Titles – U-13 U.S. Club Title, U-15 USYS Title, U-16 USYS Title…JFC was the U-14 U.S. Club National Finalist and captured three state titles…played one year at Duncan U. Fletcher High School, earning a spot on the varsity team as a freshman…earned All-Conference honors while at Duncan U. Fletcher.

PERSONAL: Born Feb. 16, 1999…daughter of Sarah Ann Coleman and John Declan Schaefer… her dad John played football at Boston University and her mom Sarah was a basketball player at Boston University…named to the “All A Honor Roll” each year throughout high school career…received an AP Scholar Award…majoring in nursing

COACH SMITH ON JACKIE: “Jackie has already joined our team this spring and shown what she can do on the field. She’s a very talented player and is fitting right in with the returning players. She had prepared well and brought a tremendous level of fitness with her to be able to perform at a top level. She has emerged as a young leader and it’s exciting to see the potential she has already shown. We are looking forward to seeing her grow from here.”