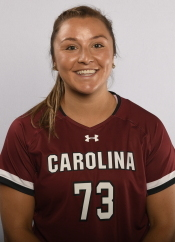 2017: Started all 23 matches in her lone season with the Gamecocks…finished with one point after registering an assist in Carolina’s 1-0 victory over Santa Clara in the third round of the NCAA Tournament…put a shot on target in the NCAA Women’s College Cup semifinal match against top-seeded Stanford…finished the season with 15 shot attempts.

PRE-COLLEGE: Played club soccer for the Carolina Elite Soccer Academy (CESA) of the Elite Clubs National League (ECNL)…helped lead CESA to seven South Carolina State Titles…guided CESA to the U.S. Youth Soccer Southern Regional Championship in 2012, earning MVP honors along the way…CESA reached the 2013 ECNL Top 16…named to the ECNL All-Event Team three times and served as a team captain throughout her time with CESA…played four years at Christ Church Episcopal School…led her school to the 2012 SC A/AA State Title and was named the NSCAA SC Player of the Year in 2013…earned NSCAA Scholar All-America honors and landed on the NSCAA All-South Team in 2012…selected as a 2013 NSCAA All-American…grabbed a spot on the All-Region Team all four years and was a three-time All-State honoree…holds the school single-season records for goals (58) and assists (31), and her 169 career goals also rank first…played basketball and golf for one year while in high school.

PERSONAL: Born Oct. 26, 1994…daughter of Sean and Cindy Carrigan…selected to Christ Church Episcopal School’s Academic Honor Roll and was a member of the National Spanish Honor Society…her father Sean played baseball at Villanova…plans to get her master’s degree in International Business.