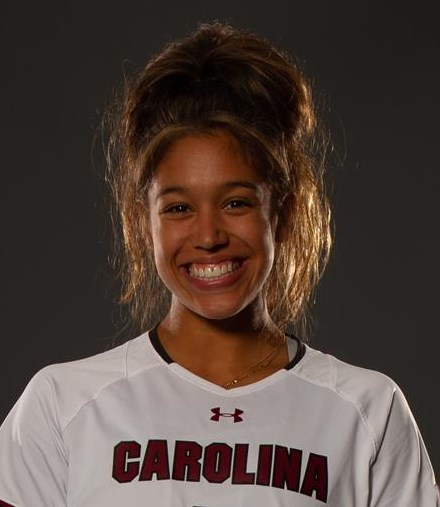 2019: Was named to SEC Preseason Watch List… Appeared in all 24 matches for the Gamecocks, starting in 23… Tied for the team lead with six goals and led the team in assists (9)… Her nine assists is tied for the ninth-most in a single season in program history… Her 21 points led the team and made her the first Gamecock, not named Savannah McCaskill, to have 20 points in a season since 2013… Led the team with five game-winning goals which was also good enough for the second most in the SEC… She scored in the first three matches of the season (No. 21 NC State, William & Mary and Jacksonville), which were all game-winning goals… Scored insurance goal against Alabama in the Gamecocks largest comeback in program history (down 2-0 before winning 5-2)… Scored the game-winning goal on Senior Night against Ole Miss… Scored in her final regular season SEC match against Auburn, scoring the winning goal in the 24th minute… Added two assists in the 2019 NCAA Tournament for the Gamecocks including one against Samford and the other against Notre Dame… Had at least one shot in 19 of 24 matches during the 2019 season… Was a part of the senior class that had the best home match winning percentage and overall winning percentage at the time of her graduation in 2019.

2017: Made the start in each of Carolina’s 23 matches…tied for first on the team with a career-best eight goals…sported career highs in points (17) and game-winners (4), both of which ranked second among Gamecocks…her eight goals were seven more than she had during her freshman campaign…three of her four game-winning tallies came against ranked foes, including a goal in the 80th minute against No. 17 Florida that secured the 2017 SEC Regular-Season Title for the Gamecocks…netted the decisive goal in Carolina’s 1-0 victory over No. 4 Clemson with a tally in the first half…recorded three points in the NCAA Tournament opening round against Alabama State (11/10) after scoring a goal and recording her first career assist…put 17 of her 38 shots on frame.

2016: Appeared in 22 of Carolina’s 24 matches…totaled two points on one goal, finding the back of the net in the First Round of the NCAA Tournament against Alabama State (11/11)…her two points led all freshman, and she was the lone Gamecock newcomer to net a score…finished the year with six shots on goal and saw time in each of Carolina’s four NCAA Tournament matches.

PRE-COLLEGE: Was a member of the Honduran U20 National Team for the 2015 World Cup Pre-Qualifer games…played club soccer for Gwinnett Soccer Association (GSA) 98 under head coach Chapman Campbell…helped lead GSA 98 to the 2014-15 Southeast Conference Championship…competed in the GA ODP as well as the Region III player pool for five years…was a four-year letter winner at Buford High School under head coach Andrew Eager…earned All-County honors in her first three years at Buford after helping the program capture the Regional Championship each season during that stretch… was named the Player of the Year for the 2014-15 season…received the Buford Excellence Award as a junior… also lettered in track while at Buford.

PERSONAL: Born May 26, 1998…daughter of Vickie and Alex Bahr…received academic honors three times while at Buford High School…plans to major in business…her father Alex played professional soccer in Honduras and Mexico and for the Atlanta Silverbacks…enjoys watching movies.

COACH SMITH ON ELEXA: “Elexa’s an outstanding attacking player that will contribute in the forward or central midfield position. She’s a goal scorer, but she can also deliver the final pass and set someone else up to score. She will add another dynamic to our attack in the fall.”