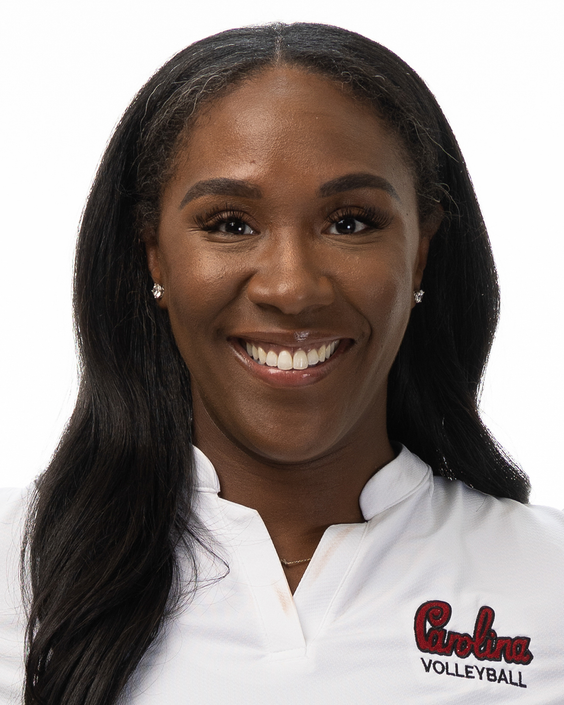 Already one of the most decorated student-athletes in Gamecock volleyball history, Shonda (Cole) Wallace has been a member of the coaching staff since 2014, and began as a full-time assistant coach in 2015. She also serves as the program’s recruiting coordinator.

In 2015, her first season as a full-time assistant, Wallace was a key influence on the pin hitters. She helped senior Sarah Blomgren shatter career bests in almost every offensive category, and developed Dessaa Legros into one of the most fearsome hitters in the SEC. Year two as a full-timer was highlighted by the top four hitters working under her tutelage, including SEC All-Freshman performer Mikayla Shields. Shields would actually break a few of Wallace’s freshmen records in 2016, and was rewarded with AVCA All-Region honorable mention honors and a spot on Team USA’s U19 team. Shields would evolve into one of the best opposite hitters in the country under Wallace’s direction in 2017, making the All-SEC, AVCA All-Region and Honorable Mention All-American teams.

Off the court, Wallace also earned one of the highest honors bestowed on a Carolina athlete, as she was named to the athletic department’s Hall of Fame class of 2016. She becomes just the third woman from the program to make the Hall of Fame, joining Ashley Edlund-Heidtke (1995-98, inducted in 2010) and Heather Larkin (1994-97, inducted in 2012).

Prior to returning to South Carolina, Wallace had a successful professional career overseas, playing one season in Spain (2007-08), six seasons in Puerto Rico (2009-14) and a half season in France (2013). She won a league championship with Pinkin de Corozal in 2010 and was named finals MVP after leading Indias de Mayaguez to the league title in 2013. She earned recognition as league’s best server while playing for Caribes de San Sebastian in 2009. Wallace, who coached high school volleyball in the offseason for four years at Greenville High School in Greenville, S.C., also trained with the USA Volleyball National A2 Team in 2005 and 2006 and participated in the 2005 Pan American Games and World Grand Prix.

During her playing days at Carolina, Wallace became the first Gamecock to earn All-America honors, earning a spot on the AVCA Honorable Mention All-America Team in 2006. She was also an AVCA All-South Region selection in 2006, an Honorable Mention All-South Region honoree in 2005 and a three-time All-SEC selection, earning second-team honors in 2004 and 2005 and first-team honors in 2006.

Wallace finished her career ranked first all-time at South Carolina in kills per set (4.26), points per set (4.87) and attacks (4,181) and second in kills (1,775). She still holds the Gamecock single-season records for kills (703), kills per set (5.76) and attacks (1,541), all from the 2006 season. A native of Kings Mountain, N.C., Wallace earned her Bachelor of Arts from South Carolina in middle level education with a concentration in math and English/language arts.

Wallace lives in Columbia with her husband, Brandon. The two were married in the summer of 2019.