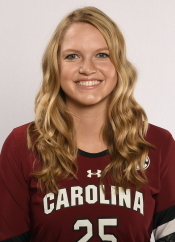 Enjoyed her best season, playing in 11 matches and 30 sets
Started as a defensive specialist for the final eight matches of the season
Earned her first career start at Tennessee, and responded with seven digs as a back-row defender (11/3)

Saw action for the first time in her college career, playing in five sets over four matches

Missed the season due to injury

Courtney Anderson McKeag is the daughter of Steve and Alana McKeag
Has one sister, Kelsey
Chose South Carolina because of the volleyball staff and the campus
Majoring in criminal justice