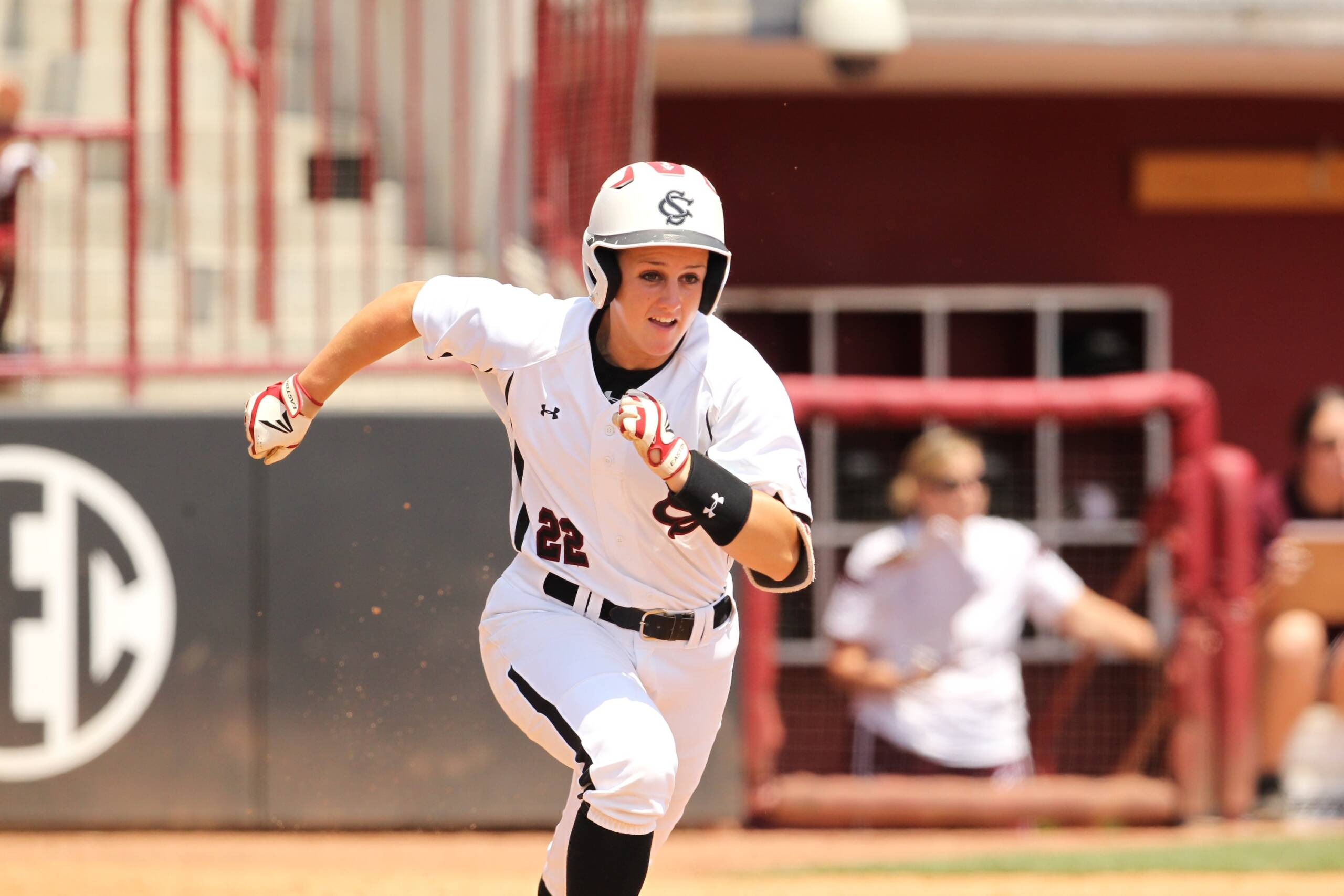 Keeping the best in-state talent is a big part of recruiting and has been critical for South Carolina softball coach Beverly Smith in restoring the program to national prominence. Now in her sixth year leading the Gamecocks, Smith’s four seniors in 2016 were part of her first group of recruits and all hail from cities within two hours of the Columbia campus.

“They signed on and took a chance on us, and me as a coach cutting her head coaching teeth in the SEC,” Smith said. “I think they will look back and be proud of how they are leaving the program. Seeing the changes that they were a part of, I hope it warms their hearts because the seniors really have made a huge impact not only in terms of wins, but also with the culture. Now our freshmen come in and there are certain standards and expectations that have changed, and this senior class had a lot to do with that.”

Smith noted that while she has to recruit nationally, it’s extremely important to lock up the best talent in her own backyard.

“It’s my number one priority to make sure we get the top talent in South Carolina to stay home,” Smith said. “I also think it’s important to blend the kids who have grown up wanting to be Gamecocks and ‘bleed garnet’ with the others we recruit nationally. We know they want to be here and compete in the SEC, but they don’t always understand what it means to be a Gamecock. Having that balance with our local kids allows them to infuse that Gamecock passion into the out-of-state talent. That’s important.”

Alaynie Page (Boiling Springs, S.C.), Lauren Masters (Evans, Ga.), Jordan Bizzell (Hartsville, S.C.) and Ansley Ard (Sumter, S.C.) have helped the Gamecocks reach the NCAA Tournament in each of their first three seasons, and they’re hoping that 2016 will solidify their legacy as “local” talent who made a difference in the building of a program.

Smith was hired in July of 2010 and in addition to finding players for her first season in 2011, she had to get to work in securing commitments from prospects who wouldn’t be on campus until a couple of years later. While this may seem like Smith was ahead of the game, in the world of softball recruiting, she was still trying to catch up as young players are recruited at increasingly earlier ages.

Page and Bizzell played on the same summer travel team, and they were among the recruits Smith brought in for a recruiting visit during the fall. While that first recruiting weekend was memorable, not everything went as planned.

“We took them to the South Carolina/Georgia football game, and keep in mind, this is my first recruiting visit as a head coach,” Smith recalled. “We sat in traffic on the way to the game for two hours, so the recruits and I ended up getting out of the van and walking to the game while our assistants stayed with the parents and waited. It was a great game, thank goodness, so it was fun, but behind the scenes it was a nightmare.

“Then at practice, (former catcher) P.J. Fulmer got hit in the mouth and knocked her front teeth out. So then I thought, ‘Perfect. My first practice with recruits, and we have a player lose some teeth.’ But they still decided to come!”

I definitely plan on us going further this year, and I’m going to do everything in my power to do that.

Even though she was late in the game when it came to recruiting that class, she was confident that those early connections with in-state athletes would pay off.

“I knew they were South Carolina girls, and they really wanted to be Gamecocks,” Smith said. Each had their own reasons why South Carolina was the right fit, but common themes were the benefit of being close to home, a family atmosphere within the program, and competing in the best conference in the country.

“You could just feel the great atmosphere and support you would have when you got here,” Page said of her campus visit. “It makes you feel at home knowing that the people here were going to support you no matter what. It’s like being home, knowing your parents will always support you.”

“My grandmother and my mom graduated from here,” Bizzell said. “Family is a big part of me, and I do like to have them close. The campus is just beautiful, and I just wanted to come here and make a difference with the softball team. I wanted to play in the most competitive conference that there is, so South Carolina and the SEC were a great fit.”

“When I was on my visit, I remember sitting in the stands, and they talked about being a family,” Ard recalled. “It doesn’t matter if you’re a freshman or a senior. We’re all one team and one family. I was definitely looking at schools that were around South Carolina, and both of my parents are South Carolina graduates. I did want to play in the SEC.”

Lauren Masters had originally committed to North Carolina State, along with her older sister Ashlyn. When former Wolfpack head coach and current South Carolina associate head coach Lisa Navas was not re-signed in Raleigh, Masters followed her sibling to Columbia after being released from her National Letter of Intent.

“I wanted to go wherever Coach Navas ended up,” Masters said. “With my sister already being here, it seemed like the perfect fit. I am so blessed to this day that Coach Bev welcomed me with open arms. Before I made the decision, the distance from home wasn’t a factor for me, but later on I became so appreciative that I am close to home. My mom comes to every one of my games.”

“They’ve all had a different path, but I’m really proud of their journey and how they got here,” Smith said.

Not all freshmen can step on to the field and make an immediate impact in college. This is where player development and nurturing by the coaching staff becomes critical to keep the student-athlete from losing confidence in their abilities. Each of the seniors has taken a different path to get them where they are today as impact players in the program.

“That’s the neat thing when you look at this class and their body of work,” Smith said. “Alaynie Page was an everyday player her freshman year. You could say she had a sophomore slump, and then was an All-American during her junior year. Ansley Ard has battled through injury and surgery and has had the challenge of battling back, but she was a solid contributor for us last year. Lauren is also somebody who fought through some injuries, but she was an everyday player for us last year. She has had to play multiple positions here, but we just love the grit she plays with and the competitiveness that she brings to the game.

“Jordan Bizzell had a freshman year that was probably a learning curve with the adjustment and transition, but when you look at where she is now, I think it speak volumes about the program and how our staff is able to develop players. That is something I am proud of. How we can get them to reach their potential is really rewarding for us because now you look at this class, and all four of these seniors are going to be everyday players who have a huge and lasting impact on the program.”

That player development isn’t lost on this year’s seniors.

“In my freshman year, I was so excited, and I think that carried me a little bit,” Page said. “In my sophomore year, my mentality was weak. In my junior year, I decided I wasn’t really happy with how I did my freshman or sophomore year, and I told coach that I can do better. Now that I’ve found out how to do it, I’m so excited about a new year.”

“I had to regain the confidence that I used to have,” Bizzell said. “It can be overwhelming when you first come in because you’re in the SEC, and you’re the youngest on the team. The coaches helped me take the mentality that I was here to leave a good legacy and that I wouldn’t be here if they didn’t think I could do it.”

“Our coaches are always encouraging,” Ard added. “I was injured my freshman year, but they don’t just put you aside. They include you in everything.”

I’m such a competitive person. I don’t know if it’s even possible to be hungrier than I always have been.

“You come in and you expect college to be one way, and there can be a complete culture shock,” Masters said. “Our coaches push us to be our best every day, but they also keep us grounded in that we play a sport of failure. (Assistant Coach Calvin Beamon) talks a lot about ‘small victories.’ It’s not looking at the times you missed, but the time you succeeded and really hold on to that.”

The program continues to grow with the Gamecocks reaching the NCAA Tournament in each of the quartet’s first three seasons. The seniors are chomping at the bit to keep the program moving forward in 2016 with the hopes of reaching the Women’s College World Series in Oklahoma City (OKC).

“I’m such a competitive person,” Masters said. “I don’t know if it’s even possible to be hungrier than I always have been. It makes me want everyone else to be as hungry as I am. I want to go out with a bang. I want to go all out at practice, embrace the soreness and all the little things that I won’t get to have again. We definitely want to make it past regionals and get to the World Series.”

“I want us to be considered one of the top SEC teams,” Ard said. “I want us to have the highest standards possible. I definitely plan on us going further this year, and I’m going to do everything in my power to do that.”

“I want to have confidence in everything I do,” Bizzell said. “I’ve put the team before me, and I just want to help us succeed. I expect for us to make it to OKC.”

Look for Part 2 of our series on the Gamecock Softball Seniors next week.